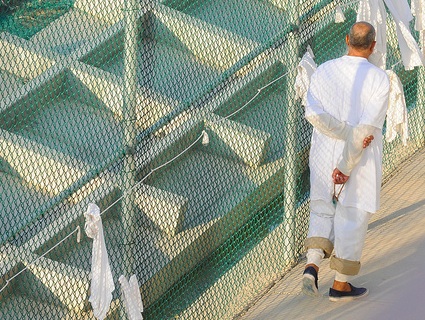 The revolt at Gitmo is growing.

A hunger strike at the detention center has now swelled to what may be the largest act of civil disobedience in the camp’s history, with at least 100 of the camp’s 166 detainees refusing to eat. Beginning in February after detainees claimed guards were searching their holy books, the protest has since broadened into what observers have called an “act of despair” over being held indefinitely without trial. “The fact that so many detainees have now been held at Guantanamo for over a decade and their belief that there is still no end in sight for them is a reason there is a growing problem of more and more detainees on a hunger strike,” Sen. Dianne Feinstein (D-Calif.), the chair of the Senate intelligence committee, wrote in a letter to National Security Director Tom Donilon last Thursday.

President Barack Obama’s administration maintains it is doing everything it can to close the facility. But in her letter, Feinstein called on the administration to renew its efforts to transfer the 86 Gitmo detainees who have been cleared for release. Could Obama quell the uprising by resuming transfers out of the camp?

Without a resumption of transfers, the detainees who remain in Gitmo—even those who the George W. Bush and Obama administrations agreed are no longer threats—are likely to die there. More detainees have died in detention than been successfully tried in military commissions, and no detainees have been transferred from the camp since September 2012. Daniel Fried, the special envoy whose job it was to persuade countries to take Gitmo detainees, was reassigned in January. Many of the remaining detainees are Yemeni. Given the ongoing turmoil in their home country and the presence of Al Qaeda in the Arabian Peninsula, the Obama administration sees sending them back as a security risk—and has yet to lift a self-imposed ban on transfers to Yemen it adopted three years ago.

“I think resuming transfers would be tremendous and give the men hope,” Pardiss Kebriaei, an attorney with the Center for Constitutional Rights who has two clients detained at Gitmo, told Mother Jones. “I don’t know if it would end the strike, but it would help lift the absolute despair that gave rise to the strike and led at least two men to attempt suicide in recent weeks. But another false start toward closure would be equally if not more devastating. A trickle of transfers that ultimately grinds to a halt won’t be enough.”

Congress has done everything it can short of making transfers illegal to prevent the administration from sending Gitmo detainees elsewhere. Current law states that the secretary of defense has to certify that, among other requirements, the detainee being transferred won’t ever pose a threat in the future, which is ultimately not something the administration can control. Although the rate of former Gitmo detainees who later join terrorist groups is relatively low—and lower than it was during the Bush administration—any failure would be politically toxic, and the certification process ensures that the Obama administration would bear full responsibility. “The restrictions have made it extraordinarily difficult, and that the process is fraught with legal hurdles,” said a defense official. “Some of the things that we are asked to do simply cannot be verified.”

But “extraordinarily difficult” isn’t the same as impossible, says Daphne Eviatar, an attorney with Human Rights First. Politically, “the no-risk option is always to leave even innocent people behind bars indefinitely. But as Obama acknowledged when he first took office, that’s not an acceptable solution for the United States, and it will undermine our national security in the long run,” Eviatar says. Resuming transfers “would give detainees hope that there is a way out of Guantanamo, other than death.”

By resuming transfers, the Obama administration might be able to end the strike. But doing so would entail taking on a significant amount of political risk—and, the administration believes, national-security risk as well.

“The secretary of defense could just boldly issue the required certifications, bulling past the question of whether they were truly met,” says Robert Chesney, a law professor at the University of Texas School of Law who served on the Obama administration’s task force on detention policy. “With or without a certification requirement, of course, these days all releases carry political risk since a former detainee committing a terrorist act would almost certainly be blamed on the administration anyway.”

Meanwhile, the hunger strike continues to grow. The actual number of detainees on strike may be even higher than 100, because the military only counts detainees who have missed nine meals in a row. Just two weeks ago, only 52 detainees were on strike. Twenty-one detainees are now being force-fed—something the American Medical Association says violates medical ethics—and the Pentagon announced Monday that around 40 medical personnel had been sent to cope with the effects of the strike. Kebriaei’s clients have told her several detainees were “skeletal” and “near death.”

She spoke to them more than two weeks ago.