Dzhokhar Tsarnaev apparently maintained an active Twitter account. A high school classmate of the at-large Boston Marathon bombing suspect has confirmed to BuzzFeed that the @J_tsar Twitter account belongs to Tsarnaev, and multiple Twitter users who say they are friends of Tsarnaev have pointed to this Twitter feed as his. The tweets on the @J_tsar account cover a variety of topics, including religion and pop culture, and contain much trash talk about women. The user of this account kept on tweeting after the bombing. On April 15, hours after the attack, he tweeted, “Ain’t no love in the heart of the city, stay safe people.” On April 17, he tweeted, “I’m just a stress free kind of guy.” Here’s a sampling of odd, mundane, and chilling tweets from the account from the past year, including one in which the user laments, “The value of human life ain’t shit nowadays.”

Nowadays everybody wanna talk like they got somethin to say but nothin comes out when they move their lips; just a bunch of gibberish

Ain’t no love in the heart of the city, stay safe people

Most of you are conditioned by the media

-you don’t care that I smoke, right? -man, I wouldn’t care if you shot yourself in the head ^friendship

I really don’t like it when I have one ear pressed against the pillow and I start to hear my heart beat, who can sleep with all that noise

That homework that I was supposed to do, yeaa I’m still doing it

Evil triumphs when good men do nothing

in my time, as an uncle of 4 now, I can tell you that Sesame Street teaches kids nothing useful except the alphabet and how to count to ten

Wouldn’t it be pretty cool if someone that you weren’t too fond of was just like, “yu know I must be a bother, let me just fuck off” #iwish

I don’t argue with fools who say islam is terrorism it’s not worth a thing, let an idiot remain an idiot

Brothers at the mosque either think I’m a convert or that I’m from Algeria or Syria, just the other day a guy asked me how I came to Islam

Idk why it’s hard for many of you to accept that 9/11 was an inside job, I mean I guess fuck the facts y’all are some real #patriots #gethip

This is a Tweet that Tsarnaev retweeted on election day:

This happened because of you. Thank you.

I am the best beer pong player in Cambridge. I am the #truth

@therealabdul_ boston marathon isn’t a good place to smoke tho

apparently, game of thrones is that shit!

hhmmm get breakfast or go back to sleep, this is always a tough one

how i miss my home land #dagestan #chechnya

a decade in america already, i want out

The user of this account also tweeted this on Election Day last year: 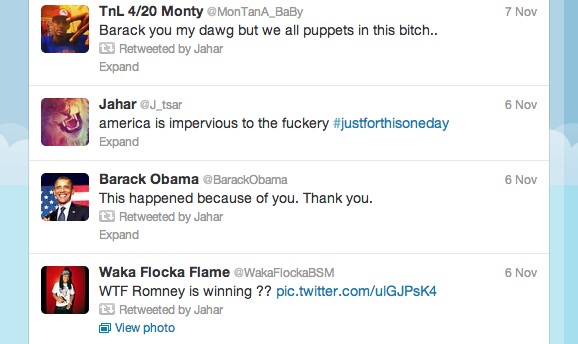