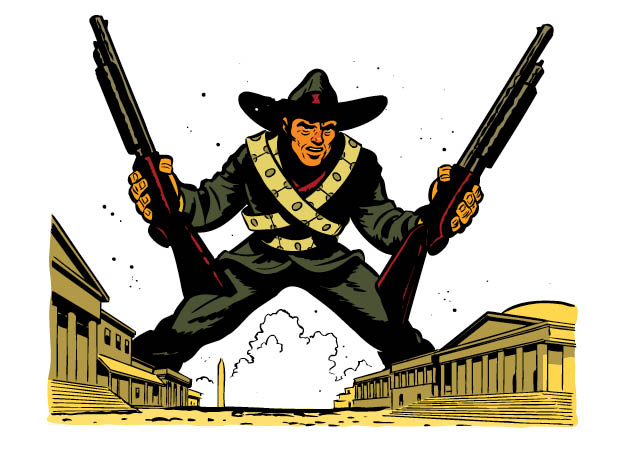 “This election is going to be won on the ground,” Chris Cox, the National Rifle Association’s top lobbyist, told me early last year as the gun lobby prepared to launch its all-out campaign to defeat Barack Obama. Historically, pro-gun voters have favored Republicans by a margin of 2- or 3-to-1, but that only matters if they vote. And, Cox stressed, millions of gun owners were not registered yet.

The NRA’s get-out-the-vote effort, its most ambitious ever, would target gun owners from all angles. Its field workers would register them at gun shows and gun shops in battleground states such as Florida, Ohio, and Virginia. The NRA spent millions on TV spots; one seven-figure ad buy last October attacked the president for “chipping away” at Second Amendment rights, urging Americans to “defend freedom.” Chuck Norris, a spokesman for the NRA’s Trigger the Vote campaign, warned apathetic gun owners, “I’ll come looking for the people who sat this election out.”

Mobilizing the NRA’s estimated 4 million members “is always a critical part of the equation for us on the Republican side,” says Charlie Black, a veteran GOP operative who was an adviser to Mitt Romney’s and Sen. John McCain’s presidential campaigns.

But 2012 was different: The NRA wasn’t simply reaching out to its core constituency—it was reeling in big checks from conservative funders eager to take advantage of its grassroots muscle. The arrangement was mutually beneficial: The NRA burnished its reputation as a political force to be reckoned with, while donors invested in the kind of all-out GOTV effort they had once expected from the Republican Party itself.

Overall, the NRA spent just north of $25 million on last year’s election: $7 million supporting Republican candidates, and $18 million attacking Democrats. This spending spree was boosted by the Supreme Court’s 2010 Citizens United ruling, which paved the way for activist groups to raise and spend unlimited amounts explicitly promoting or attacking candidates. The NRA also appealed to patrons who preferred to fly under the radar: The organization and its lobbying arm are both 501(c)(4) “social welfare” nonprofits and do not have to reveal their donors.

The NRA likes to note that it has always been heavily dependent on membership dues and small donors. But in recent years it has pushed hard to corral major donors, starting with gun manufacturers. Since 2005, many of its biggest benefactors have come from the gun industry, which has relied on the group to fight some major legal and political battles. By 2011, some 50 gun giants had ponied up between $14 million and $38 million for the NRA’s “Ring of Freedom” fundraising drive.

But in the past couple of years, the NRA has also turned to deep-pocketed conservative allies. Last year an organization allied with the donor network of billionaire brothers Charles and David Koch gave between $2 million and $3 million to the NRA’s election efforts, according to two Republican fundraisers familiar with the gun group’s campaign work. The gift, said one of the fundraisers, was seen as a smart investment beyond what the Koch-affiliated Americans for Prosperity was already doing to boost conservative turnout. (The NRA did not respond to requests for comment on this story.)

Obama’s “rich, gun-hating friends…will shower him with the money he needs,” warns the NRA’s Chris Cox. “I don’t have friends like that.”

The NRA also forged stronger links with conservative advocacy groups. Crossroads GPS, the dark-money group cofounded by Karl Rove, funneled at least $600,000 to the NRA’s lobbying arm, the Institute for Legislative Action (ILA), in the last two elections. Last year, NRA president David Keene attended strategy sessions hosted by American Crossroads, Crossroads GPS’s sister super-PAC, according to operatives who were there. These periodic confabs included a dozen or so key conservative players, including anti-tax crusader and NRA board member Grover Norquist and the Faith and Freedom Coalition’s Ralph Reed, who shared information about races and coordinated spending plans.

The NRA has long helped its allies round up money for their campaigns. But in recent years, some high-profile politicians have returned the favor, helping to rope in sizable donations for the group. Last September, Arizona Gov. Jan Brewer teamed up with ex-NRA president Sandy Froman as a featured guest at a $250-a-head gala for the NRA-ILA. In May 2011, soon-to-be presidential candidate (and Texas governor) Rick Perry joined NRA frontman Wayne LaPierre at a couple of NRA fundraising events in Austin and Houston. 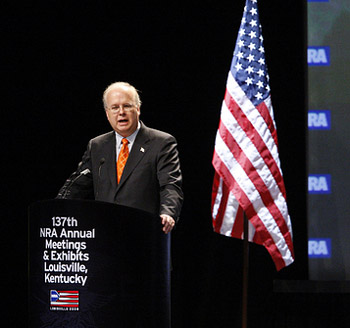 One, a luncheon held at Houston’s posh Coronado Club, featured a pep talk by oil and gas magnate Clayton Williams, a longtime NRA supporter who said he’d donated $1 million to the NRA’s Freedom Action Foundation in 2010, and promised to do so again in 2012. Perry also pitched in at events outside the Lone Star State, according to an NRA board member who requested anonymity. The governor, he says, was “very helpful.”

In the end, though, the 2012 election was a major disappointment for the NRA. Beyond Obama’s reelection, Democrats won six out of the seven Senate races that the gun group spent heavily on. Overall, a little more than 4 percent of its outside spending went to candidates who won their races.

Meanwhile, the NRA is facing new pressure from gun control groups, which are starting to enter the outside-spending game. Former Arizona Rep. Gabrielle Giffords’ Americans for Responsible Solutions is aiming to raise about $20 million for its super-PAC to spend in 2014. In February, New York Mayor Michael Bloomberg’s self-funded Independence USA super-PAC spent $2.2 million to help a pro-gun-control candidate win the Democratic primary for the Illinois House seat once held by Rep. Jesse Jackson Jr.

Still, gun control advocates have their work cut out for them: Since the Newtown school massacre, the NRA has kicked off an aggressive fundraising effort, warning once again of impending catastrophe for gun owners. In an email to members, Cox cautions that Obama’s “rich, gun-hating friends” like Bloomberg “will shower him with the money he needs to strip you of your gun rights.” He continues, “I don’t have friends like that. I’ve got something much better…YOU.”