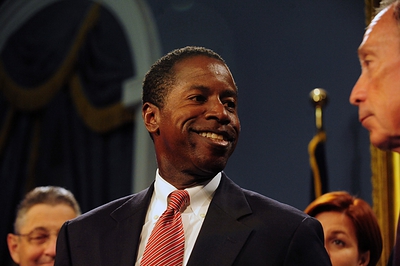 It was a ham-handed scheme straight out of an episode of “Law and Order.” Federal prosecutors revealed on Monday that New York State Sen. Malcolm Smith, a Democrat, allegedly tried to bribe his way onto the New York City mayoral ballot—as a Republican. Envelopes stuffed with cash changed hands in hotel rooms and restaurants. Local Republican officials talked about “money greasing the wheels” and “the fucking money” driving local politics. Smith’s plan depended on paying off two Republicans from Queens who could get his name on the ballot in time for the November election. Instead, an undercover FBI agent and a cooperating witness infiltrated the deal and laid bare just the latest seamy corruption scandal to rock New York politics.

Preet Bharara, the US attorney in Manhattan spearheading the Smith case, told reporters on Monday that “today’s charges demonstrate, once again, that a show-me-the-money culture seems to pervade every level of New York government.” New York City Councilman Daniel Halloran, one of the two Republicans allegedly implicated in Smith’s scheme, would seem to agree. In the complaint filed against Smith et al, Halloran offers this nugget of wisdom:

The Smith scandal comes as a well-funded coalition of progressive groups are pressuring Gov. Andrew Cuomo and other legislators to pass legislation replacing the state’s current elections regime with publicly financed campaigns. Now, those reformers are pointing to the Smith scandal as further evidence that New York’s political systems need a major overhaul. “This is the kind of conduct that we believe comes out of a culture that is a pay-to-play, money first, voters don’t count culture,” Susan Lerner, executive director of Common Cause New York, told the Journal News. “What we’re trying to change is the role money plays in our political system.”

The editorial page of the Albany Times Union, a supporter of public financing, asked on Tuesday: “What better evidence can there be of the need for such reform than this case, in which one of their own, the onetime Senate president and Democratic leader, stands accused of trying to bribe Republican leaders to get a place on the ballot as a GOP candidate for mayor of New York City?”

The Fair Elections for New York campaign, the main force behind the public financing bill, said in a statement that the Smith scandal will only harden New Yorkers’ belief that corruption pervades every corner of state politics. “We can all agree the system is broken,” the statement reads. “Now it’s time to stand shoulder to shoulder with Governor Cuomo and the growing bipartisan majority of New Yorkers who support comprehensive campaign finance reform, which must include a system of publicly financed elections at its core.”