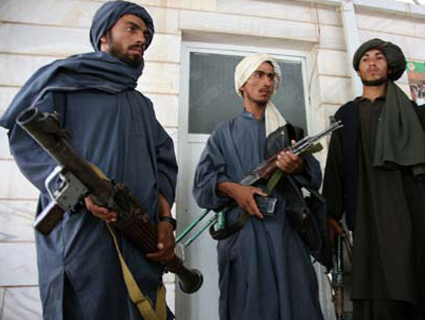 The Taliban, the violent Islamist movement, is responsible for a lot of bloodshed, many human rights violations, and some really mediocre and chauvinist poetry.

They are also at the forefront of protecting endangered falcons, however unintentional their conservation efforts may be.

Ashfaq Yusufzai has the story:

While the Taliban’s military activities continue to plague Pakistan’s northern Federally Administered Tribal Areas (FATA), the incessant violence has been a blessing in disguise for one creature: the falcon.

Declared endangered by the [International Union for Conservation of Nature], this bird of prey suffered for years at the hands of poachers and hunters, whose unfettered access to FATA and the adjacent Khyber Pakhtunkhwa (KP) province guaranteed the birds a short life span in the wild, with most destined to be trapped, killed or sold.

But “continued militancy has kept the poachers (and hunters) away,” Khalid Shah, an official at the KP Wildlife Department, told IPS, adding that the survival rate of falcons and some other migratory birds has “increased tremendously”. In 2005 only 2,000 falcons lived in these northern territories, but by 2008 wildlife officials had recorded an increase of up to 8,000 birds.

Experts trace this population growth to the beginning of the insurgency here, which began after the 2001 U.S.-led invasion of Afghanistan toppled the government in Kabul and sent scores of Taliban and Al Qaeda members across the border into Pakistan’s sprawling mountainous terrain. Being the U.S. ‘s ally in the so-called “war on terror”, the Pakistan army has engaged in a military offensive to root out the insurgents…Under fire from both sides, civilian residents say militancy has made daily activities – among them hunting and poaching — impossible.

On a related note, after the Taliban’s rise to power in Afghanistan, the regime made it illegal to own birds in cages. Also, a study conducted by scientists from the New England Aquarium determined that whales greatly benefited from the September 11 Al Qaeda attack on New York’s Twin Towers. But Islamist violence is probably not a net positive for local wildlife; during the Taliban’s takeover of Afghanistan in the ’90s, they ransacked the Kabul zoo, slaughtered animals, maimed a bear, threw a grenade at a lion, and left the other creatures to starve to death.

Accidental falcon conservation aside, the Taliban’s treatment of animals often mirrors their treatment of women.