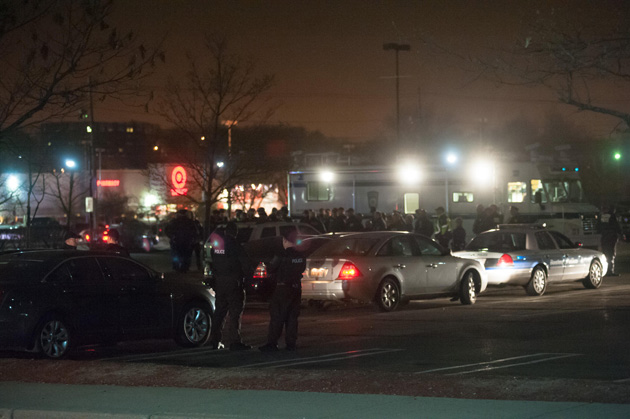 A police staging area at the Watertown mall on Arsenal St., the scene of a massive shooting in Watertown, MA.Jeremiah Robinson/Zuma

At approximately 10:20 p.m. April 18, police received reports of shots fired on the MIT campus. At 10:30 p.m., an MIT campus police officer was found shot in his vehicle in the area of Vassar and Main streets. According to authorities, the officer was found evidencing multiple gunshot wounds.

He was transported to Massachusetts General Hospital and pronounced deceased.
Authorities launched an immediate investigation into the circumstances of the shooting. The investigation determined that two males were involved in this shooting.

Police immediately began a search for the vehicle and were in pursuit of the vehicle into Watertown.

At that time, explosive devices were reportedly thrown from car by the suspects. The suspects and police also exchanged gunfire in the area of Dexter and Laurel streets. During this pursuit, an MBTA Police officer was seriously injured and transported to the hospital.
During the pursuit, one suspect was critically injured and transported to the hospital where he was pronounced deceased. An extensive manhunt is ongoing in the Watertown area for the second suspect, who is believed to be armed and dangerous.

UPDATE, Friday, April 19, 2:27 a.m. EDT: The Boston Globe is reporting that the shootout involves the marathon suspects, and that one has been taken into custody.

Multiple law enforcement agencies converged on Watertown, Massachusetts, a city near Boston, on Friday night after a police officer was shot and killed near the Massachusetts Institute of Technology campus in Cambridge and police officers reported automatic fire and explosions. At this time it’s unclear what connection, if any, there is between this incident and the Boston Marathon bombing suspects. You can listen to the Boston police scanner here, but please keep in mind that police scanner information is often chaotic and not always correct. Boston’s 7 News (WHDH) and WCVB have coverage. The New York Times’ Jess Bidgood and the Boston Globe‘s Wesley Lowery are tweeting from Watertown.

7 News meteorologist Chris Lambert took a photo of the scene in Watertown.