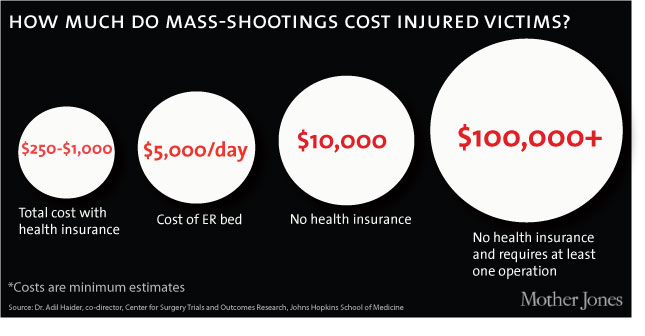 Connecticut officials announced a couple weeks ago that they are asking the 69 charities publicly identified as raising money for victims of the Sandy Hook Elementary School shooting in Newtown to explain how the money is being spent. The news arrived after dozens of families affected by other mass tragedies, like Columbine and Virginia Tech, urged the Sandy Hook charities to give the money directly to victims, arguing that in the past, money hasn’t been distributed effectively. Families are also petitioning the White House to establish a national fund so in the future, 100 percent of the money raised in the aftermath of mass shootings goes directly to victims. The local foundation in charge of most of the Sandy Hook donations (around $11 million) is still meeting with families and members of the community, and hasn’t yet distributed any of the money.

Mother Jones looked at the biggest charities set up for victims of mass shootings at Columbine High School in 1999, Virginia Tech in 2007, and a movie theater in Aurora, Colorado, in 2012. We found that donations can be slow-moving and are not necessarily sufficient to cover victims’ medical costs, but the majority of money given to the largest charities in the wake of a mass shooting does eventually make its way to victims and their families, instead of alternatives such as violence prevention, mental-health services, or memorials. 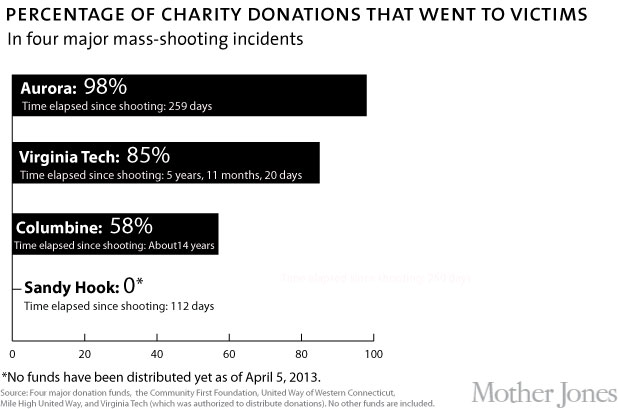 Charities to support specific individuals (as well as an untold number of phishing scams) often spring up in the wake of mass shootings, but in each of the shootings we studied, one charity managed a large bulk of the total contributions. After Columbine, for example, over $6 million was donated to 30 charities, but the Healing Fund, organized by Mile High United Way in collaboration with the McCormick Tribune Foundation, took in about $4.5 million of that total. In the case of Virginia Tech, donations were spontaneously sent to the university, which was authorized through executive order to distribute the funds. And after the Aurora theater shooting, the Community First Foundation took in the vast majority of the donations. These are the organizations we looked at.

At least $15 million has been raised for victims of Newtown, but most of the money, almost $11 million, has been raised by United Way of Western Connecticut, which passed control of the money to the Newtown-Sandy Hook Community Foundation, which has local Newtown residents on its board. Patrick Kinney, a spokesman for the branch, tells Mother Jones that the funds “will not be limited to families of the 26 deceased adults and children” or spent only on health care costs. Instead a board will work with the community to distribute funds to “those most profoundly affected by the tragedy, such as families, survivors, teachers, and first responders,” in both the short and long term. The foundation did not accept designated funds.

Addressing why funds haven’t been distributed yet, Kinney doesn’t give a date, but says, “I’m not trying to be weasely; it’s everyone’s priority to have this process move as fast as possible.” Another smaller fund, My Sandy Hook Family, has already started sending checks to families.

Claudette Carveth, spokesperson for the Department of Consumer Protection in Connecticut, tells Mother Jones that she doesn’t have any information on how United Way and other charities have been distributing money, but the charities are expected to respond by April 12.

“This is not an audit. This is about transparency—providing information that is not otherwise available to the public,” says Susan Kinsman, spokesperson for the Connecticut Office of the Attorney General. “We are unaware of any misdirected money or sham charities at this point.”

In the aftermath of mass shootings, victims and their families have criticized the response time of donations, the difficulty of proving “hardship,” and how the money was distributed, arguing that it shouldn’t necessarily go to nonprofits that don’t directly assist victims. After the Aurora shooting that took place in July, for example, the Community First Foundation, which collected about $5.8 million in funds, initially only distributed $5,000 to each family through the Colorado Organization for Victim Assistance (COVA). The fund didn’t distribute the remaining funds until November.

Sandra Miniutti, vice president of marketing and CFO for Charity Navigator, which evaluates charities across the United States, agrees that the process isn’t perfect, because “victims shouldn’t have to wait so long to receive assistance that donors intended for them to have.” But she points out that there is a place for charities in the donation process, “if for no other reason than giving to a charity provides the donor a tax-deduction and greater transparency and accountability in how the donation is spent. Giving directly to someone has a much greater potential to turn out to be a scam.”

The donation process at Virginia Tech also illustrates how complicated charity laws can be: Michael Pohle, whose son was killed at Virginia Tech, told the Denver Post that the shooting created a $100 million “windfall” for the university, and only about $10 million of that actually went to victims, or designated memorial funds. But Larry Hincker, a spokesman for the university, tells Mother Jones that the shooting happened in the middle of a major fundraising campaign, and the money was largely designated by donors to go to building construction, scholarships, or other program funds. “We couldn’t have easily distributed [the money] to those injured…the law doesn’t allow for that and donors designate their gifts.” He also maintains that the shooting had “no causal effect on our institutional fundraising.”

Mass shootings can be a devastating financial blow to victims and their families, especially if they don’t have health insurance. Dr. Adil Haider, the codirector of the Center for Surgery Trials and Outcomes Research at Johns Hopkins School of Medicine, tells Mother Jones that “if a person has insurance—it will mostly likely cover everything apart from the deductible.” But, he adds, “unfortunately, most of the patients we see do not have insurance.” If a victim is paralyzed by a gunshot wound, costs could easily surpass $1 million—although a patient could be eligible for Medicaid or disability at that point. The chart below shows the biggest amounts of money awarded to families of deceased or severely injured victims, but it’s not representative of the amount of money most patients receive: In Virginia Tech and Columbine, the most commonly awarded amount was $11,500 and $10,000, respectively, and payment amounts are often distributed based on number of nights spent in the hospital (after Aurora, victims who spent fewer than seven days in the hospital received $35,000).

“How much should people donate? As much as they can,” Haider says. Miniutti recommends that you give with your head, not just your heart. “Take the time to find the charity that is committed to providing the assistance that you want to fund—that could be helping the victims financially, preventing future gun violence, or providing funding for the mental-health issues that will develop overtime,” she says. “Make sure the charity is transparent.” 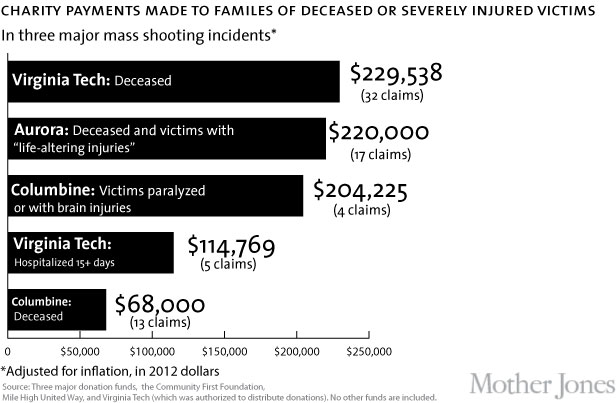