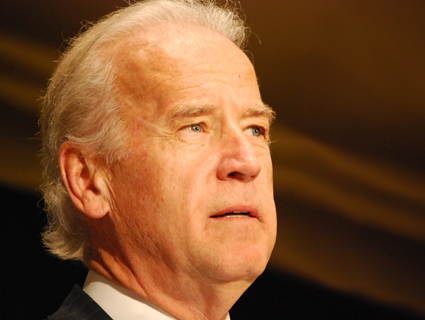 On Tuesday night, Buzzfeed reported that Vice President Joe Biden told an activist in South Carolina that he personally opposed the Keystone XL pipeline, but that he was “in the minority” in the administration on that opinion. The story prompted a press release from at least one anti-Keystone environmental group praising Biden for his “blunt talk.” But Biden’s office says that the VP’s opinion on Keystone hasn’t changed since an interview he gave last year: he’s still waiting for the State Department to weigh in.

A spokesperson for the VP’s office writes to Mother Jones:

The Vice President has made his views known on this issue and his views haven’t changed. Any impression to the contrary would be mistaken. For instance, he said of the project in an interview last year, “It’s going to go through the process and the decision will be made on an environmentally sound basis.”

The spokesperson also reiterated that “permitting decisions for international oil and gas pipelines are delegated to the State Department.”

The Buzzfeed story came from the account of Elaine Cooper, an activist with the Sierra Club, who says Biden told her this during a rope line at a campaign event in South Carolina last Friday. Cooper recounted the encounter in a blog post as well:

I asked him about the administration’s commitment to making progress on climate and whether the president would reject the pipeline. He looked at the Sierra Club hat on my head, and he said “yes, I do – I share your views – but I am in the minority,” and he smiled.

In Cooper’s post, she notes that Biden famously broke from the official administration position on gay marriage in an interview back in May 2012. His comment has been described as the “catalyst” for President Obama declaring just a few days later that he had evolved on gay marriage. This was apparently much sooner than the president had planned to make that announcement.

Was the Keystone line another case of Biden speaking out of turn? Who knows. Rope lines are crowded and loud, leaving room for misinterpretation.  Besides, those things are usually more about glad-handing than they are about serious policy issues. But hey! It wouldn’t be the first time the VP had staked out a position ahead of the rest of the administration.