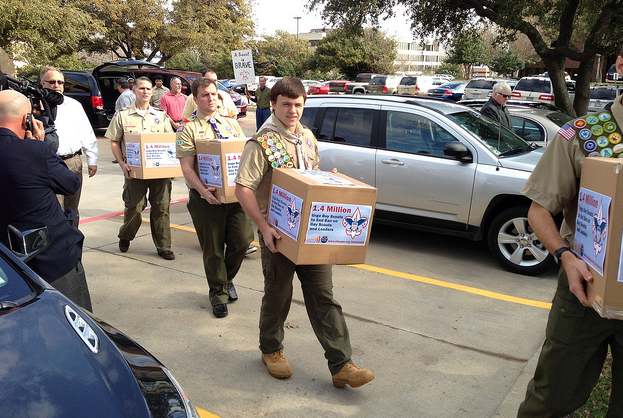 Today, on a muggy afternoon in Grapevine, Texas, members of the Boy Scouts of America‘s National Council voted 61-38 percent to stop discriminating against kids in the program on the basis of sexual orientation, overturning a national ban on gay Scouts that the organization has enforced for decades. The BSA will continue barring gay adults from serving as scoutmasters and volunteers, meaning that teenagers who come out during their time with the program could be booted after they turn 18. The decision is seen as a compromise between church groups that partner with the Scouts and those eager to see the program fully end its discrimination against gays.

“No youth may be denied membership in the Boy Scouts of America on the basis of sexual orientation or preference alone,” states the new resolution, acknowledging that “[y]outh are still developing, learning about themselves and who they are, developing their sense of right and wrong, and understanding their duty to God to live a moral life.”

“It’s an incomplete step, but still a step in the right direction,” Zach Wahls, an Eagle Scout raised by two lesbian mothers, and founder of Scouts for Equality, tells Mother Jones. His organization, along with Scouts, parents, and volunteers who support overturning the ban, have been rallying in Texas for days, across from the Gaylord Texan Resort & Convention Center, where more than 1,400 BSA voting members from across the United States cast their votes this afternoon. Scouts in uniform faced off against about two dozen protesters supporting than ban—and “a couple local guys driving by in trucks, saying anti-gay stuff,” Wahls says.

Controversy over the ban picked up last fall, when major backers like the Intel Foundation and UPS stopped funding the program because of its discriminatory policy. In January, the BSA said it would vote on the issue. The following month, President Obama said he supported overturning the ban, and celebrities like Carly Rae Jespen and Dr. Phil followed suit. There have been over 1.8 million signatures submitted through Change.org in favor of overturning the ban, according to Rich Ferraro, vice president of communications at GLAAD, a gay right group, in contrast to 19,000 signatures in favor of it, delivered by the Alliance Defending Freedom, a Christian organization.

The Boy Scouts, which was founded in 1910 with an oath promising that Scouts would be “morally straight,” have a long history of discriminating against gay members. In 1980, an Eagle Scout and aspiring Scout leader was kicked out for attending his prom with a male date. In June 2000, the US Supreme Court affirmed in a 5-4 decision that the Boy Scouts could continue barring gay Scout leaders. And as recently as April, 2012, an Ohio mom and den leader named Jennifer Tyrrell was forced out of the organization for being gay.

The new policy, which kicks in January 1, makes it so that member troops can no longer discriminate against gay youth. But anyone who is gay and over 18 years old still won’t be allowed to be a Scout leader or volunteer. (The Boy Scouts’ coed Venturing program, aimed at young adults, will allow gay members until they are 21.) This means that gay Scouts like 16-year-old Pascal Tessier can continue to participate in the program without fear of being kicked out, and will have the opportunity to earn the prestigious rank of Eagle Scout like his older brother has. But under the new policy, he would still be banned from the program when he turns 18.

When Mother Jones asked BSA whether or not it would eventually consider voting on the ban on gay adult members, a spokesperson said: “This is not about a step or progression…It is the option that did not, in some way, prevent kids who sincerely want to be a part of Scouting from experiencing this life-changing program and to remain true to the long-standing virtues of Scouting.”

Tyrrell, the mom ousted for being gay and still unwelcome under the new policy, said in a press release, “I’m so proud of how far we’ve come, but until there’s a place for everyone in Scouting, my work will continue.”