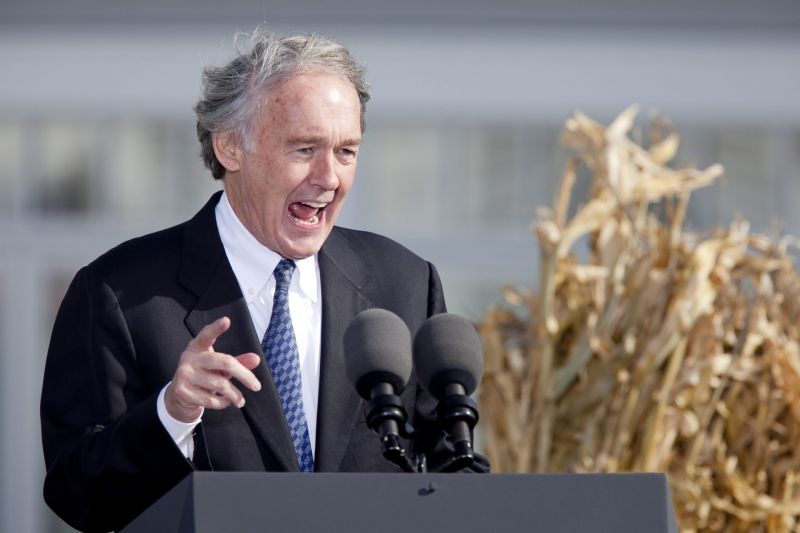 Congressman Ed Markey is one step closer to replacing Secretary of State John Kerry in the US Senate. On Tuesday, he cruised past Stephen Lynch, a fellow Democratic congressman, in the special Democratic primary in Massachusetts to fill Kerry’s vacated seat. With nearly all precincts reporting, Markey held a commanding lead of 57 percent to 43 percent over Lynch.

Markey will face ex-Navy SEAL Gabriel Gomez in a special general election to be held in late June. Gomez is a political newcomer. His only prior run for office was a bid to win a seat on the board of selectmen in tiny Cohasset, Mass. (He lost.) That didn’t stop Senate Majority PAC, a Democratic super-PAC, from describing Gomez as “Mitt Romney Jr.,” a businessman-turned-politician who wants to cut benefits for senior citizens and lower taxes for the wealthiest Americans. Gomez, for his part, has pledged to “reboot” Congress by instituting, among other changes, term limits for politicians and a lifetime ban on lobbying.

Markey has carved out a liberal record during his 20 terms in the House—a long political career that his opponents will no doubt use against him. Over those years, he has established a reputation as one of Congress’ leading advocates for protecting the environment and fighting climate change. He co-authored one of the most comprehensive pieces of legislation to address climate change, the American Clean Energy and Security Act in 2009, which failed to make it through Congress.

Markey’s strong environmental record helps explain why he got an assist in his win over Lynch from the San Francisco hedge fund investor and environmentalist Tom Steyer. Despite Markey and Lynch agreeing to a “People’s Pledge” to keep outside money out of their race, Steyer’s NextGen super-PAC spent more than $400,000 on online ads and microtargeting, often hammering Lynch over his support for the controversial Keystone XL pipeline. Steyer’s involvement added some drama to a off-year primary with a lackluster turnout.

Steyer says he will use his fortune, estimated at $1.4 billion, to drag the issue of climate change into the spotlight in American politics and to combat the influence of climate change deniers and the oil lobby. He’s taking a similar approach to the climate issue that New York City Mayor Mike Bloomberg takes on gun control: supporting candidates who see things his way and attacking those who do not. “Really, what we’re trying to do is to make a point that people who make good decisions on this should be rewarded, and people should be aware that if they do the wrong thing, the American voters are watching and they will be punished,” Steyer told the Hill.

Long active in California politics, the Markey-Lynch race was Steyer’s first big foray as an outside spender into a marquee Congressional race. He drew howls with an open letter giving Lynch a deadline of “high noon” to flip his position on the Keystone pipeline. But by the end of the campaign, Steyer’s spending appeared to have boosted Markey (even if the veteran congressman didn’t really need the help to win Tuesday’s primary). And a dedicated environmentalist is now on the cusp of filling John Kerry’s old seat—exactly what Steyer wants.

Steyer has yet to say if he’ll go after Gabriel Gomez in the general election. But he’s one for one so far, and given every indication he plans to spend a lot more money in the months and years ahead.