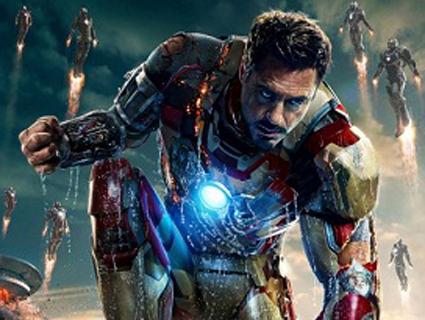 “There’s no politics here; it’s just good old-fashioned revenge,” Tony Stark (a.k.a., Iron Man) declares to a swarm of TV news reporters, following a terrorist attack that leaves a good friend of his in a coma. “There’s no Pentagon, it’s just you and me,” Stark says to his latest nemesis.

This statement also applies to the film itself.

The third installment in Marvel’s Iron Man series is the first in the franchise that wasn’t directed by Jon Favreau. The man at the helm this time around is writer/director Shane Black, who is famous for penning Hollywood action flicks like 1987’s Lethal Weapon, and for directing 2005’s Kiss Kiss Bang Bang, also starring Robert Downey, Jr. The first two films portrayed Tony Stark/Iron Man as he was intended to be depicted: as a suave, hard-partying, right-wing billionaire who battles America’s enemies, foreign and domestic. In the DVD commentary of the first Iron Man, Marvel frontman Stan Lee discusses why he created the character in the first place. He wanted to piss off some hippies:

It was the height of the Cold War. The readers—the young readers—if there was one thing they hated it was war, it was the military, or, as Eisenhower called it, the military-industrial complex. So I got a hero who represented that to the hundredth degree. He was a weapons manufacturer. He was providing weapons for the army. He was rich. He was an industrialist. But he was good-looking guy and he was courageous…I thought it would be fun to take the kind of character that nobody would like—that none of our readers would like—and shove him down their throats and make them like him.

Though no one should ever accuse the Iron Man movies of pulling for any particular political agenda, the first two films did preserve the comic books’ gleefully rightward lean. (After all, Favreau identified Elon Musk, the libertarian billionaire who co-founded the galactic transport company SpaceX, as the inspiration for the on-screen version of Tony Stark; Musk also had a cameo in Iron Man 2.)

In the first Iron Man, Stark’s bad-boy charisma is defined by his belief in a Peace-Through-Strength-on-steroids mindset:

Although he undergoes something of a personal and political makeover later in the film, the beginning of Iron Man 2 shows Stark in familiar form. When he’s called to a hearing on Capitol Hill, lawmakers pressure him to turn over his terrorism-fighting toys to the US government and military. In response, a defiant Stark denies the government his property, cockily mocks the panel of lawmakers, and brags that he “successfully privatized world peace.” This is met with wild cheers from the gallery.

There are no politics to Iron Man 3, beyond the political assertion that lethal and indiscriminate terrorism is bad. Director Shane Black, who co-wrote the screenplay, is far more concerned with the slam-bang fight scenes and the romance between Stark and his live-in girlfriend Virginia “Pepper” Potts (played by Gwyneth Paltrow). So much of the film focuses on Stark, once the consummate care-free playboy, settling down with the love of his life. It’s a genuinely interesting and tender part of the story—and the best and most convincing romance in the modern comic-books-as-film cannon. Their relationship demonstrates just how softened and vulnerable (touchingly so) Tony Stark can get.

With his single life, goes his ideology.

Check out the trailer for Iron Man 3:

Iron Man 3 gets a wide US release on Friday, May 3. The film is rated PG-13 for sequences of intense sci-fi action and violence throughout, and brief suggestive content. Click here for local showtimes and tickets.