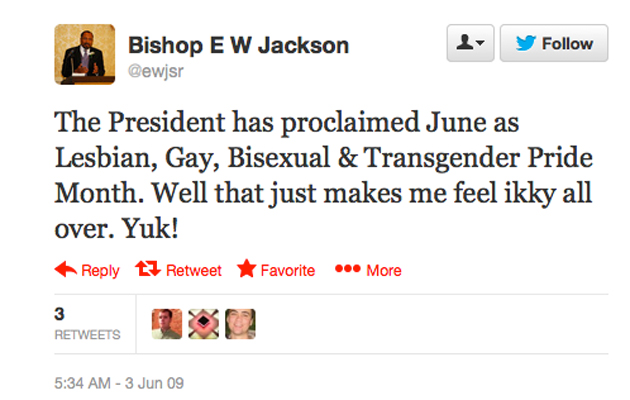 That’s an actual tweet from the Rev. E.W. Jackson, the Republican nominee for lieutenant governor of Virginia.

Jackson, a social-conservative activist with no record of electoral success, was nominated on the first ballot at the state GOP’s convention on Saturday and almost immediately triggered an acute case of heartburn among the party’s establishment due to his far-right views on gay rights and abortion. (Among other things, he favors the reinstatement of Don’t Ask, Don’t Tell, and said the Democratic party’s platform was in line with the Antichrist.) Jackson is, as Daily Kos Elections‘ David Nir puts it, “an oppo researcher’s mescaline-fueled fantasy bender riding on pegasus-back.”

And we’re only starting to scratch the surface. A quick survey of Jackson’s now dormant Twitter feed, @ewjsr (he now tweets at @Jackson4VA) shows that he is been remarkably consistent in his attacks on the gays, Muslims, and communists he believes are destroying the country from within.

“The ‘homosexual religion’ is the most virulent anti-Christian bigotry & hatred I’ve ever seen,” he tweeted in October of 2009. “They have threatened me, but not vice versa.” 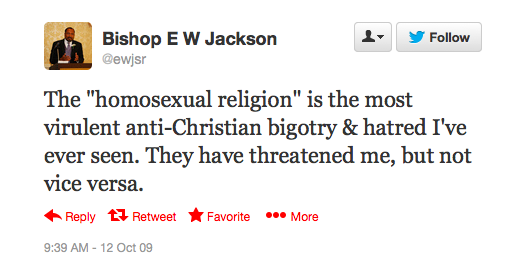 That was around the same time he concluded that “[t]he homosexual movement is a cancer attacking vital organs of faith, family & military – repositories of traditional values.” After President Obama addressed the Human Rights Campaign, an LGBT rights group, Jackson groveled that the organization wanted to “homosexualize the country.” After Family Research Council president Tony Perkins was disinvited from an event at Andrews Air Force Base, Jackson called the Obama administration “the Gestapo.” When Rush Limbaugh invited Elton John to perform at his wedding, Jackson called it “utterly disappointing.” He referred to Democrats as “Demoncrats.”

Elsewhere, Jackson describes President Obama as the “first homosexual President,” and endorses an argument by Frank Gaffney that Obama is also the “First Muslim President.” 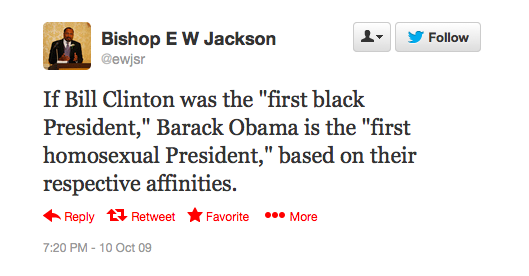 Jackson, a Harvard Law School graduate and former student at Harvard Divinity School, recognized the contradiction in these statements, and openly struggled with it: “It will be interesting to see how Obama reconciles Islamicizing America with homosexualizing America,” he tweeted. “Babylon v Sodom & Gomorrah.” (The Baylonians weren’t Muslim, but that’s hardly the point.) Jackson considered it “tragic” that American foreign policy was, in his view, now “pro-Islam.”

He was also bothered by the presence of practicing Muslims in the administration: 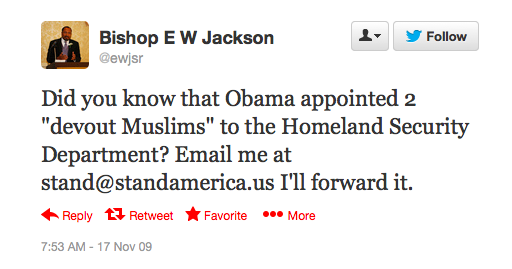 Jackson’s fear of Muslims was such that after an Air France flight crashed into the Atlantic Ocean and a gunman opened fire at the Holocaust Museum in Washington, DC, in 2009, he immediately alleged—citing absolutely nothing—that both events had been acts of Islamic terrorism. (The Holocaust Museum gunman was a white supremacist, and the Air France crash was ruled an accident). Responding to a report that Obama was hoping to use his space agency as a way of reaching out to to the Muslim world, he was indignant: “Obama’s new mission for Nasa, not to explore space, but expand Islam! Huh?”

Given the last few days, this last tweet seems somewhat fitting. It’s from 2010, and it’s a stirring defense of another conservative activist whose unlikely nomination cost Republicans a once winnable race: