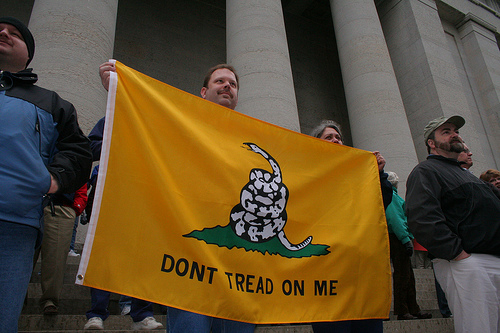 On Monday morning, we published a story looking at what I called Ohio Gov. John Kasich’s “remarkable renaissance.” Two years ago, Kasich was Ohio’s bête noire, one of the most unpopular governors in America. Today, his approval rating has rebounded to around 50 percent, his disapproval rating is in the low-30s, and he’s faring better than his fellow governors in the Republican class of 2010.

All that being said, Kasich is still in a fragile place. A Monday story in the Columbus Dispatch says that Ohio tea partiers are so fed up with Kasich and the Republicans in the legislature that they’re thinking about breaking away from the GOP and possibly forming a third party in time for the 2014 elections. Seth Morgan, policy director for the Ohio chapter of the Koch-backed Americans for Prosperity group, told the Dispatch that tea partiers’ options range from “a third party, to an insurrection (within the Republican Party) and everything in between.”

The Ohio tea party hit its boiling point when Tom Zawistowski, executive director of the Portage County Tea Party, got trounced in his bid for the chairman’s seat of the Ohio Republican Party. Zawistowski lost to Matt Borges, the party establishment’s pick, by a 48-7 vote. After losing this proxy battle to lead the Ohio GOP, conservative leaders apparently decided they needed to break off and consider alternatives to the party.

Here’s from the Dispatch:

After the chairmanship vote, Zawistowski said he made it clear that if the state GOP did not focus on enacting conservative policies, “we would either find a political party to join or we would start one of our own,” saying his meeting with Shrader “is the first step in that process.”

It remains uncertain, however, just how much the Ohio GOP and its candidates could be hurt by an insurrection because it is difficult to assess the true strength of tea party groups. A 2012 poll by the Washington Post and the Kaiser Family Foundation found that about 28 percent of Republicans identified themselves as tea party supporters.

Although loosely organized in 2009 around ideals of fiscal conservatism and smaller government, the tea party largely has been fractionalized with no single acknowledged leader.

“There are potential splits within the tea party itself,” said John Green, a University of Akron political scientist. “It’s hard to judge how strong they are because their popularity fluctuates. It’s not a cohesive group, but it does have some resources and some talented people who are quite effective.”

If the tea party “insurrection” turns out to be real, it is bad news for Kasich. A third party or GOP insurrection could divide the conservative base that Kasich needs to get reelected in 2014. He defeated Democrat Ted Strickland by just two percentage points in 2010—and that was when the tea party was at full strength. Today, as the Dispatch story makes clear, Kasich’s relationship with hard-line conservatives is fragile, with tea partiers furious over his proposal to expand Medicaid using Obamacare dollars.

Whether conservatives can mount a serious third-party challenge in 2014 remains to be seen. But if they do, it’s last thing Kasich needs.