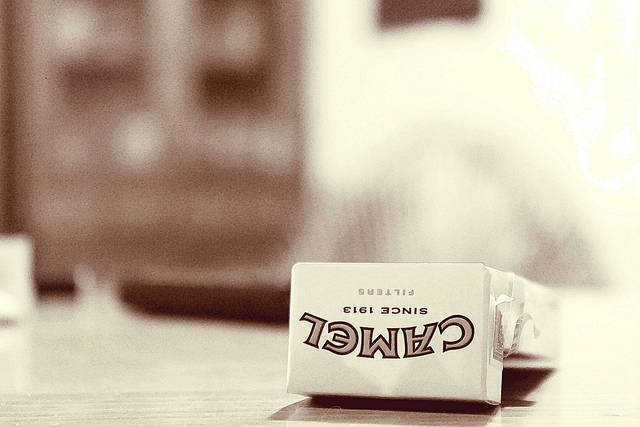 When we use the term “dark money,” we’re usually referring to politically active nonprofit groups—like the kind at the center of the recent IRS scandal—that spend millions on political campaigns yet don’t disclose their funders. Think Karl Rove’s Crossroads GPS, Koch-backed Americans for Prosperity, and pro-Democrat Patriot Majority. Rarely, if ever, does the public learn who bankrolls these organizations.

This week, though, we got one such glimpse. As the Center for Public Integrity reported, Reynolds American Inc., the corporation behind Camel and Winston cigarettes, funded several high-profile dark money groups in 2012. Reynolds doled out $175,000 to Americans for Tax Reform, conservative activist Grover Norquist’s anti-tax group. The company also gave $50,000 to Americans for Prosperity, $45,000 to the US Chamber of Commerce, and $100,000 to the Partnership for Ohio’s Future, an Ohio Chamber-backed group that supported restricting the worker bargaining rights.

The tobacco company’s donations are just a fraction of the nearly $50 million that those two groups reported spending on political advocacy ads during the 2012 election cycle, almost exclusively on negative advertising. Federal records show that Americans for Prosperity alone sponsored more than $33 million in attack ads that directly targeted President Barack Obama.

But the money, which Reynolds American says it disclosed in a corporate governance document at the behest of an unnamed shareholder, provides rare insight into how some of the most powerful politically active 501(c)(4) “social welfare” nonprofits are bankrolled.

“The shareholder specifically requested that we disclose information about 501(c)(4)s, and in the interests of greater transparency, we agreed,” Reynolds American spokeswoman Jane Seccombe said.

Large corporations—tobacco companies or otherwise—almost never release information about their giving to such groups, and it’s most unusual for the groups themselves to voluntarily disclose who donates to them.

After the Supreme Court’s 2010 Citizens United decision, which freed corporations to pump vastly more money into American campaigns, businesses faced two options. They could donate to super-PACs, which can raise and spend unlimited sums of money but must disclose their donors. Or they could fund politically active nonprofits, which can dabble in politics but don’t name their donors. In the wake of Citizens United, we heard countless warnings about a “flood” of corporate cash into politics through big-spending super-PACs. But that flood never quite materialized: For-profit corporations accounted for just over $1 of every $10 raised by super-PACs in the 2012 election cycle. Instead, it was a small band of millionaires and billionaires that gave super-PACs most of their dough.

What the relatively small Reynolds American Inc. donations suggest is that corporations chose the nonprofit route and so avoided scrutiny of their political giving in today’s big-money era. In this case, Reynolds’ donations were disclosed only because a pesky shareholder asked for them to be. That’s not the case for most corporations, whose giving remains a secret.