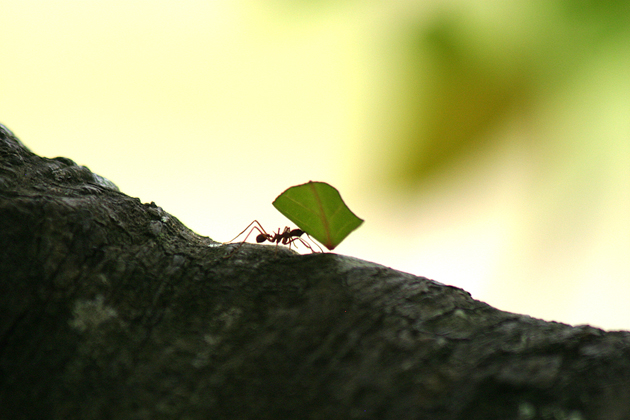 “If you have ants in your house,” the great Harvard ecologist EO Wilson once said, “be kind to them.” Keep this in mind the next time you want to flick one off the kitchen table: The tiny critters, which collectively weigh about as much as all of humanity, could wield a big weapon in the fight against climate change.

In the United States, corn-based ethanol is a big business, consuming 40 percent of the domestic corn crop and providing roughly 10 percent of the fuel supply, which would otherwise be dirty fossil fuels. But the practice of topping your tank off with corn is fraught with problems: Some argue that the crop should be used for food; it’s sensitive to drought; and the ethanol-making process might be contributing to an E. coli epidemic, to name a few. That’s why the Obama administration recently announced a plan to invest $2 billion in organic fuels that rely on things other than corn, including switchgrass and gas from cattle poo.

But this weekend, a group of scientists discovered a chemical key that could revitalize corn-based ethanol by allowing it to be made from stalks, leaves, and other bits beside the cob itself. This won’t help much with the drought problem (less corn is still less corn), but it could alleviate the food vs. fuel debate and the E. coli problem when more kernels are saved to go straight to livestock. Turns out, the savior of ethanol could be the South American leafcutter ant.

Leafcutter ants make some of the largest underground colonies in the world, some with as many as 7 million residents. And, as the name suggests, many of them spend their days combing the rainforest for bits of leaves, gathering half the weight of a cow per colony every year. They carry this mass back into their tunnels and use it as fertilizer for a crop of fungus, which they then eat. Ant experts (“myrmecologists,” if you care to know) have long believed that the fungus acts as a kind of external stomach for the ants, breaking down sugars in the leaves that the ants aren’t equipped to handle themselves. In fact, it’s not the fungus itself that breaks down the leaves, but chemical enzymes within it, and Frank Aylward, a microbiologist at the University of Wisconsin-Madison, says those same enzymes could be used to help break down corn byproducts to make fuel.

In a new study, Aylward sequenced the genome of the leafcutter ant’s symbiotic fungus, and identified for the first time the exact enzymes that have evolved over millennia to efficiently break down plant material stored in the ant’s underground tunnels.

For making fuel, Aylward asks, “why don’t we use the rest of the corn plant? It’s because the sugars are tied up in cellulose and other things that are hard to break down. So we’re looking for enzymes that can help.” Enzymes are already used for this purpose, and a crop of businesses have sprung up in the biofuel boom to manufacture them, but Aylward believes his could be among the most efficient ever discovered. And using every part of the corn plant, including parts that typically go to waste, could make ethanol production more sustainable and boost its climate benefits.

To study the ants, Aylward and his team traveled to Panama and Costa Rica to collect specimens (“The trick is to get the queen,” he says), then brought them to a lab in Wisconsin where they could take samples of the fungus as the ants cultivated it. While there are many microbes that can break down tough plant matter, he says, the ants do it exceptionally well: Collectively, they’re the largest herbivore on the continent.

“We wanted to see if there was something that allowed them to do that so efficiently,” he said.

Aylward’s findings pinpoint that secret ingredient enzyme, and he says he’s already been contacted by private businesses looking to manufacture the enzymes and get an early start on applying them to biofuel production; they could even be mixed and matched with other enzymes to take the ants work even further.

“The ants are really successful at this,” he said, “and that’s the exact thing we want to do with plant biomass.”