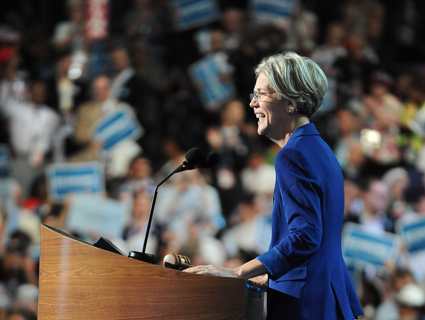 On Monday night, Sen. Elizabeth Warren will hold an “emergency briefing” on student debt with the progressive policy group MoveOn.org. The senator will take calls from students, parents, and graduates struggling with student loan debt to discuss “the student loan fight, [and] understand some potential solutions,” MoveOn said in an email blast Monday.

Since 2004, student loan debt has tripled, and now stands close to $1 trillion. On July 1, rates for Stafford loans are set to double from 3.4 percent to 6.8 percent. The deadline has lawmakers scrambling for a fix. There are a bunch of proposals out there, including Warren’s call for students to be allowed to pay the low, low rate that big banks pay the Federal Reserve for their short-term borrowing; a plan President Barack Obama laid out in his budget in April; and the GOP plan that just passed the House, which Warren and Obama hate.

The GOP bill would allow interest rates on student loans to rise or fall from year to year with the government’s cost of borrowing, ending the current system under which rates are fixed by law. Because market rates are low right now, the initial rate for the loans envisioned by the Republican bill  would be about 4.4 percent, but the legislation would allow them to rise to as much as 8.5 percent. Warren says the plan would turn students into “a profit center.”

Under Obama’s plan, the interest rate at which student loans are issued would vary depending on the economy, but once the student has borrowed the money, the interest rate would be fixed for the life of the loan, allowing students to plan for consistent payments. Obama’s plan would also aid low-income borrowers by letting them cap their monthly loan payments to 10 percent of their income after graduation.

Warren’s proposal, the Bank on Students Loan Fairness Act, would act as a one-year patch, cutting student loan rates to the same low .75 percent interest rate that banks pay to the Fed for short-term loans. After a year, a longer-term student loan solution would be drawn up. (Here is a round-up of all the plans, plus some nice charts.) Warren’s bill has drawn praise from students and advocates around the country. MoveOn said in an email blast that more than 434,000 of their members have voiced support for the legislation.

But MoveOn wants more students, graduates, and parents to get involved in influencing the outcome of legislation that will determine how much money they spend on education debt over a lifetime. The Monday briefing is part of that effort. “We can win this fight and show that Congress needs to respond to an agenda that works for us,” MoveOn said in a statement, “But only if we organize together in our communities, on college campuses, and everywhere our representatives can see us.”