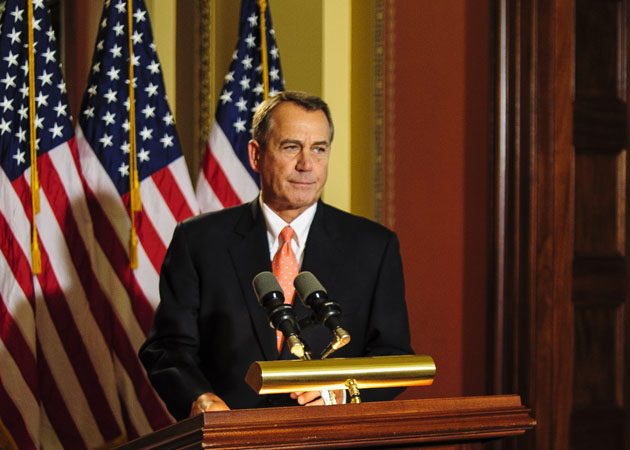 On Thursday afternoon, after two weeks of floor debate, the Senate passed its comprehensive immigration reform bill by a decisive vote of 68 to 32—just shy of the 70 votes that the Gang of Eight had hoped to reach in order to apply maximum pressure on the House to take up this legislation (take a look at the vote breakdown here). But it was never clear that the GOP-controlled House would ever consider voting on a Senate-approved immigration bill, not even if it drew unanimous support in the upper body. Though the Senate bill—which pairs a pathway to citizenship for undocumented immigrants with a $40 billion border surge that’s been denounced as wasteful and excessive—is an ugly compromise, its passage did demonstrate a deeply divided Senate can work. But can the House function?

Bipartisan talks regarding immigration reform have repeatedly stalled in the lower chamber, and House Speaker John Boehner (R-Ohio) has found himself in a tight spot, forced to choose between alienating millions of Latino voters—a key constituency the Republican Party is trying to court—and appeasing tea party lawmakers who oppose a pathway to citizenship. The coming weeks, before Congress recesses for the month of August, will be a make-or-break moment for the House GOP.

The Senate bill would offer a 13-year path to citizenship, beginning with the opportunity for most undocumented immigrants to shift to provisional legal status. After the implementation of aggressive security measures that would throw tens of millions of dollars at the US-Mexico border, newly legalized immigrants could begin a 10-year wait to become eligible for green cards granting them permanent residency. Three years later, they could apply for citizenship. Many House Republicans want to see border security and other law enforcement measures in place before undocumented immigrants are eligible even for provisional legal status, and Boehner has repeatedly said that he will not bring the immigration legislation to the floor that doesn’t have the support of a majority of House Republicans.

“I think the House will be less about policy, quite frankly, and more about the political choice that the GOP has,” says Frank Sharry, executive director of the pro-reform group America’s Voice, which supports the Senate bill. “[Are Republicans] going to remain in the grip of the nativists, or are they going to actually try to modernize the party and reach out to Latinos and other minorities?”

Earlier this week, Rep. Paul Ryan (R-Wis.), who supports comprehensive reform, said the Senate bill’s additional border security measures made it “closer to the House’s position” and passage there “more likely.” Others aren’t convinced. Rep. Bob Cole (R-Okla.) told Bloomberg News that the bill is “dead on arrival” in the House. “Why in the world would a majority of Republicans embrace something in the House that a majority of Republicans in the Senate didn’t embrace?” he asked. Boehner has said that he wants the House to vote on immigration before it recesses, though this may amount to a series of bills, not a comprehensive plan.

The Republican National Committee’s 2012 election post-mortem explicitly called on GOPers to improve minority outreach and implored the party to “embrace and champion comprehensive immigration reform.” It seems the House Judiciary Committee, chaired by Rep. Bob Goodlatte (R-Va.), didn’t get the memo. It has started advancing piecemeal immigration bills that deal only with enforcement and border security. The bills include the Strengthen and Fortify Enforcement (SAFE) Act, an attempt to sidestep last year’s Supreme Court ruling that struck down parts of Arizona’s harsh immigration law by making it a federal crime to be in the United States illegally and allowing states to enforce federal immigration laws. “If they bring that to the floor, no Democrat’s going to vote for that,” Sharry says.

Already, some immigration advocates have dropped their support for reform because of the Senate bill’s border securiy measures. Presente.org, a major Latino advocacy group, released a statement saying it could not “in good conscience” support a bill that is “guaranteed to increase death and destruction through increased militarization of the border.” But many immigration groups are still backing reform, with reservations. Sharry contends that the bill’s citizenship measures are far better than what the Senate proposed (and failed to pass) in 2007. Now, he says, immigration reform advocates have “turned the corner” in the debate.

Ultimately, immigration reform may be an all-or-nothing prospect. “The only thing that’s going to pass is reform with a path to citizenship,” Sharry says. “Yes, it’s going to have enforcement, but if the House thinks it can dictate terms on enforcement, I think it will blow up the deal.”