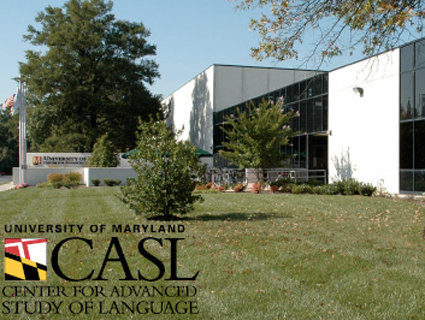 The Center for Advanced Study of Language near the University of Maryland, College Park.<a href="http://www.casl.umd.edu/">UMD.edu</a>

Since the Guardian revealed Edward Snowden as the source behind its explosive scoops on National Security Agency surveillance, media outlets have been picking over the details of the whistleblower’s life, everything from his stint in community college to the identity of his abandoned girlfriend. Here’s another small detail about his background that intrigued some people: “[H]e got his first job in an NSA facility, working as a security guard for one of the agency’s covert facilities at the University of Maryland.” Some reporters were surprised to learn that the University of Maryland had a “covert” NSA facility operating somewhere on or near the school grounds. (The NSA itself is headquartered in nearby Fort Meade, Maryland.)

On Sunday, the Diamondback, the university’s student newspaper, noted: “Which facility and exactly where it was Snowden worked is unknown, but the NSA has connections to several university facilities, including the Laboratory for Physical Sciences, the Office of Technology Commercialization and the Lab for Telecommunication Science.” Later, the university confirmed that in 2005 Snowden worked for less than a year as a “security specialist” for the NSA-linked Center for Advanced Study of Language (CASL), which serves as a research center for the intelligence community.

The research done at CASL ranges from cultural and linguistic studies to work on “spycraft” technology (click here to read a rundown of the Center’s language research, published in the NSA’s quarterly online journal). One neuroscience project reportedly focused on filling in the blanks of incomplete texts, such as documents from corrupted hard drives or intercepted communications. “CASL’s cognitive neuroscience team has been studying the cognitive basis of working memory’s capacity for filling in incomplete areas of text,” a CASL document reads. “They have made significant headway in this research by using a powerful high-density electroencephalogram (EEG) machine acquired in 2006.” Another project involved training subjects to control their own brain-wave activity.

The university administration has touted its NSA partnership. “In support of the nation’s critical need for increased language capabilities, this Center will conduct groundbreaking research in areas such as language acquisition, contextual analysis of language, and human computer interaction and computer translation, and become the largest center for language study in the world,” C.D. Mote, Jr., former president of the university, announced in September 2003.

The relationship between the agency and the school, which goes well beyond the Center for Advanced Study of Language, has been well-documented. For instance, a 1997 issue of Connections, the university’s electrical and computer engineering magazine, included a feature on the “National Security Agency’s Laboratory for Physical Sciences and Maryland,” which is described as a “partnership that pushes the limits of technology.” (The laboratory is located adjacent to the College Park campus.) Here’s an excerpt from the item:

Although the current building is but five years old, the university’s association with LPS actually dates back to the 1950’s-shortly after President Harry Truman established the NSA… [T]he Scientific Advisory Board advised the NSA to enact an open partnership with a prestigious university and conduct collaborative, unclassified research across the fields of physical science that influence technological advances in communications and computers. As a result, the Laboratory for Physical Sciences was established, right next to the University of Maryland in College Park… After supporting 40 full years of uninterrupted collaboration, the NSA has steadfastly been pleased with the results.

The university would not comment on the nature of the work currently done at this laboratory.

As fascinating as this might be, there’s nothing scandalous or particularly unusual about the NSA’s partnering with the University of Maryland. The NSA has, as do other American intelligence agencies, including the CIA, a long history of collaborating with universities across the country. “Because of the nature of what the agency does, and their necessity to be on the cutting edge of computer science, it [is] required for them to have pretty close ties to academics and computer research centers,” says John Prados, a senior research fellow at the National Security Archive at George Washington University. The NSA maintains a roster of recommended “centers of academic excellence” (meaning they have commendable programs in teaching information assurance), which, in addition to the University of Maryland, includes Anne Arundel Community College—where Snowden sporadically took classes before taking a job at the university’s NSA facility.