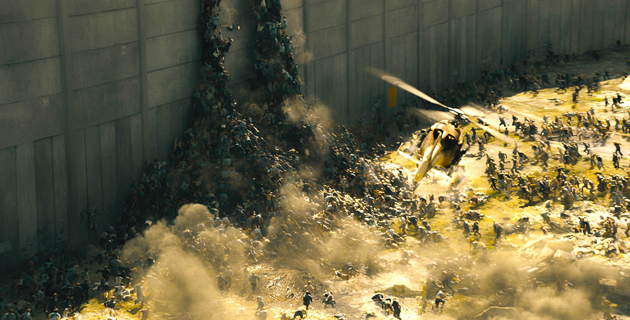 World War Z, also known as Run, Brad Pitt, Run, is a thoughtful and hugely exciting culmination of producer Brad Pitt’s campaign to create his very own Bourne-type action franchise starring zombies and Brad Pitt. The film, directed by Marc Forster and based on Max Brooks’ beloved 2006 oral history (a novel in which Howard Dean and Colin Powell analogs are the leaders of the post-apocalyptic free world), is set at the dawn of a worldwide zombie takeover. The president of the United States is dead, major cities fall within hours, and a single bite from one of those ravenous creatures can turn you into one in a little more than 10 seconds. At the behest of surviving politicians and military commanders, retired UN inspector Gerry Lane (played by Pitt) bolts around the globe in search of a cure for the rapidly spreading zombie virus.

Beyond that I enjoyed World War Z‘s big-screen adaptation (I will leave the griping about the movie being a faithless adaptation of the novel to others), there are a few factors that stood out to me. First of all, World War Z: The Brad Pitt Saga is by far the best free advertising the United Nations has gotten in years: A courageous, loving, sex-appeal-gushing family man/UN employee—who has seen action in Liberia and Bosnia—is quite possibly humanity’s only hope for survival.

But the aspect of the film I found most interesting is that World War Z completely resolves the Israeli-Palestinian conflict.

When UN inspector Lane travels to Jerusalem, he finds a city enclosed by a massive, Israeli-made circular wall (pictured above). The sky-high wall is patrolled by the IDF and protects the holy city’s bustling populace from zombie insurrection (this zombie outbreak is distinct from the one at the Mount of Olives foretold in Orthodox Judaism). As Lane explores a public square of prayer and recreation, he witnesses a scene of ecumenical kumbaya and real human peace. Palestinian flags are waved next to Israeli flags. Muslim prayer sessions are conducted alongside Jewish ones. Israeli and Palestinian children frolic in tandem. Huddled gatherings chant and cheer, without any thought to ethnicity, or political, religious, or ideological affiliation.

So there you have it: The worldwide zombie pandemic does for the Middle East what Barak and Arafat simply could not. Think of it as a one-city solution.

We’ve seen and read stories like this before. In 1996’s Independence Day, a sudden and violent alien invasion unites all countries in a fight for survival. For instance, Western powers and Saddam Hussein‘s Iraq are shown fostering friendly, brothers-in-arms-style relations (not that there isn’t precedent for that, however). In the graphic novel and film Watchmen, nuclear war is averted because mankind decides to band together to deal with bigger problems.

In those films, mankind wins the day and nuclear holocaust is averted, respectively. In World War Z, the peace in the Middle East is ultimately ruined when the zombie forces make a writhing pile of zombie terribleness, scale the gigantic wall without the IDF noticing, and commence biting the inhabitants and frightening Brad Pitt.

If you would like to infer any bizarre or cynical political allegory in any of that, please be my guest.

On that note, check out this trailer: