Ever since The Smurfs—the Belgian TV and cartoon franchise—kicked off in 1958, the little blue creatures have gained an enviable international presence. The Smurfs have been on money. They’ve been featured in a UNICEF ad campaign in which the peaceful Smurf village is indiscriminately carpet bombed. And in summer 2011, the big-screen Smurfs adaptation, starring Neil Patrick Harris and Sofía Vergara, was a box-office hit; the Smurfs even got to ring the opening bell at the New York Stock Exchange.

And with The Smurfs 2 hitting theaters this week, it’s a good time to revisit another important piece of the Smurf legacy: The lovable blue-skinned animals might also be rabid totalitarians and raging anti-Semites.

Before I get into the Untold History of The Smurfs, I’d like to make clear that The Smurfs 2 does not veer into too much political territory. At one point, one of the main human characters (played by Brendan Gleeson) is transformed into a talking duck by a powerful wizard. The duck lies to startled and confused bystanders and blames the situation on global warming. He then yells at them, “Buy a Prius!” Furthermore, Gargamel (Hank Azaria), the mean-spirited sorcerer and primary antagonist in the Smurfs universe, is driven by his desire for world domination and by his plot to throw Smurfs into his magic-harvesting concentration camps. (He’s Hitler with a magic wand.)

And that’s about as political as the new movie gets. But according to certain smurfologists, the franchise as a whole is riddled with bleak and disturbing politics—mainly, collectivist and racialist messages. This isn’t something dreamed up by Pamela Geller; these are actual academic and intellectual theories. For instance, Antoine Buéno, a lecturer at Sciences Po university in Paris, wrote a much lambasted book, published in 2011, about whether the Smurfs are anti-Semitic Stalinists. At this point, you’re probably rolling your eyes and thinking that some French sociologist was overthinking it. The Smurfs are so cute! How could they possibly be a family-friendly metaphor for Molotov–Ribbentrop? Well, here are a few of the bulletpoints that Buéno’s book offers, via the Guardian: 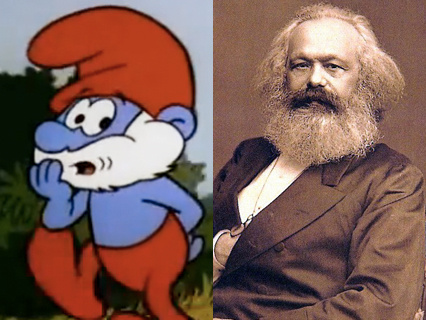 (Pop singer Katy Perry, who voices Smurfette in the two films, did not respond to a request for comment on portraying the Aryan Smurf lady.)

Two years ago—right around the theatrical release of The Smurfs—the Smurf-equals-Soviet arguments were rehashed by certain corners of conservative media. The Washington Times ran a piece titled, “Sure, they look blue, but are the Smurfs closet Reds?” which was picked up by Fox Nation, The Drudge Report, and National Review. The Washington Times article included this “quiz”:

So you, as a consumer of popular culture, can look at all of this and shudder at the revelation of anti-Semitic, commie Smurfs. Or you could simply chuckle at the notion, buy a ticket to the new Smurfs movie (although I’d strongly urge against it, on completely non-ideological grounds), and leave your childhood un-ruined.

On that note, here’s a short, tongue-in-cheek documentary on the allegedly totalitarian, far-left Smurfs:

The Smurfs 2 gets a wide release on Wednesday, July 31. The film is rated PG for unforgivable Smurfing. Click here for local showtimes and tickets.