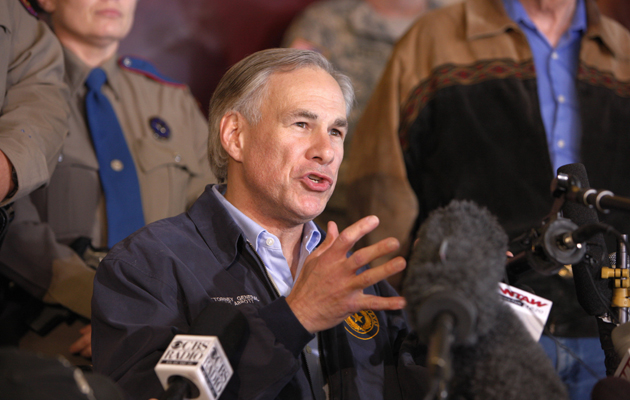 During his tenure as Texas attorney general, Greg Abbott has developed a bit of a routine: “I go into the office,” he told a GOP audience in San Angelo in Februrary, “I sue Barack Obama, and then I go home.” It’s a line he uses in virtually every speech he gives and it has the benefit of being basically true. Abbott has sued the Obama administration 27 times in five years. Now he might be getting a promotion.

After Gov. Rick Perry’s announcement on Monday that he will not seek reelection for a fourth time in 2014—while leaving the door open, improbably, for another presidential run—Abbott, who is expected to announce a gubernatorial bid as early as Sunday, is now the favorite to be the chief executive of the nation’s second-biggest state. (A recent survey by Public Policy Polling gave him a 8-point advantage over the Democrats’ top prospective recruit, state Sen. Wendy Davis.) More than a few people will hail the departure of Perry, a politician who embraced crony capitalism, supported criminalizing sodomy, crushed abortion rights, and almost certainly allowed an innocent man die. That’s about right. But in the hyperlitigious Abbott, Texas Republicans have a replacement who may just do the impossible—make progressives miss Rick Perry.

That’s because for most of the last decade, the actions that have done the most to harden Perry’s anti-Washington reputation have really been the work of Abbott. While lacking the coyote-sniping public swagger of the current officeholder, Abbott, whose office is independent of the governor, has been leading the state’s legal challenge to virtually every notable piece of legislation that’s come out of Washington in the Obama era.

Abbott has sued the Environmental Protection Agency 17 times over air quality standards and greenhouse gas emissions. (He believes carbon dioxide can’t be a pollutant because it is emitted by humans, and after experiencing freezing temperatures in Midland, he once tweeted, “Whatever happened to global warming?” It was January.)

He challenged the Department of Health and Human Services four times: over funding that was attached to abortion reimbursements, for mandating that all employers provide access to contraception, over the Affordable Care Act, and for the taxation scheme in the 2003 Medicare expansion.

He twice sued US Attorney General Eric Holder over the Department of Justice’s rejection of the state’s voter ID law and redistricting plans. (After the Supreme Court struck down Section 4 of the Voting Rights Act, Abbott announced that Texas’ voter ID law would go into effect immediately.)

He sued the Department of Education over a delay in the disbursement of $830 million in federal education funds.

He sued the Department of the Interior three times: over the Obama administration’s moratorium on offshore drilling after the Deepwater Horizon spill, the creation of a new national wildlife refuge on the Upper Neches River, and a proposed casino on the Kickapoo Indian reservation. He took the Federal Energy Regulatory Commission to court over reporting requirements for pipeline companies.

Even the National Marine Fisheries Service entered Abbott’s crosshairs this spring, after the agency proposed “shortening the red snapper recreational fishing season in federal waters in the Gulf of Mexico off the states’ coasts.” Give a man a fish and he’ll eat for a day; take away his fish and hell hath no fury.

Abbott’s opposition to any form of federal control is so fierce he even went to court to argue that Texas cities should not be compelled to provide wheelchair access because he believed the Americans With Disabilities Act was unconstitutional—despite the fact that Abbott himself has been paralyzed from the waist down since 1984, when he was struck by a falling tree.

But Abbott’s biggest legacy in Washington may be the Republican who has done the most to shake it up in Obama’s second term—Sen. Ted Cruz, whose political career Abbott helped launch a decade ago when he hired Cruz to be the state’s first solicitor general. Cruz won election to the Senate last fall largely on the strength of his anti-Washington record as a solicitor general. But his cases were really Abbott’s cases, a fact Cruz’s opponents sought to use against him during the campaign.

Abbott’s anti-Washington record has been good for his profile, but it hasn’t done much for Texas. He has won just 4 of those 27 cases outright (in a handful of other cases he dropped the suit after the circumstances changed), and the Associated Press calculated that his losing battles had cost the state $2.8 million. Which brings us to the great irony of his career. When Abbott left the Texas Supreme Court to run for attorney general in 2002, Abbott’s main critique of his opponent, then-Austin mayor and former trial lawyer Kirk Watson, was a familiar one. You guessed it—frivolous lawsuits.