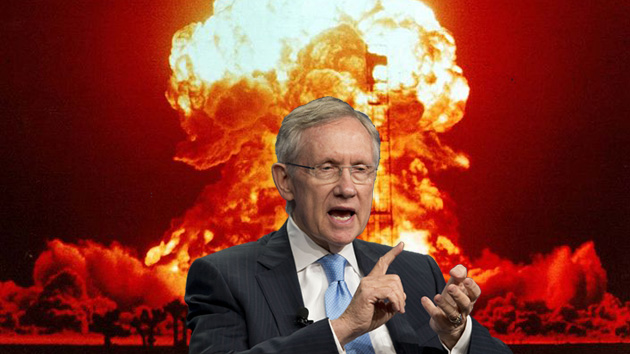 The US Senate doesn’t appear to be going “nuclear,” after all.

On Tuesday morning, senators were close to a deal, brokered in part by Republican John McCain of Arizona, to prevent Majority Leader Harry Reid from changing the rules of the Senate with a simple majority vote—a tactic called the nuclear option. For years, Reid has been frustrated by Senate Republicans, who have used filibusters to block votes on 16 of President Barack Obama’s nominees for executive-branch positions. (Only 20 executive-branch nominees were filibustered under all previous presidents combined.) Unless Republicans allowed votes on Tuesday on a handful of key nominees, Reid threatened to use the nuclear option to change Senate rules so that nominees could be approved with just 51 votes instead a filibuster-proof 60.

But it looks like there will be no nuclear option. Instead, Senate Republicans say they’ll drop their opposition and allow votes on five nominees, including Richard Cordray to the Consumer Financial Protection Bureau (CFPB), Tom Perez to the Department of Labor, Gina McCarthy to the Environmental Protection Agency, Fred Hochberg to the Export-Import Bank, and current National Labor Relations Board chairman Mark Gaston Pearce. In exchange, Obama will toss out two other NLRB nominees, Richard Griffin and Sharon Block, and replace them with two new people. Labor unions will reportedly get a say on who Obama nominates.

On the status of deal, Reid said at noon on Tuesday: “We have a few little Is to dot and Ts to cross. Everything’s doing well.”

The Senate’s compromise comes after days of brinkmanship, nasty rhetoric, and intense talks between Democrats and Republicans. On Monday night, all 100 members of the Senate met in the Old Senate Chamber to hash out some sort of deal to avoid using the nuclear option. No specific deal was reached then, but those talks appeared to have laid the groundwork for Tuesday’s compromise. “I hope that everyone learned the lesson last night: that it sure helps to sit down and talk to each other,” Reid said on Tuesday.

This is not the first time senators have threatened to go nuclear. In 2005, a group of 14 senators cut a deal to vote on several of President George W. Bush’s judicial nominees after the GOP leadership threatened to use the nuclear option.

In an appearance at the left-leaning Center for American Progress think tank Monday, Reid chalked up the GOP obstruction to wanting to gum up the government while also undercutting agencies like the NLRB and the Consumer Financial Protection Bureau. “We have a situation where Republicans have created gridlock, gridlock, gridlock,” he said. “And it has consequences. It’s not only bad for President Obama; it’s bad for the country. The status quo won’t work.”

With a compromise in the works, the Senate moved ahead to vote on the Obama administration’s nominees. The Senate voted 71 to 29 to allow a full vote to confirm Richard Cordray, whom Obama nominated to run the Consumer Financial Protection Bureau during a recess period two years ago. That’s a good sign that Cordray’s nomination will be approved. It’s also a tough vote for Senate Republicans, 43 of whom pledged to block any nomination—including Cordray’s—to run the CFPB because they oppose how the CPFB functions.

So where does this leave the Senate? Reid may have backed down from using the nuclear option this time, but there’s nothing stopping him from threatening to use it again. And if—really, when—Republicans retake control of the Senate, they can threaten to use it, too. As Ezra Klein at the Washington Post explains, “This will be the new normal.”