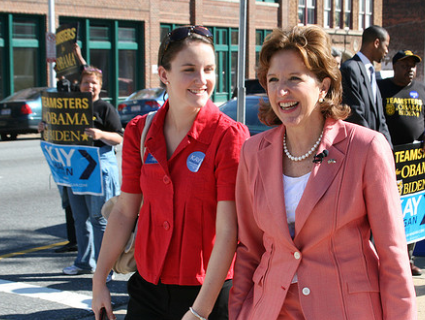 The problems facing North Carolina Sen. Kay Hagan next fall are pretty straightforward. She is a Democratic incumbent in a state where Republicans control both houses of the legislature and the governor’s mansion and Mitt Romney won by 100,000 votes last November. She is a top target of Senate Republicans and conservative super-PACs, and when she comes up for re-election next fall she will have to contend with a midterm electorate that’s more conservative than the one that elected her—partly because the midterm electorate is whiter and older, and partly because of soon-to-be enacted laws restricting voting rights.

That’s not an ideal electoral climate, but all things considered, it could be worse—North Carolina Republicans could settle on an opponent. Fifteen months before the 2014 election, GOPers in the state are faced with a dilemma. Their only declared candidate has serious baggage—the now-infamous “Motorcycle Abortion Bill,” which snuck a set of strict abortion restrictions onto an unrelated provision on motorcycle helmets. The candidates who voters tell pollsters they prefer aren’t much better.

“The Republicans have handed Hagan some levers to assist her in [mobilizing] voters,” says Ferrel Guillory, the director of the University of North Carolina’s Forum on Public Life.

If the Republican primary were held today, the front-runner, according to virtually every poll since last December, would be Virginia Foxx, a five-term congresswoman who also has the distinction of being the worst person in Washington to share an elevator with. (Foxx once reported an intern to the Capitol police for accidentally riding on a members-only elevator; no charges were filed.) The real issue with Foxx, though—and perhaps part of her appeal—is that she’s something of a loose cannon. In 2009, she warned that the Affordable Care Act posed a greater threat to Americans than terrorism, because it would result in senior citizens being “put to death by their government.” That was just a few months after Foxx claimed that the story that Matthew Shepard was murdered for being gay was a “hoax.” Foxx has given no indication that she’s actually considering a run, but she hasn’t said she’s not considering a run either.

Rep. Renee Ellmers, a former nurse who was elected in the tea party wave of 2010, has also consistently put off a decision on whether she’ll seek a promotion—first to the end of May, then to the end of June, then to mid-July. Now it’s just an open-ended proposition. Cryptically, Ellmers told National Journal in July that she was rethinking her decision on whether or not to enter the race, but didn’t indicate what her decision had been, assuming she’d ever even made one. Ellmers was first elected on the strength of an anti-Islam ad campaign that accused her opponent, former Democratic Rep. Bob Etheridge, of supporting the construction of a “victory mosque” in Lower Manhattan to celebrate the 9/11 attacks.

“I am not intending to say that all Muslims are terrorists,” Ellmers told CNN’s Anderson Cooper at the time. She just wasn’t ready to say they weren’t terrorists.

That leaves the GOP with one viable candidate who has actually declared, as of late July: Thom Tillis, the top Republican in the state House of Representatives. Tillis formally entered the race at the end of May, but since then his nascent campaign has been bogged down by problems of his own creation—namely, the sharp rightward lurch of the state legislature he helps run. Over the last three months, on Tillis’ watch, North Carolina has become ground zero in a push by conservative lawmakers and interest groups to cut down the social safety net, roll back reproductive rights, and limit access to the polls. At a time when Tillis would otherwise have been repositioning himself for the long electoral slog, he was instead pushing through a set of regulations designed to crack down on abortions.

The abortion bill in question, which passed the state house in July, was disguised as a motorcycle safety bill. The controversy came when the law became a Trojan horse for a slate of new abortion restrictions, such as a prohibition on abortion coverage in public employees’ health insurance plans and new regulations that could potentially lead to the closure of some abortion clinics.

The bill is deeply unpopular. For weeks, Tillis avoided commenting on the specifics of the legislation at all, but on Wednesday he explained his thinking to the Charlotte News & Observer. “It happens to be something that I support and I thought if I didn’t, they’d say, ‘Why didn’t you?’ so I thought would solve the question by making it very clear where I stood on the bill.” By supporting the law, Tillis stands in the minority—just 34 percent of voters say they approve of it, and Gov. Pat McCrory’s approval ratings have plummeted since the debate began. Hagan’s head-to-head advantage over Tillis has subsequently jumped from 5 points to 11.

The motorcycle abortion bill is less restrictive than the original version that passed the state Senate—by way of a repurposed bill to prohibit state courts from applying Islamic Shariah law. That effort, which was criticized by Republican Gov. Pat McCrory, would have required abortion clinics to meet the same requirements as ambulatory surgery centers. The kicker: state Senate president Phil Berger, who helped shepherd the bill through the chamber, is also considering challenging Hagan.

“I think the absolute worst thing the Republicans can do if they want to beat Kay Hagan is run a leader from the legislature,” says Tom Jensen, the director of Public Policy Polling (PPP). “The legislature has always been unpopular, but it’s never been more unpopular than it is now.”

“The legislature has, shall we say, a negative reputation to most anybody except for the Republican base,” adds Steven Green, a political science professor at North Carolina State University. “When you want to win a statewide election, you have to reach beyond that base and somebody associated with the legislature is gonna have a hard time doing that.”

The motorcycle abortion flap wasn’t Tillis’ first misstep. At a 2011 constituent meeting he offered his version of a 47 percent speech, expressing his desire to “divide and conquer” people who are on public assistance. “We need…folks to look down at these people who choose to get into a condition that makes them dependent on the government and say at some point you’re on your own,” he said. “We may end up taking care of those babies, but we’re not going to take care of you.” At the same meeting, he flirted with the idea of drug-testing welfare recipients and denying benefits to anyone who tested positive.

Brook Hougesen, press secretary for the National Republican Senatorial Committee, dismissed the recent polls by noting that PPP’s CEO is a Hagan donor. “Voters will always choose substance over ugly attacks, results over waffling, and no amount of hate can change the fact that Kay Hagan has been the least relevant, least effective, and least productive Senator not only in Washington since her arrival, but in North Carolina’s recent history,” she said in an email. “The only worry for Republicans is that Kay Hagan decides to retire, because she’s been such an ineffective, waffling do-nothing in the Senate.”

But Jensen, who polls for Democratic candidates, says Hagan’s prospects are starting to resemble that of another colleague who was once thought to be an endangered species—the Democratic Senate majority leader, Nevada’s Harry Reid, who was able to salvage a reelection victory when conservative activists nominated an anti-fluoride activist to challenge him.

“Kay Hagan does have approval ratings that suggest vulnerability, and when you have a situation like that it means her fate ends up tied to the political climate,” Jensen says. “But with the way the field is shaping up, you have the potential where it could still be a bad year for Democrats—and she’d still win.”