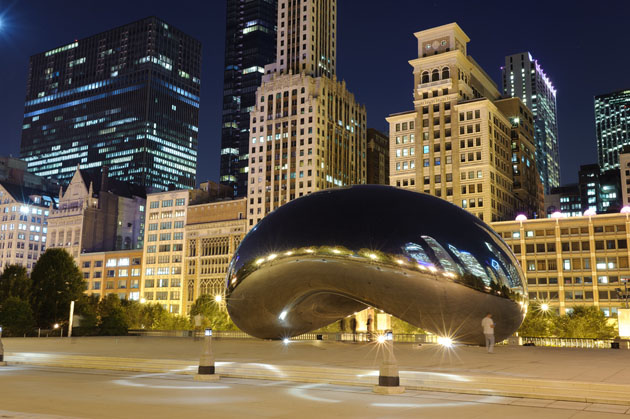 This story first appeared in National Journal and The Atlantic Cities and is reproduced here as part of the Climate Desk collaboration.

Richard M. Daley, who served six terms as mayor of Chicago from 1989 to 2011, was one of the first big-city mayors to focus on sustainable development. Some of his projects, such as the development of Millennium Park, flourished. Others are more likely to be remembered as flops—Chicago taxpayers may lose money on a solar-power deal Daley negotiated, and his administration spent millions of dollars on recycling initiatives that went nowhere.

Two years after leaving office, the longtime mayor is using his hard-won experience to head up a new company—launched by his investment firm, Tur Partners—that will help cities pursue money-saving infrastructure investments. Cities that agree to join The Sustainability Exchange, or TSE, will get a free analysis of their assets and potential projects, and will share information with other member cities. TSE will alert vendors when a city is planning a request for a proposal. And because the company is low-profit instead of nonprofit, when a city or region decides to go ahead with a project, TSE will take a cut of the savings the city realizes over time.

Five cities have already signed up to join the fledgling exchange, including South Bend, Indiana; Parma, Ohio; and New Orleans. National Journal‘s Sophie Quinton recently spoke with Daley and Lori Healey, his former chief of staff and now TSE vice chairwoman, about how their idea is taking shape.

Why is there a need for something like The Sustainability Exchange?

Daley: Everybody has problems with infrastructure. Whether it’s a port, rail, water, lighting, waste—this is part of the sustainability effort that we’re looking at. We’re looking at working with groups of cities to identify the project, raise the capital from the private sector as well as the public, and document the results.

Healey: Most cities are not New York or Chicago or Los Angeles. They don’t have either the technical or financial resources to plan out and implement these kinds of projects. The Sustainability Exchange creates a platform that allows cities to come together to access national expertise in these areas—at no cost to them—with the goal of executing a transaction in a much compressed time frame.

Is it fair to say that the exchange is focused on changes that will save municipalities money over the long term?

What’s going on here other than the collection and sharing of data about city assets?

Healey: We’ve started to bring together expert resources—including at Harvard and Arizona State University—to take that raw data and enhance it. So what you’re putting out to the private sector is so much better than a typical city RFP [request for proposal]: Here are my buildings, they have lights, tell me what I should do. It’s a much more specific RFP developed as a result of identification of needs.

Daley: I think a lot of cities are afraid to invest. You spend a huge amount on the project, and then four or five years later, there’s a whole new project out there that’s going to save more money.

Healey: Is it the best, most current of the technologies in the marketplace? We had one mayor recently tell us that he was on his third consultant for looking at a streetlight project—all private consultants for LED companies—and he had gotten three different recommendations.

What’s an example of a project that the exchange could make possible?

Healey: There are a couple of real-life examples. One is the purchase of LED street lighting. It would make sense for cities to work together within the same footprint of a utility company. That’s something that we help them with, to understand the regulatory environment. And then we bring cities together to take a look at separate transactions that, jointly, price like one.

Another example happened just recently. In a morning meeting in Newton, Massachusetts, the mayor says, “We’re interested in anaerobic digestion; we want to do something in our community to recycle food waste.” We had the same meeting 30 minutes later in another suburb. Why would you do two or three anaerobic digestion plants when it would make sense to do one, with a documented feedstock from three separate communities? It becomes much more financeable and efficient.

Daley: Nobody has really gone to the mayors and said, “Let’s all work together across a huge metropolitan area.”

Will requests for proposal be broadcast through The Sustainability Exchange? Or will cities handle the solicitation process on their own?

Healey: A combination of both. You have to incorporate and respect a city’s own requirements for procuring things. But you can also broaden the footprint for that solicitation. That’s the goal: to provide a bigger platform, on a national market, with independent expertise, to enhance their own capabilities.

Will cities be able to finance these projects on their own? Or will there need to be public-private partnerships?

Daley: It’s very hard for cities to self-finance. If it’s not a federal or state project, and you want to do it, you can receive a lot of private money.

Healey: There is significant private capital committed to sustainability. But right now the market doesn’t have scale enough for them to be very involved at the municipal level.

TSE is structured as a low-profit, limited-liability company, which allows it to accept investments from foundations and other private nonprofits. Why?

Healey: We wanted, first of all, to be able to assure cities that this isn’t just another business that’s looking to make money. It allows us to accept PRI [program-related investments] income from foundations around data enhancement and data enrichment. And because it’s low-profit, any percent savings that comes back to the Exchange goes back into building the library of best practices.

Will there be adjustments to the TSE model as more cities get involved?

Daley: I think we’re still in the process, trying to figure out what works and doesn’t work. As we talk to mayors and the research people and universities, they’ll see things. It’s a learning experience for us. We don’t have all the answers, and that’s why we’re meeting with quite a number of people to really solidify the whole idea of this exchange.

Healey: We’ve had inquiries from over 50 municipalities at this point. We’re in heavy discussions with 12 to finalize the relationship with them. I anticipate that we’re going to have more.