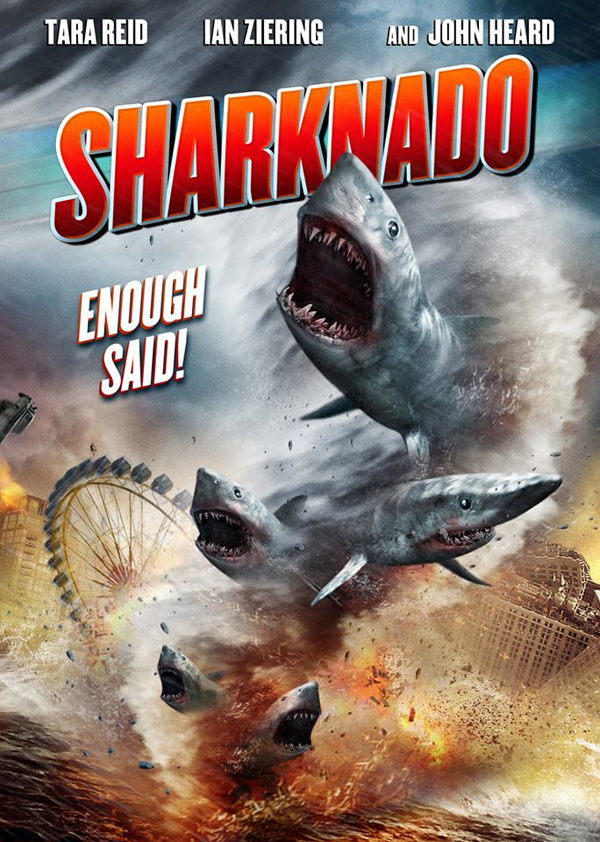 “Global warming IS the reason…”

So exclaims a local TV news reporter as a sharknado—a climate-change-abetted windstorm that sucks in an armada of malevolent sharks—approaches the heart of Los Angeles. As the sharknado descends, the cyclone starts flinging horrifying sharks at an innocent public and Tara Reid. The only logical way to defeat a sharknado is with chainsaws, shotguns, handguns, helicopters, crudely made bombs, and selfless acts of brawny heroism.

Sharknado, which premieres Thursday, July 11 at 9 p.m. Easter/Pacific on Syfy, is a movie for our times. Not only does it address the hotly political issue of climate change, it also features a store owner who claims that the National Security Agency—the gigantic entity that Edward Snowden pissed off—is responsible for generating and unleashing sharknados on the American people. (The female journalist, not the small businessman, is right, though this doesn’t turn out to be much comfort to her, since she gets devoured by a shark during a live broadcast.)

Sharknado, directed by makeup effects wiz Anthony Ferrante and written by Mutant Vampire Zombies From the ‘Hood! scribe Thunder Levin, is a product of the “mockbuster” mill The Asylum, a studio well-known for making cheap B movies and knock-offs. (Past productions include Snakes on a Train and Titanic II). And watching the star of Bring It On: In It to Win It, the dad from Home Alone, and one of the guys from Beverly Hills, 90210 band together to combat an insurgency of airborne sharks is stupendously entertaining. The laughs are hernia-inducing.

The film raises a serious question: Could a sharknado happen in real life? Animals often get caught in the paths of tornadoes, but they typically die before they get the chance to harm Tara Reid. An Associated Press report from 1969 describes a Florida tornado that swept through Ocean World. Rather than emboldening the sharks and inspiring heightened, Tara Reid-related bloodlust, the tornado sent the startled animals diving for cover at the bottom of their shallow pool. “We haven’t counted the sharks yet,” the Ocean World president told the press as his team frantically checked up on the park’s valuable fish. In the end, his team had no sharknado to report. Furthermore, even if a sharknado were to somehow form and begin chasing Tara Reid, it is improbable that the whirlwind of shark would pose a danger to humans beyond accidental crushing. (Sharks rarely ever hurt people, and you’re more likely to get maimed by your own toilet than by any species of shark.)

If none of this assuages your sharknado-based fears, the federal government is here to help.

“There are records of small fish being picked up by waterspouts, but sharks are pretty big and that makes it a lot harder” Harold Brooks, a senior scientist at NOAA‘s National Severe Storms Laboratory, insists. “And how are they gonna survive outside of the water? My guess is if [the tornado] gets some baby sharks, they might get thrown. But they wouldn’t do a whole lot of damage—assuming they live.” Brooks went on to say that if a twister were strong enough to scoop up a bunch of large sharks, the debris present in tornadoes—wood, metal—would essentially filet the animals. “The sharks would not be in very good shape,” he says.

Chris Vaccaro, a spokesman for the National Weather Service, responded similarly: “Sharknado seems to fulfill Syfy’s description as ‘a media destination for imagination-based entertainment,'” Vaccaro writes in a statement sent to Mother Jones. Even so, he humored me with his advice for sharknado readiness. “As with any waterspout or tornado, the best advice is to be in an interior part of the lowest floor of a sturdy building—and not outside, whether sharks are raining down or not.” (The White House did not respond to my tweet asking how President Barack Obama would respond if sharknadoes occurred over an American city on his watch.)

Even though the overall meteorological premise could be viewed as sensational the script did include some accurate scientific information such as the voice stating the National Weather Service issues tornado warnings, that tornadoes are classified on the EF scale (although after the fact not during) and that a hurricane has never hit the California coast before.