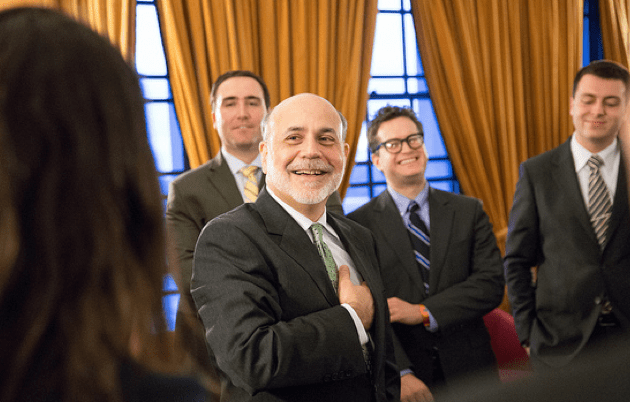 Between 2007 and 2009, the Federal Reserve doled out $16 trillion in massive, super-cheap loans to save flailing Wall Street banks. The 2010 Dodd-Frank financial reform act called for the Fed to limit its emergency lending powers so too-big-to-fail banks wouldn’t count on the central bank saving them again. But three years after Dodd-Frank became law, the Fed still has not budged to curb its bailout powers—and Congress is losing its patience.

One section of Dodd-Frank requires that any future emergency lending by the Fed has to be backed by good collateral, can’t be used to bail out insolvent firms, and can’t go to a single institution. The law also places time limits on the Fed’s emergency loans to banks. But the Fed still hasn’t crafted these general provisions into specific regulations. Until it does, financial-reform advocates say, the central bank can interpret that part of the Dodd-Frank law however it wants—which means banks have little reason to doubt the Fed will again dole out easy money in the event of a financial meltdown.

This “is an important part of Dodd-Frank, designed to explicitly prohibit bailouts,” Sen. Mark Warner (D-Va.), who sits on the Senate banking committee, told Mother Jones when asked about the Fed’s delay in writing up the regulations. “The Federal Reserve should move expeditiously to issue the required regulations.” Banking committee chair Sen. Tim Johnson (D-Ill.), Sens. Kirsten Gillibrand (D-NY) and Sen. Sherrod Brown (D-Ohio), and Reps. David Scott (D-Ga.) and Keith Ellison (D-Minn.) all echoed Warner’s comments. Some members of Congress are so fed up that they’re trying to force the Fed’s hand; in April, Brown and Sen. David Vitter (R-La.) introduced a bill that would place far stronger limitations on emergency assistance from the central bank.

The Fed says it’s still working on it. When pressed on the issue by Rep. Randy Hultgren (R-Ill.) at a recent House financial-services committee hearing, Fed chair Ben Bernanke said he had “made a lot of progress on that rule” and that he hoped to have the final regulations ready by the end of the year.

Bernanke hasn’t explained what’s taking so long, but financial-policy experts say the reason for the holdup is obvious—the central bank doesn’t want to give up any power it might want to use in the future. It’s simpler to dole out money than to upend the way the Fed does business, says Marcus Stanley, the policy director at Americans for Financial Reform. “There are two ways to keep the economy on an even keel,” he explains: “Through clear, transparent rules that treat everyone the same—which is pretty challenging, and involves taking on a lot of interests.” Or, he says, “you get to create a whole bunch of money out of nothing and you can hand it out wherever the problem is…It’s easier to have this magic power.”

Bart Naylor, a financial-policy advocate at the consumer advocacy group Public Citizen, is more cynical. “Power,” he half-jokes. “Some people are humbled by it. Most lust for it.”

Some are more sympathetic. “They have an overwhelming bunch of [Dodd-Frank] rules to write, and this could be down the list,” says Marc Jarsulic, the chief economist at Better Markets, a financial-reform advocacy group. Former Rep. Barney Frank (D-Mass.), who lent his name to the financial-reform law, says he is not worried about the Fed’s delay because there are plenty of new regulations on banks already in place and he doesn’t “see any crisis like the 2008 crisis on the horizon.”

Whatever the reason for the hold up, “the Federal Reserve’s inaction on these rules undermines confidence that it’s serious about obeying the new restrictions,” Stanley wrote in a recent op-ed.

The Fed is still required by law to adhere to broad provisions in the Dodd-Frank law that limit its emergency lending powers, Bernanke assured the House financial-services committee at the hearing last week. “I think that the law is very clear about what we can and cannot do,” he said. “And I don’t think that the absence of a formal rule would allow us to do something which the law prohibits.”

But financial reformers take issue with Bernanke’s comments, arguing that the lack of a watertight rule means the law could be interpreted in a dangerously way. The “legislative language is far too broad and vague to provide an effective check” on the Fed, Stanley explains. Only once the Fed finalizes specific regulations will the Dodd-Frank requirements be fully enforceable. For example, until the Fed lays out what the bar is for solvency, and the procedure it will follow to determine if the firm is solvent, the Fed can follow the letter of the law, without following the spirit of the law. Right now, “the meaning of a ‘solvent’ institution is…in the eye of the beholder,” Stanley says.

If there’s another financial crisis, reformers warn, the Fed could decide that even the least solvent banks are bailout-worthy, and hand trillions to those institutions all over again. “If the world gets messy,” Jarsulic says, the Fed “could blow right through those statutory prohibitions.”