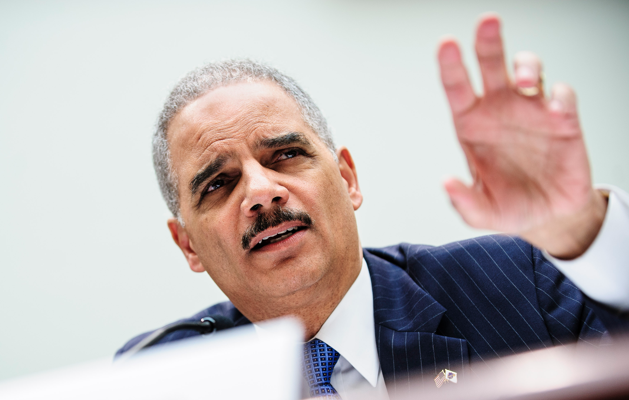 On Friday, the Department of Justice admitted that it had vastly overstated the number of people who had been criminally charged in connection with a year-long mortgage fraud initiative.

In 2011, Attorney General Eric Holder created a multi-agency working group called the Distressed Homeowner Initiative, the first ever effort aimed exclusively at targeting crimes against homeowners in the lead up to the financial crisis. Last October, the DOJ publicized its stunning success: 530 people had been charged criminally as part of the initiative. The actual figure, according to the DOJ, is 107—80 percent less. The DOJ claimed that the defendants had victimized more than 73,000 homeowners. That number is actually 17,185. And the department estimated that homeowner losses associated with the fraud was about $1 billion. The new sum is $95 million.

The DOJ’s original tally included those people who were criminally charged in 2012, as well as defendants who were sentenced or convicted that year but charged before the task force had even been set up. The department also counted cases in which the victims weren’t distressed homeowners.

“As a result, the announcement overstated the number of defendants that should have been included as part of the Distressed Homeowner Initiative,” the Justice Department said upon release of the new numbers. Oops.

Three Bloomberg reporters deserve credit for outing Holder. A couple days after the attorney general first publicized the numbers last October, Phil Mattingly and Tom Schoenberg broke the story that some of the cases included in the DoJ’s tally occurred before the initiative began. And Bloomberg reporter Jonathan Weil, after pestering the department for a list of all the people charged and their case details, wrote a column about the Justice Department’s refusal to comply. That prompted the DoJ to reexamine its numbers.

As Weil noted at Bloomberg on Friday, this is the second time that Holder’s Justice Department has inflated prosecution numbers related to the financial crisis. In December 2010, Holder held a press conference to talk up a sweep by the president’s Financial Fraud Enforcement Task Force. “All the Justice Department did was lump together a bunch of small-fry, penny-ante fraud cases that had nothing to do with one another,” Weil writes.

The Obama administration has been on the defensive for years over its lack of decisive, high-profile prosecutions related to the financial crisis. So it leads one to believe that might help explain why the feds have occasionally inflated their fraud statistics: to persuade the public that they were being tough on financial crimes.

Holder needs to come forward and explain exactly how this happened and why. He used a press conference with the cameras rolling to give out numbers that proved to be false — and they appear to have been willfully false. He should be just as eager to hold another press conference to set the record straight, answer any questions about his apparent sleight of hand when it comes to financial-fraud metrics and apologize to the American people.