The economy added 162,000 jobs in July and the jobless rate fell to 7.4 percent, according to new numbers released Friday by the Labor Department. But the drop in unemployment is mostly due to the fact that fewer people were seeking work last month, and thus were not officially counted as unemployed by the government; the total share of Americans with jobs actually shrunk.

As in recent months, employment rose in low-wage jobs like retail and food services. Retail added 47,000 jobs in July, and jobs in food service and at bars increased by 38,000. Employment also edged upward in the financial sector and manufacturing. July was the 34th month in a row in which the economy gained jobs.

But the labor force participation rate—the total share of Americans who are working—declined from 63.5 percent to 63.4 percent. Here is a chart that the liberal nonprofit Center on Budget and Policy Priorities released recently showing how the drop in unemployment does not translate into a healthier workforce: 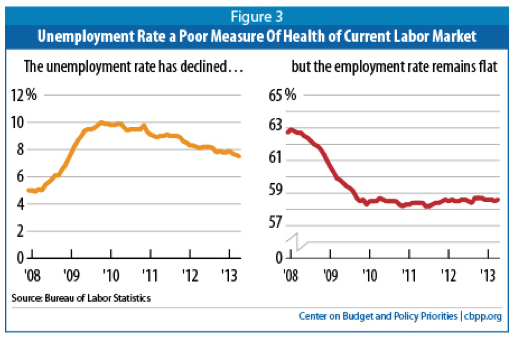 Ezra Klein and Evan Soltas explained why this is happening at the Washington Post Friday:

Unemployment has fallen 2.5 percent from its post-recession peak, but the share of working-age adults with jobs has barely budged….The popular (well, popular among depressed econ wonks) image of discouraged workers sighing and deleting their Monster.com account once and for all is wrong. The rate of labor force exit is actually lower than it was in the aftermath of the 2001 recession. It’s labor force entry that’s suffered.

In particular, it’s suffered among women—and it’s really suffered among young women—who are a lot less likely to enter the labor force than they were in 2002 and 2003.

That is, in certain ways, a more encouraging trend: Discouraged workers who leave the labor force typically see their skills erode. Young people who delay entry are often staying in school longer, gathering skills that will ultimately prove valuable to them (and student loan debt that will prove burdensome).

If the US economy keeps adding jobs at the current rate, it will take about seven years to get back to the pre-recession jobs level, according to the Hamilton Project at the Brookings Institution.

That could be likely, given other economic indicators and expected policy. New numbers show that GDP growth was slower than expected in the second quarter of this year. Personal disposable income declined for the first quarter of the year, according to the most recent report, and average hourly earnings fell in June. Another budget impasse in Washington this fall may mean that sequestration cuts continue through this year and beyond. And the Federal Reserve could soon cut back on its economic stimulus measures given the recent superficially positive jobs numbers.