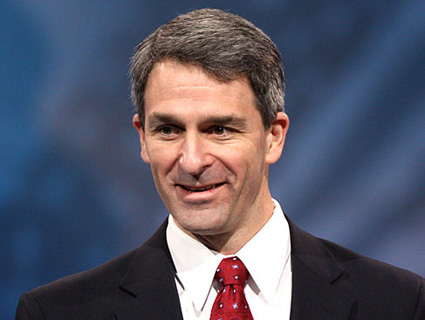 As a member of the Virginia Senate, GOP gubernatorial nominee Ken Cuccinelli used his email newsletter to tout his role in founding State Legislators for Legal Immigration (SLLI), a group dedicated to cutting off economic, education, and employment opportunities to undocumented immigrants. Cuccinelli, who is now the state’s attorney general, has softened his views in recent months to appeal to a broader audience as he runs for governor. But as a potential swing-state governor, his past statements clash with the Republican National Committee’s post-election autopsy stressing the importance of immigration reform for the future of the party.

SLLI was launched in 2007 by Pennsylvania state Rep. Daryl Metcalfe, a Republican. The group aligned itself with anti-immigration hardliners in an effort to convince the Supreme Court to use the 14th Amendment to end birthright citizenship—a position Cuccinelli endorsed in a Senate resolution urging Congress to take action against what he called “anchor babies.” According to its mission statement, the group also aims “to provide a network of state legislators who are committed to working together in demanding full cooperation among our federal, state and local governments in eliminating all economic attractions and incentives (including, but not limited to: public benefits, welfare, education and employment opportunities) for illegal aliens, as well as securing our borders against unlawful invasion.”

In May 2007, Cuccinelli endorsed SLLI in his newsletter, the Cuccinelli Compass, writing, “I was one of the founding members of State Legislators for Legal Immigration.” He spelled out a version of the group’s mission statement, expressing the importance of eliminating incentives that “continue to lure illegal aliens across the border,” and wrote that he supported sending “illegal aliens back to their home country.” He also wrote, “You can count on me to remain vigilant on this issue!” Cuccinelli sent out the newsletter days after stating in an SLLI press release that “[p]orous borders and lax immigration enforcement have left us vulnerable not only to terrorist attacks but to increasing levels of crime in our communities,” specifically those who “traffic their deadly cocktail of drugs and gang violence into Virginia.” (Read the full text of the email’s immigration section below.)

In 2012, Latino voters represented just 5 percent of the vote in Virginia, so it’s unclear how much of an effect Cuccinelli’s immigration views will have on the race for governor. But the majority of Virginians support immigration reform to some degree. And Cuccinelli’s opponent, Democrat Terry McAuliffe, has hit Cuccinelli on his immigration rhetoric while endorsing the Virginia DREAM Act, which would allow children of undocumented immigrants to pay in-state tuition at public universities. But in a 2007 interview, McAulifee took a harder stance against immigrants “who have been here illegally and have taken advantage of the situation,” supporting “a plan to get them back to the countries they came from” and “shut these borders down.”

More recently, Cuccinelli has backed off his hardline rhetoric. In March, the Washington Post noted that Cuccinelli had scrubbed an immigration issues page from his website that had been online as recently as last November, eights months after he filed paperwork to run for governor. The page highlighted his opposition to in-state tuition for undocumented immigrants and his support for a voter ID law. It also noted his role in passing legislation to require state contractors to run background checks verifying employees’ legal status and to grant local authorities the power to investigate houses thought to be boarding undocumented immigrants. (A cached version of the page is still online.)

Lately, Cuccinelli has tailored his statements on immigration depending on his audience, but has continued to keep his rhetoric toned down. In his first debate with McAuliffe in July, he said, “I want very much to see some sort of compromise reached in the area of immigration…so that we could move on to other issues,” and declined to take a position on a path to citizenship for the nation’s 11 million undocumented immigrants. But at a town hall two days later, Cuccinelli said he supported a bill “where everybody knows the rules and what they’re going to be and does it without amnesty, so we don’t repeat the 1986 problem again.” (The 1986 immigration reform law gave undocumented immigrants a path to citizenship while failing to halt further illegal immigration.) He has also voiced support for President Barack Obama’s record number of deportations of undocumented immigrants.

Meanwhile, SSLI continues to breathe fire. Metcalfe, for example, has voiced strong opposition to the Senate immigration reform bill, denouncing it as “amnesty” for “illegal aliens” and “out-of-touch with reality, a dereliction of duty and nothing short of a fiscal disaster for the states” that would jack up taxes on American citizens. Metcalfe did not immediately respond to a request for comment. A spokeswoman for Cuccinelli’s gubernatorial campaign did not respond to a request for comment about the candidate’s current opinion of the group.

The Cuccinelli Compass section on immigration from May 25, 2007: 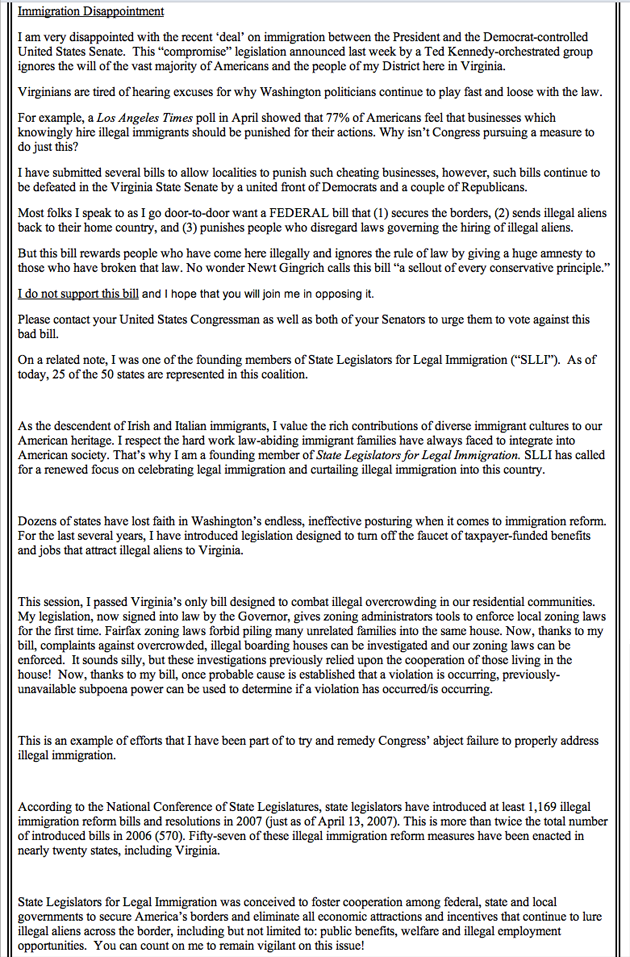