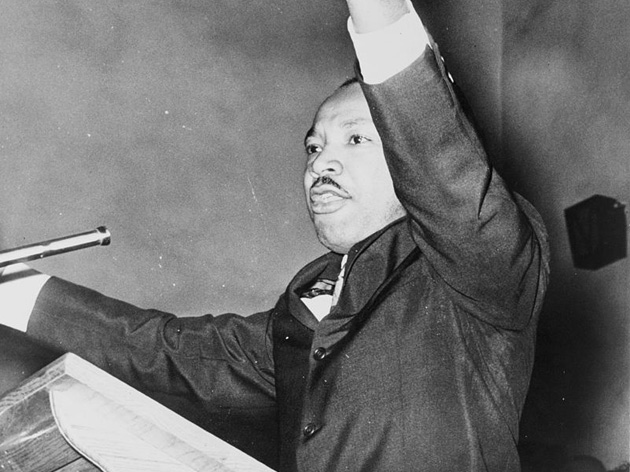 Update, January 14, 2015: The children of Dr. Martin Luther King, Jr., are currently in a legal battle with each other over who owns some of King’s personal items, including his Nobel Peace Prize medal.

I have a dream that on the 50th anniversary of the March on Washington, little black boys and girls will be holding hands with little white boys and girls as they watch the footage on TV of Martin Luther King Jr. delivering his famous words. I have a dream that on the red hills of Georgia, the great-grandsons of former slaves and the great-grandsons of former slave owners will be able to sit down together at the table of brotherhood this week, open their MacBooks and pull up the seminal speech on the internet.

But that speech is not free, alas.

It will not be in the public domain until 2038, 70 years after King’s death. Until then, any commercial enterprises wishing to legally broadcast King’s iconic “I Have a Dream” speech, delivered August 28, 1963, on the National Mall, or reprint its words must pay a hefty fee. CBS and USA Today learned this the hard way in the 1990s, when both reached undisclosed settlements with King’s estate after using the speech without permission. Intellectual Properties Management, the King family business that works in conjunction with music company EMI Publishing to license King’s copyrighted image and works, did not respond to an inquiry from Mother Jones about the cost of hosting a video of the speech on our site.

Due to the well-known lawsuits against news organizations and other smaller legal scuffles, King’s children have a reputation for maintaining a level of control over their father’s legacy that is rigorous at best and avaricious at worst. Critics, including civil rights icon Julian Bond, bristle over the fact that “I Have a Dream” is kept under strict watch in the name of controlling King’s image at the same time it’s licensed by rich companies for use in TV commercials, including a 2010 Mercedes-Benz spot, an Alcatel ad, and a particularly galling 2001 Cingular Wireless campaign that also included quotes from Kermit the Frog and Homer Simpson.

Representatives from the King family did not respond to requests for comment, but in the 2007 book Children of the Movement, King’s son, Martin Luther King III, denied that he and his siblings are trying to profit from their father’s image and said that there are numerous licensing requests that they reject. But they are forever haunted by comparisons to their dad, who eschewed personal wealth. “My father gave away everything,” he said. “He didn’t worry about money. People expect us to be like him.” But the issue for copyright reform advocates, historians, and journalists is not so much whether the King family is making money, but how to negotiate the general sense that the works and image of King have such an educational and historical resonance—particularly on the 50th anniversary of the March on Washington-—-that it seems preposterous that the copyright on his speech is so strictly enforced.

Jennifer Jenkins, director of the Center for the Study of the Public Domain at Duke University’s School of Law, says she respects the right of King’s family to maintain their father’s legacy. “[But] EMI Publishing—they have a raison d’être, which is to exploit copyrighted works,” she says. “And that goal may be somewhat at odds with what King would have wanted people to do with his speech.”

Of course, the speech is not technically out of reach for anyone. The DVD of the speech is sold for $20 by the King Center, the Atlanta-based nonprofit organization founded by King’s late wife Coretta Scott King and run by their surviving children, Martin III, Bernice King (the center’s CEO), and Dexter King (eldest sibling Yolanda King died in 2007). But many argue that for certain purposes, it should be available free of charge.

“Most people have a strong intuitive sense that, particularly with the the 50th anniversary coming up, or every year on MLK Day, that any kid, any educator, anybody should be able just to Google it online and watch the speech in its entirety,” Jenkins says. “It’s a piece of history, and I think most people think that he would have wanted it to be available [for free]—maybe not available for use in a commercial, but certainly available for educational and journalistic purposes or documentaries about the civil rights movement.”

When documentary filmmaker Orlando Bagwell was making Citizen King, a 2004 documentary that covers the years between the March on Washington and King’s assassination in 1968, he didn’t have trouble with the archival houses, photographers, or people who worked with King, he said during a 2004 conference. He ran into trouble with King’s estate. “It got kind of ugly for a while,” he said.

He tells Mother Jones that as a documentarian who deals constantly with historical footage, he’s stuck in an odd position. “Dr. King died young and his family and his children rightfully feel that they have a right to some of his writings and his words and his image, and I don’t really have a problem with their interest in getting some sort of return on that,” he says. At the same time, the speech is an “important public document that represents a very clear moment in history that people want to reference on a regular basis.”

Bagwell produced and directed two episodes of Eyes on the Prize, a 14-hour documentary series about the civil rights movement. The King estate notably sued the series’ late producer Henry Hampton over unlicensed footage, and he settled for an undisclosed amount. Because of licensing issues, the series was out of circulation and unavailable for purchase from 1993 to 2006, when PBS cleared the hurdles (and removed footage for which licenses weren’t renewed) so that it could air again. For filmmakers like Bagwell, these encounters with the King estate have created a chilling effect. “The ‘I Have a Dream’ speech is one document and one piece that I think people kind of shy away from because the King family has been very tough and hard to work with around that particular document,” he says.

It’s a lot easier for the King’s estate to monitor what goes into a PBS documentary than what goes on the internet. Internet Freedom Day, unofficially observed by advocates on January 18, 2013 (the first anniversary of the defeat—by congressional inaction—of the Stop Online Piracy Act), fell on the Friday before Martin Luther King Jr. Day. This presented a perfect opportunity for Fight for the Future, a nonprofit that advocates copyright freedom on the internet.

The group posted the full video of the “I Have a Dream” speech on Vimeo and encouraged people to share it. Evan Greer, a campaign manager for the organization, says, “As an organizer, it was important to find a way to connect these issues and the fact that Dr. King’s speech is copyrighted and has been frequently removed from YouTube and has been kept out of civil rights documentaries, and in a number of ways, has been kept from reaching its full reach online and in the world because of copyright. It seemed like a great place for us to make a comment on that.” In the lead-up to the March on Washington’s 50th anniversary, she says, Fight for the Future has been contacted by numerous journalists about their campaign, including one “major news organization” that was running into problems licensing the speech.

The video that Fight for the Future posted in January was only up for a few hours on Vimeo before it was removed for violating the site’s terms of service, Greer says. Interestingly, and indicative of the fact that enforcing copyright isn’t an exact science, the same video has still not been taken down from YouTube, several months later. Other videos of the full speech can also be found on the video sharing site, but that’s no victory over arcane copyright laws, says Jenkins.

“People can say, “Hey! It’s available there, so what are you complaining about? Chill out. It’s on YouTube!’ That doesn’t mean it’s guaranteed or that it’s permanent,” she says. “Whereas if it were in the public domain, anybody could put it up and no one would have the right to take it down.”

Free at last—but for how long?