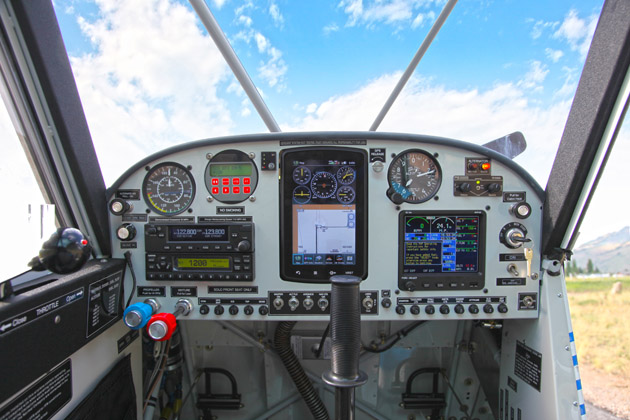 This story first appeared in Wired and is reproduced here as part of the Climate Desk collaboration.

Aviat Aircraft has introduced the first airplane able to run on both standard aviation fuel and compressed natural gas. The airplane is the first to fly on CNG, opening the door to use a cheaper and cleaner alternative to gasoline.

Alternative fuels have been a pressing issue in general aviation, with many small airplanes still burning low-lead fuel, something the car industry phased out decades ago. But aside from the environmental benefits, the reduced cost of CNG can also help make flying small aircraft less expensive, and the test airplane that debuted in Oshkosh is the first step in realizing its potential.

“One aspect we’re particularly excited about is the opportunity to dramatically reduce the cost of learning to fly,” said Greg Herrick, an aircraft owner who spearheaded the idea to convert an airplane to operate on CNG. “If a flight school installs a simple CNG refueling station they can cut the cost for the student’s fuel, perhaps by thousands of dollars.” That’s not an insignificant sum when you consider the cost of getting a pilot’s license can run near five figures.

Herrick owns an Aviat Husky, a popular small aircraft aimed at pilots who like to fly in and out of grass runways and other atypical airports. While the cost savings is an added benefit, CNG will dramatically reduce the pollutants emitted by smaller airplanes that are now burning the typical aviation gasoline known as 100 low lead.

Aviat converted one of its Husky airplanes to fly on both 100LL and CNG, and they flew it to Oshkosh from the factory in Afton, Wyoming. The airplane is equipped with both tanks and can run on either fuel at the flip of a switch. The company says other than the CNG fuel tank mounted to the belly and associated controls, the only changes made to the airplane were using a slightly higher-compression engine. Additionally, Aviat says the performance was better with the CNG fuel and the engine even ran cooler. With an economy cruise setting, the Aviat estimates their plane can fly for about seven hours on CNG.

Because the demonstration model can burn both types of fuel, the company says there are no limitations to where it can fly. But like all switches to an alternative fuel source, it’s all about infrastructure. Before the widespread adoption of CNG in aviation, refilling stations would need to be installed at airports. The most likely starting point would be flight schools where the cost savings would be significant, and with many local airports hosting training programs, it wouldn’t take long for smaller airports to start having CNG on tap.