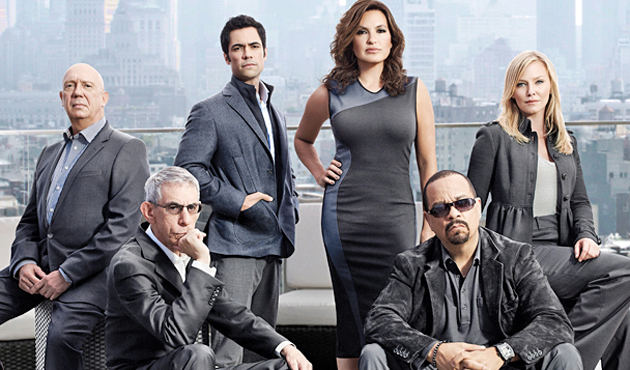 Paula Deen kills Trayvon Martin. That’s the premise of an upcoming episode of the long-running NBC drama Law & Order: Special Victims Unit. The series doesn’t return for its 15th season until September 25, but news of its third episode has already generated some buzz—and whipped right wingers into a frenzy.

According to Warren Leight, the show’s executive producer, the upcoming episode is about “a very high-profile celebrity woman chef who thought she was being pursued by a rapist and [when she] turned around it was a teenager.” The chef is a fictionalized version of Paula Deen, the Savannah, Georgia-based cooking personality and author who was recently embroiled in a racial discrimination and sexual harassment lawsuit. The minor she fatally shoots is clearly inspired by Trayvon Martin.

On Fox News’ The Five, co-host (and sworn enemy of Muppets) Eric Bolling described the episode’s plot as “yanking America’s race scab right off,” with the rest of the panel then tearing into SVU and NBC. (NBC is a popular target of conservative pundits on Fox; they seem to be perpetually mad at NBC, NBC News, and MSNBC, and are beside themselves over the impending Hillary Clinton miniseries starring Diane Lane.)

“The only thing missing is a George Bush or Dick Cheney character in there engaging in a serial killing spree of some Muslim characters,” opined NewsBusters’ Matthew Sheffield.

“There should be a way for Paula Deen to sue these people for slander,” declared Dan Calabrese over at Herman Cain‘s website.

“The Law & Order franchise, the brainchild of Dick Wolf, has a history of retelling recent history through a progressive lens,” wrote Christian Toto for Breitbart.com.

It’s no secret that SVU has a liberal streak. The show built an episode around Rep. Todd Akin’s “legitimate rape” comment, and not flatteringly so. Back in the sixth season, the assistant district attorney subpoenaed Donald Rumsfeld. The series is also consistently critical of gay-bashers. And in the forthcoming Paula Deen-Trayvon Martin episode, “There’s a lot of stop and frisk elements to [the SVU story], as well,” according to Leight.

If you know anything about the Law & Order universe, you know that SVU fashions many storylines using this “ripped from the headlines” approach in a bid for relevance, publicity, and higher ratings. Other examples include SVU‘s Michael Jackson-inspired episode, or a 2012 episode that combined elements of Occupy Wall Street and the Jamie Leigh Jones gang-rape allegations into one narrative.

This is also not the first time that SVU has directly pissed off Fox News. In a 2009 episode titled “Anchor,” a defense attorney explains why he’s chosen to defend man who murdered the kids of undocumented immigrants. The lawyer puts most of the blame on conservative media figures, rather than the killer himself: “Limbaugh, Beck, O’Reilly, all of them. They’re like a cancer spreading ignorance and hate. I mean, they have convinced folks that immigrants are the problem, not corporations that fail to pay a living wage or a broken health care system.”

This did not sit well with Fox host Bill O’Reilly. “That is simply defamatory and outrageous, and Dick Wolf is a coward for putting it out there,” he complained on The O’Reilly Factor. “Dick Wolf, the executive producer of Law & Order, is a despicable human being for distorting and exploiting this very complicated situation. I mean, enough is enough with these network pinheads who shove propaganda down our throats under the guise of entertainment.”

NBC and representatives for the series did not respond to requests for comment.