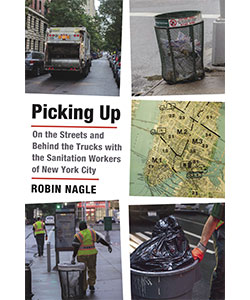 Picking Up: On the Streets and Behind the Trucks With the Sanitation Workers of New York City

Skewered eyeballs, bags of hydrofluoric acid, and discarded $1,325 Armani pants with the price tag still attached pepper Robin Nagle’s account of what it takes to be a New York City “san man.” From her stint as an official anthropologist-in-residence at the Department of Sanitation, Nagle explores how crucial this unseen work is to a city’s survival. It’s no dry social-research thesis: With Picking Up, Nagle joins the likes of Jane Jacobs and Jacob Riis, writers with the chutzpah to dig deep into the Rube Goldberg machine we call the Big Apple and emerge with a lyrical, clear-eyed look at how it works.

Nagle spoke to Mother Jones via Skype about how she was able to gain the trust of the DSNY and her sanitation coworkers in order to write the book, the hazards she faced on the job, and why a collective fear of death could be shaping our attitudes toward trash.

Mother Jones: You told some stories in the book about sanitation workers who receive all sorts of horrific injuries on the job. Before you started accompanying sanitation on its daily routes, did you have any idea how dangerous it would be?

Robin Nagle: I had read the Bureau of Labor Statistics’ numbers about how sanitation work is always in the top 10 of the most dangerous occupations in the country, along with things like mining and deep sea fishing and logging. I knew from reading about it that it was a hazardous job, but I didn’t have any sense of how often I would encounter those hazards myself or see my colleagues encounter those hazards every day. I don’t care where we were in the city; if we were on the street picking up trash there would be a moment pretty much guaranteed in every shift where we’d just have to pull back and be very careful, or we would have gotten hurt.

MJ: One thing that struck me was how much our individual waste habits affect sanitation workers. How you put a bag out onto the street could ruin someone’s day or potentially someone’s life. Which of these habits most directly impact sanitation workers, and which would you like to see change after writing this book?

RN: I’m very glad you picked up on that. When you put out your garbage–and of course I’m using the generic “you”–you are not the last person who will have to deal with it. When you have, let’s say, a piece of broken glass, or something really jagged, or you’re doing a renovation and you’re putting out wood that’s got nails blooming out from one tip of it, or any kind of hazard you know handling requires great care, think about how to perhaps add a few layers of buffer packaging, sandwiching, anything diminishing the hazard a little bit. As a householder, as a garbage-creator, just being a little more mindful of the fact that once it’s on the curb or in the can, that’s not the end point by any means. There are so many moments of physical handling after that.

RN: There’s one really encompassing answer to both of those questions, and that’s time. I was in a position where I could wait out the bureaucratic stalling I first encountered from the DSNY, and when one mayor left and another was elected, that was my door in. But that took a few years. In terms of the issue of trust, that’s a common challenge for anyone doing extended work, especially in situations where journalists—in journalists it’s more of a hit and run relationship. You get in, you get the story, you get out. They knew that model well. And it usually reverberated badly for them. So when I showed up, their instinct and their wisdom told them to keep a distance, which of course I in my naivete did not anticipate. And when I finally figured out all those dynamics, it made perfect sense. At the beginning, I was as clueless as an absolutely new anthropologist or first-time journalist who’s puppyish with enthusiasm: “I’m in, and everyone’s gonna love me!” Nuh uh. Not at all.

MJ: What were your biggest challenges there? Were there moments you felt you had to prove yourself to your coworkers?

RN: All the time. It’s largely a man‘s world. So there would be the challenges of some jokes that were a little off-color. Like, they were bodied, or they were just raw. And those were tests of, “Is she prissy? Is she prudish? Is she going to judge us for this?” And once I got to particular garages, I realized they didn’t normally talk like that. It was partly a show for me. Any time I was on the street I was very eager to be the first one on the street picking up whatever it was that needed to be lifted, because I didn’t want people to say, “Oh, she’s a girl, she’s not strong enough.” But one of the ways I overcame the initial doubts about me is that I kept showing up and my story never changed. I was consistent. And not because I set out to be, but because the project just took a long time. And people realized that if they told me things, they didn’t get hurt. Telling me wouldn’t go back to the people who would discipline them.

MJ: You also discuss garbage as more than a physical problem, but an ideological one.

RN: I think Americans in general—the anthropologist in me is screaming not to make that broad generalization—but Americans in general don’t deal well with death. And I think garbage is threatening because it’s a form of death. It’s a material object that’s been consigned to this endplace. Our end is as inevitable—and who knows?—maybe as messy and difficult as the things we throw away everyday. The casualness with which we create discards, and the difficulty of grappling with the fact of our own mortality, I think are also linked. But I think the ideologies of garbage, there’s an economic component to this. If we really looked at the waste stream of the nation, the constructions of capitalism we take for granted…I don’t see how we could possibly let them continue.

MJ: Another theme you bring up quite often is invisibility. It struck me how DSNY workers resembled a caste of untouchables in your account of how they’re perceived, and often the butt of jokes.

RN: How the outside world sees you when you’re wearing the uniform, sometimes it’s infuriating, the dehumanizing attitude you encounter on the streets. And generally, the more affluent the neighborhood, there’s more likely that there’s going to be condescension. At least that’s an informal sample of my own experience. There are others that feel intensely enough that they don’t tell neighbors what they do for a living. They don’t want anyone outside of their work environment know what they do for a living. And they don’t want to have to encounter and then have the burden of the judgment of neighbors and acquaintances who assume they know what that means and then push that onto the worker.

But I’ve talked to people in the managerial ranks who were promoted up off the street, and I tell them, your job is the most important job in the city. Far more important than mine. If I stop working tomorrow, if the program I run at NYU folded tomorrow, if the university folded tomorrow, a lot of people would be out of work, but the dynamics of the city—I don’t know if you’d feel it in eastern Queens, or in Inwood. If sanitation just stopped today, you’d feel it in Inwood today, or eastern Queens, and right here at NYU. So, there are lots of ways of measuring the worth of a particular form of labor, but what I learned at sanitation is how inside-out that values system has become.

MJ: I couldn’t help but think of Jane Jacobs and her ideas about how city blocks and neighborhoods ought to function when reading your book. Do you have any plans to articulate a series of theses on how the city should be run?

RN: No. It’s not so much how cities should be run as it is how we need to understand all the parts of the systems that we depend on every day, and how deeply dependent we are on human beings to make those systems run smoothly. And I’d love to see somebody do a book like mine with New York City’s waterworks department, the Department of Environmental Protection. I claim that sanitation is the most important uniformed force on the streets of New York–I think you can make a parallel claim for the small army that keeps the waterworks of the city running smoothly.

My next writing project will focus on Freshkills, the landfill and now park. But I want to use that as a fulcrum on which to balance stories about fill, and how garbage and discards have shaped the physical geography of New York and many cities. Because of that we walk on our own history every day, but we’re largely unaware of it. So my next project is not so much about how cities work, but: What is the dynamic of creation, and memory, and loss, and discard, and garbage? And whose claims are heard and whose claims are ignored when those issues are at play?

MJ: How did you balance being a person who gets to know her sources quite well as friends and colleagues, in addition to being a nonfiction writer and academic documenting their work?

RN: I kind of have followed my own version of the Hippocratic oath. Most people were surprised that I brought the book to them before it was a finished product. I was very careful not to say to anyone, “I will make whatever changes you want.” My passion for this work, for them, for what they do, it’s quite real. This is the first book that’s been written about the New York City Department of Sanitation, but there are lots of books about the police department, lots of books about the fire department. I think there should be lots of books about sanitation. And just as in any other workforce, there are people who are not so saintly, and people on the more saintly end of the spectrum. You just hope it reads as real.