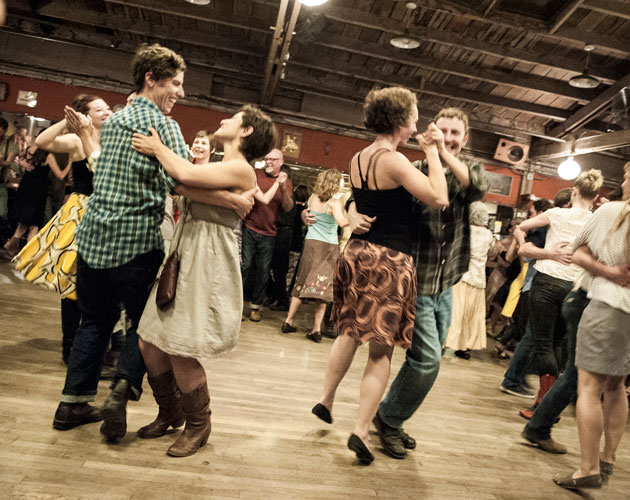 When I catch fiddler Suzy Thompson on the phone, she’s pretty amped to tell me about the 10th annual Old Time Music Convention in Berkeley, California. As BOTMC’s director and founder, Thompson has coaxed old-time musicians from around the world to not only perform at the small annual festival, but to lead its square dances and workshops with eager local participants and amateurs. The outdoor string band contest, held at the park near the Berkeley Farmers’ Market, often takes center stage: jug bands, Italian tarantellas, a Greek band complete with undulating belly dancer—”anything goes as long as it’s unplugged,” the program reads. The result is a gathering modeled after Appalachian fiddle and banjo conventions that emphasize “doing rather than just watching.” There’s not much separation between the stars and the regular folk who take part.

That attitude is what attracted Foghorn Stringband fiddler Sammy Lind to old-time music in the first place. “I was really drawn to the social aspect of it,” he tells me during a break from his current tour in Washington. “I loved getting together; it felt great to be part of a crew of people like that.”

Lind grew up in Minnesota listening to rock music, and he was the drummer in indie-punk bands as early as 12 years old. But he soon found himself more swayed by the “real simple old sound” of acoustic music, from Bob Dylan to Spider John Koerner to the Carter Family. Around the time he moved to Portland for college, he started fiddling, and realized there was a small world of people his age interested in old-time music, and eager to jam.

In 2000, he teamed up with mandolinist Caleb Klauder and founded Foghorn Stringband, an energetic yet traditional group that plays “ass-kickin redneck” music.

Unlike many of their contemporaries, Lind and Klauder, now joined by Canadian bassist Nadine Landry and guitarist Reeb Willms, bring youthful energy to traditional tunes without worrying too much about trying to modernize them.

“From the very beginning, Caleb and I have always looked towards the most authentic sound, and tried to learn from our elders,” Lind says. A high point in his career came when Foghorn played in the thick of the Appalachians in a tiny town in Kentucky, around 2005: 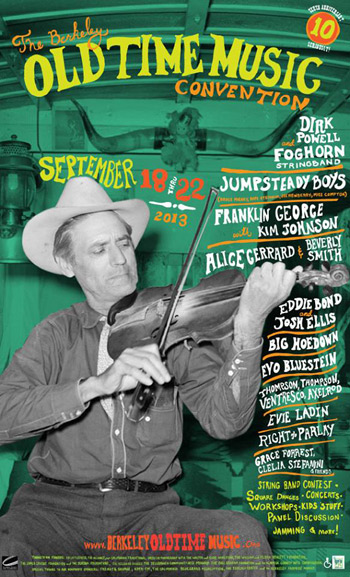 Playing at the BOTMC this week, they’ll be sharing the bill with some pretty seasoned old-timers, including the Grammy-winning multi-instrumentalist Dirk Powell, who’s on a break from touring with Joan Baez’s band. But Lind doesn’t get intimidated by the veterans at these types of gatherings: “I’ve always felt really, really welcome.” Plus, he can hold his own. Writes Fiddle Freak blogger Stuart Mason: “Sammy saws a fiddle tune that could beat the devil.”

Old-time music fests are family friendly, but don’t be fooled, Lind says. “These festivals are as wild as any. It can get good and rowdy.” Though Suzy Thompson’s homegrown event doesn’t have too many bells and whistles planned for its 10th, she did push for an extra special lineup this year. You’d be wise to check out Eddie Bond, she advises, because he rarely travels outside of Appalachia. (In addition to his mastery on banjo, autoharp, fiddle, and guitar, Bond is a renowned yoddler and flatfoot dancer.)

Local old-time fans are eager to see the Jumpsteady Boys, consisting of four great players: Bruce Molsky, Rafe Stefanini, Mike Compton, and Joe Newberry—it will be their first time playing together on the West Coast. Molsky (see our interview “Bruce Molsky is Not Fiddling Around“) and Stefanini will also revive their old act, Big Hoedown, for a free set smack in the middle of the string band contest on Saturday.

Many readers won’t have heard of some of these acts, let alone the locals who’ll show up to jam in the lobby before the shows, but as Thompson puts it: “All these people are rock stars to me.”