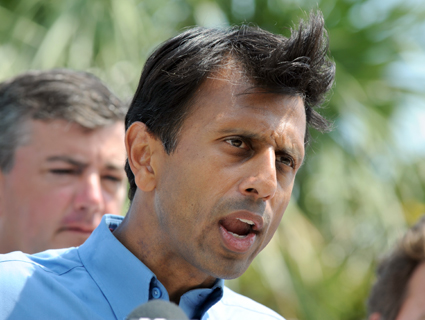 In late July, the Southeast Louisiana Flood Protection Authority–East, an independent board created by the state legislature in the aftermath of Hurricane Katrina to shore up the state’s levee system, filed a lawsuit against the oil companies. All of them. The committee targeted nearly 100 petroleum producers with operations on the Gulf Coast—including titans such as BP America, Exxon-Mobil, and Chevron—for what it termed a “mercilessly efficient, continuously expanding system of ecological destruction.”

But in a state where even the lawn in front of the governor’s mansion is sponsored by Dow, the flood board’s lawsuit has faced a massive pushback. And no one has been more forceful in their opposition to lawsuit—and in the defense of the oil companies—than Republican Gov. Bobby Jindal. He dismissed it almost immediately as nothing more than a “windfall for trial lawyers” and alleged that the legal action would interfere with the administration’s own unfunded long-term plans. When the nominating committee that appoints flood board candidates met for the first time on Friday, it received a warning from Baton Rouge: The lawsuit would be a litmus test for the governor, and any nominee who supported it would be rejected.

“I don’t think they’re evil,” says the board’s vice president John Barry, an award-winning historian and one of the members whom Jindal has promised not reappoint, referring to the oil companies. “But by the same token, we think we have a very strong case that they broke the law, and I don’t think anybody is immune from prosecution just because they provide jobs. Those jobs aren’t gifts.”

There’s a certain irony to the governor’s power play. Jindal is preparing for a possible 2016 presidential bid built on the idea that Louisiana has turned the corner after the worst natural disaster in its history. But as he winds down his second term, he’s poised to undo one of the legislature’s signature post-Katrina accomplishments.

Prior to Katrina, the state’s levee boards were political offices, bastions of old-school cronyism with incongruous responsibilities and little in the way of oversight powers. Their duties included overseeing Mardi Gras parades and the construction of new casinos, but not the maintenance of the levees themselves. Nor were board members generally experts in their field. That changed in 2006. A new state constitutional amendment consolidated parish levee boards into two main bodies, covering both sides of the Mississippi River. This time, members were independent, experts in their field, and—at least nominally—given management, oversight, and control of levees in their respective districts.

The appointment of Barry was illustrative of the new board’s approach. The only member of the board without a scientific background, he caught the eye of policymakers with the publication of his 1998 book on the 1927 Mississippi Flood, Rising Tide, which detailed the role of the Army Corps of Engineers in the destruction of rural parishes in South Louisiana. The book became required reading in the Corps after Katrina, and Barry picked up a fan in Jindal, with whom he emailed regularly while the rising GOP star was still a member of Congress.

“I’m the least technical person on the board probably, and I’ve gotten two awards from the National Academy of Sciences,” Barry says.

Progress has been slow, though. “The flood authority is the authority with no authority,” gripes Stephen Estopinal, an engineer and self-described “right-wing extremist” who serves on the board. Its recommendations are routinely overruled by the Corps and by regional planners. So it decided to try something new.

Last December, Barry, Estopinal, and their colleagues informed Graves that they were filing a lawsuit to recoup some of the expenses coastal erosion had incurred on their specific levee district. Louisiana’s coastline—and by extensions’ the district’s defenses—faced two main challenges. The first problem was scientific: the combination of resource extraction, flood control networks, and climate change was eating up land at a rate of about one football field a day. The second was financial. Under Jindal, the state had drafted a comprehensive coastal restoration plan but never appropriated the funds to put it into action. The hefty fines accrued by BP for its 2010 oil spill might be a helpful downpayment, but it barely scratched the surface of what was needed. Why didn’t the board, which had legal authority for all things flood control, use the legal system to extract more?

The 11 board members, the majority of whom are registered Republicans, voted unanimously to go ahead with the suit. Although the board only serves New Orleans and its suburbs, a victory would move other parts of the Gulf Coast to follow in their path. Or so the thinking went.

But Jindal’s response has been swift. He pledged to fight the lawsuit in court by asserting that the board didn’t have the power to take such an action (the state has not, however, filed for summary judgment to the dismiss the case). When that didn’t dissuade the board from bringing the suit, Jindal informed the legislature that opposition to the lawsuit would be a litmus test for any new nominee to the board. And then his administration went one step further—Graves hinted that the legislature would craft a new statute, when it next reconvenes, that explicitly prohibits the flood board from pursuing the matter any further: “I don’t see any scenario where this levee district doesn’t get gutted—or, say, ‘reformed’—in the next legislative session.” To members of the levee board, the culprit is clear.

“It would be crass to say that it was something like you hear people say, ‘Oh, they’re in the oil company’s pocket’—I don’t think that’s it at all,” Estopinal says. “I just think [oil money] has kind of blinded some people to the really dramatic changes that are happening that aren’t being addressed.”

“The reality is the governor who has vetoed the renewal of a cigarette tax because he’s so anti-tax—and even this legislature overrode that veto—but this anti-tax governor wants taxpayers to pay to fix what the most profitable industry in the world damaged?,” says Barry. “Am I missing something?”