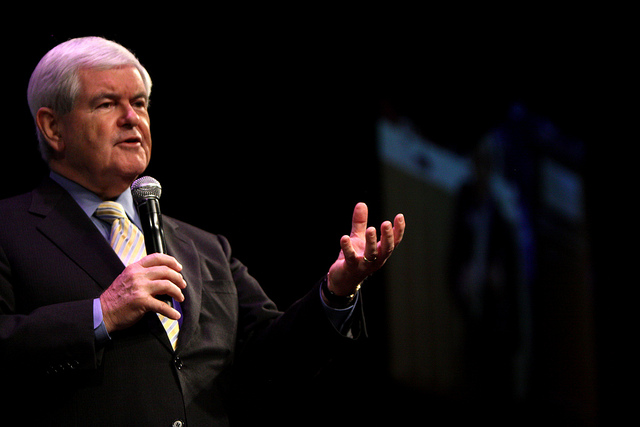 On Wednesday, David Corn and I reported that former House Speaker Newt Gingrich was raising money for a political action committee that so far in 2013 has raised $1.4 million—supposedly to dole out to conservative candidates—but only donated 1 percent of this haul to politicians, including $5,000 each to Sens. Mike Lee (R-Utah), Rand Paul (R-Ky.), and Ted Cruz (R-Texas). Our story raised this question: Is Gingrich’s American Legacy PAC just a cash cow for his favorite consultants and associates? As it turned out, the article raised another issue: Gingrich’s work for the PAC—which lists him as a founder and honorary co-chair—appeared to violate CNN’s ethics rules covering his new job as a co-host of the rebooted Crossfire.

As Media Matters first reported in early September, CNN standards chief Rick Davis said that if Gingrich “is helping fund a candidate and that candidate’s on the show, or being discussed on the show, of course he’ll disclose that. Disclosure is important when it’s relevant.” On August 20, American Legacy PAC announced by email a donation of $5,000 to Rand Paul’s 2016 reelection campaign. Weeks later, Paul appeared on the first episode of Crossfire. Gingrich did not disclose American Legacy’s donation to Paul or his role with the PAC.

Pressed over whether Gingrich violated the network’s rules, CNN changed its tune. In a statement to Media Matters, Davis, the CNN standards chief, says the network was “clarifying” its ethics guidelines and that Gingrich did nothing wrong:

We are clarifying the policy and making it clear Newt Gingrich is not in violation. The policy: If a Crossfire co-host has made a financial contribution to a politician who appears on the program or is the focus of the program, disclosure is not required during the show since the co-host’s political support is obvious by his or her point of view expressed on the program.

Given that much of the critical political action these days occurs in primary elections and that the GOP is in the midst of an internal battle between tea partiers and establishmentarians, a viewer might not be able to assume that Crossfire‘s Republican co-hosts support all Republican candidates. Thus, it might enlighten viewers—and provide greater context—if a Republican co-host disclosed donations that revealed his or her party favorites. (The same is true regarding the Democratic co-hosts.) It would hardly be out of line to suggest that Gingrich might be even more supportive of a Republican candidate that he and his PAC finances. So the disclosure of his fundraising efforts certainly could be considered news-you-can-use for Crossfire viewers. Just not at CNN headquarters.

Mother Jones has made several requests for comment from Davis. So far, no response.

UPDATE: Via a spokeswoman, CNN standards chief Rick Davis sent this statement to Mother Jones about Gingrich’s PAC fundraising and his Crossfire job:

Crossfire hosts have never been required to disclose their contributions regarding guests on the show because their political support and activism are there for all to see. It’s obvious they support liberals or conservatives.

Davis’ earlier statement that Gingrich would have to disclose any work “helping fund a candidate” who appears on Crossfire or is discussed on the show is no longer the case.