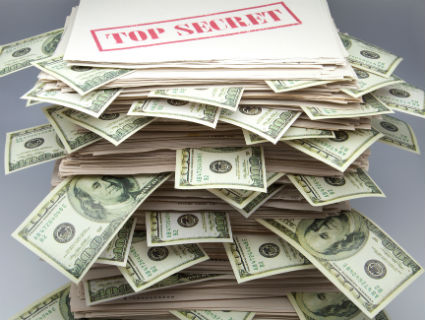 We’ve known for more than a year that major players in conservative politics use a network of nonprofit groups to move tens of millions of dollars around the country while keeping the identities of their donors a secret. This has been called a “shadow money trail” and a “daisy chain” of dark money, and it lets donors pour money into politics and issue campaigns anonymously. Now, the folks at OpenSecrets.org are out with a report shedding new light on the murky constellation of groups used to circulate that money.

OpenSecrets’ report focuses on two 501(c)(4) nonprofits: TC4 Trust and the Center to Protect Patient Rights. Both of these groups have ties to the Koch brothers and their network of wealthy conservative and libertarian donors. It’s not clear where the funding for TC4 Trust or the Center to Protect Patient Rights actually comes from—as in, who the original donors are—but OpenSecrets has discovered that these two outfits are engaged in “a high-stakes game of hide-the-ball, disguising transfers of millions of dollars from one to the other behind a veil of Delaware limited liability corporations.” For years, both organizations have used intermediary groups that are also shrouded in secrecy to shuffle their money.

This flowchart helps visualize just how TC4 and the Center to Protect Patient Rights use a handful of middlemen to move their money around:

The Center to Protect Patient Rights came onto the scene last year, when the group was revealed to be a conduit for dark money flowing into a number of well-known conservative groups. In 2010, CPPR funneled $44 million into outfits such as Grover Norquist’s Americans for Tax Reform, the Koch-backed Americans for Prosperity, Club for Growth, and 60-Plus Association, which bills itself as the conservative alternative to the AARP.

CPPR, run by a political operative named Sean Noble who has worked for the Kochs, came to be seen as part of a daisy chain of right-leaning nonprofits shuffling secret money around the country. There is very little information on where exactly CPPR’s money comes from because the group’s donors are not disclosed. One of few chances to get a peek at the donors bankrolling this dark money universe could come from California, were the state’s attorney general and election watchdog are jointly investigating an $11 million donation made in 2012 that passed through CPPR. That investigation has gone deep enough that, as I reported in April, conservative operatives are on edge about what it could reveal. “A lot of folks are going to have their dirty laundry hung out,” a conservative lobbyist told me at the time, “and it’s not going to be pretty.”