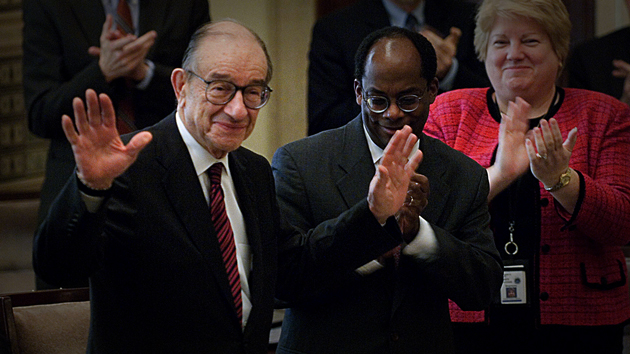 Former Fed chairman Alan Greenspan in a scene from "Money for Nothing"Photo by Britt Leckman. Courtesy of Liberty Street Films

Hindsight may be 20/20, but luckily for filmmaker Jim Bruce, so was his foresight into the financial crisis of 2008. Prior to the collapse of the housing market, Bruce was a film editor for movies like X-Men: The Last Stand and The Incredible Hulk. But Bruce also had been reading up on financial news and recognized that many of the biggest banks were over-leveraged and at risk of failing. “I was writing an email newsletter to family and friends starting in late 2006 saying ‘watch out’,” he recalls. “You didn’t have to be a rocket scientist to see how bad the mortgages being given out were.” Bruce recognized that a small increase in foreclosures would wipe out the over-extended lenders. So while millions of Americans invested in new homes, Bruce was investing in their implosion.

“All I did was short home builders and banks,” he explains. His short bets paid off big, as Countrywide tumbled and AIG collapsed, doubling his investment. Now what to do with all that money? The answer: Make a down payment on a documentary about the Federal Reserve, which Bruce believed had not been held accountable for its role in creating the financial crash that made him a bundle.

The product of Bruce’s back-handed thank-you is Money for Nothing, a sometimes harsh, sometimes cautious critique of the Fed and its 100-year history. The film includes many candid interviews with current and former members of this immensely powerful financial institution, including active regional governors and current vice chair Janet Yellen (who many suspect will replace current chairman Ben Bernanke to become the first woman to lead the central bank).

Clearly missing from the collection of direct interviews are Bernanke and former Fed chair Alan Greenspan. “We reached out and were declined several times,” Bruce says. He did, however, nab an interview with former Fed chair Paul Volker, who made tough decisions in the early 1980s to tighten the Federal Reserve’s monetary policies to reduce inflation. Initially, Volker was tough on Bruce as well. “When I first met with him,” Bruce recalls, “he really kind of grilled me about ‘Where are you from? And who’s funding this?’ It kind of scared the life out of me.” Eventually, Volker agreed to speak, and shared his opinions about the mistakes the Fed had made, such as avoiding stricter regulation of the mortgage market.

Critics of Money for Nothing, such as Wall Street Journal economics editor David Wessel, have called it out for showing a mostly minority opinion of the Fed’s policies. “I think the average person gets the majority view all the time,” Bruce responds. “All they hear, if anything, is what Ben Bernanke thinks. And I think conventional wisdom was proven to be so wrong in the years leaning up to the crisis.” But Bruce does give credit to the Fed for saving the financial system, and his proposed fix for its problems is a traditionally conservative one. He and many of his subjects want a less risky system—one with more value placed on savings and less on debt.

Fans of the film have sent Bruce additional materials, such as this chart showing instances of laughter found in the transcripts of the Federal Open Market Committee (the Fed’s regularly scheduled meetings). Transcripts are made public after about five years, so this peek behind the curtain ends in late 2007. But note how things were no longer quite so funny as the meltdown of 2008 approached. 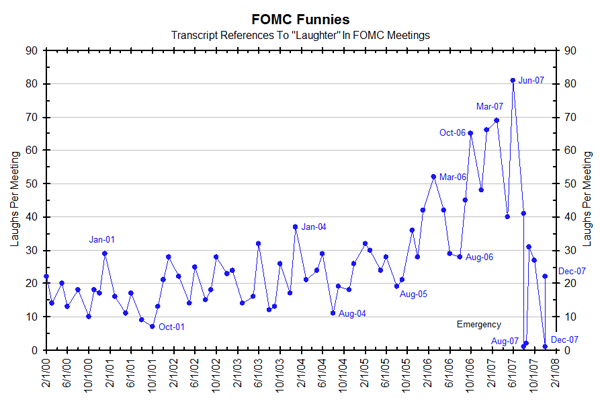 Money for Nothing opens Friday, September 27, in New York City, Los Angeles, Santa Ana, and Denver (where former Kansas City fed governor Tom Hoenig will participate in a Q&A session). Future openings and screenings are listed on its website.