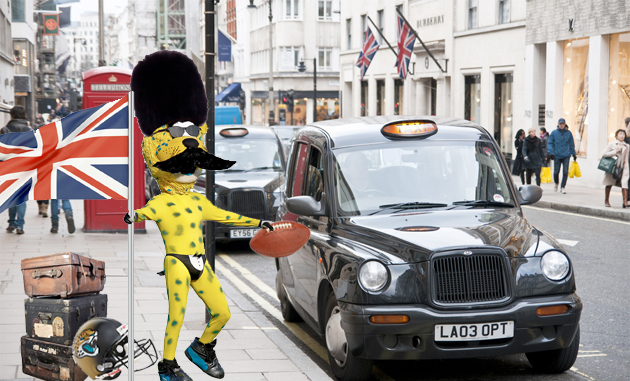 Los Angeles
LA has been the NFL’s biggest bogeyman ever since the Raiders returned to Oakland in 1995. Most recently, in his push for a new stadium, Raiders owner Mark Davis said that Los Angeles is “always” on his mind. Miami Dolphins CEO Mike Dee raised the specter of relocating Perfectville to LA after Florida opted against giving the team $3 million a year for 30 years for stadium renovations. The City of Angels also looms over teams like the Rams, Jaguars, and Bills, and it served as a believable enough landing place to get Minnesota to agree to a $975 million deal to make sure the Vikings didn’t leave. The threats aren’t empty, though—LA has two proposed stadium sites that are “shovel ready” along with a massive media market without professional football. With no NFL expansion plans, it seems less a question of if a team will move there and more a question of when.
Relocation likelihood: 5/5 moving vans

Toronto
The Buffalo Bills have played at least one home game in Toronto for the past few seasons, but they were able to convince the state and county to agree to a $271 million stadium renovation deal at the end of last year that comes with a 10-year lease (although the team can opt out relatively cheaply after seven). While the Bills enjoy a relatively large fan base in the area, Toronto officials could look elsewhere in the meantime, with Jacksonville and New Orleans getting special mentions. Whether it’s the Bills, Jags, Saints, or another team who likes Scott Pilgrim enough to move, relocating a franchise to Toronto would be a lot easier than moving one to London. Let’s just hope everyone on Twitter gets their “Are they gonna punt on third down?” CFL jokes out of the way quickly.
Relocation likelihood: 3/5 moving vans

London
While Londoners prepare for a barn-burning matchup of winless teams, NFL Commissioner Roger Goodell has made no secret of his interest in putting a franchise across the pond. It’s a nice bargaining chip for the league and its owners—as the St. Louis Rams tried to get the city to agree to a $700 million stadium deal, the NFL scheduled them for three years of London home games. This year, the Jacksonville Jaguars were scheduled for four straight London games, with the team’s owner calling the Jaguars “the home team for London.” The league is even pushing a fun club called the Union Jax. Despite these moves, there are plenty of obstacles to putting a franchise in the United Kingdom anytime soon, including huge travel times, players reluctant to move overseas, and the potential for incessant football/football jokes during broadcasts. (Not everyone is so pessimistic.) If a team moves to LA soon, expect London to make a nice new bogeyman.
Relocation likelihood: 2/5 moving vans

BONUS NBA/NHL SITE: Seattle
Your favorite football team might be safe, but that doesn’t mean your local basketball or hockey team is sticking around. Fans of the SuperSonics came tantalizingly close to regaining a franchise this year, only to see the Sacramento Kings stay put. The NBA, on the other hand, saw an extremely effective strategy for getting local officials to help pay for a $448 million new arena in downtown Sacramento. As teams like Milwaukee negotiate new stadium deals, expect threats to turn the team into the new Sonics to come early and often. Seattle also sits pretty as a large market without an NHL team, making the strategy just as useful for hockey owners. The Edmonton Oilers management team took a scouting trip out to Seattle after negotiations with Edmonton over a new arena got off to a rocky start. Both leagues have also discussed expansion, however, so it’s possible the Emerald City could see new franchises without having to poach them.
Relocation likelihood: 4/5 moving vans