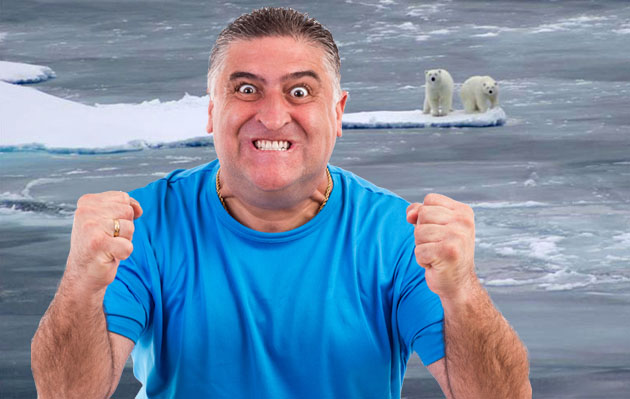 Leading into Friday’s upcoming release of the UN Intergovernmental Panel on Climate Change’s Fifth Assessment Report, climate skeptics have gone into overdrive. They’re doing anything they can to undermine public acceptance of the dangers posed by global warming, which, at least according to a leaked draft of the report, is “extremely likely” (or, 95 percent certain) to be caused by human activities.

Unfortunately, much of this glut of misinformation is likely to make its way to people in your life—whether it’s your congressman, your favorite talk radio host, or even your family. Heck, this stuff might even pop up in a heated conversation over your dinner table with your Uncle Larry (who always seems to be dying to argue about climate change).

To prepare you, here’s the truth about four myths you’re likely to hear about climate science and the IPCC report:

Myth 1: Global warming has stopped. Perhaps the most prominent attack on climate science right now centers on the claim that global warming is “slowing down,” sometimes followed by insinuations that scientists don’t understand why this is happening, or even that they have tried to cover it up. On occasion, this attack gets stretched into the assertion that global warming has stopped entirely over the past decade and a half, or even is just plain “over.” Possibly the strongest articulation yet of the meme came from Republican Rep. David McKinley of West Virginia, who said last week that there has been “almost no increase in temperature” in the last 40 years.

But that’s just incorrect, as the figure above from the World Meteorological Organization, marking global average temperatures by decade, clearly shows. Global warming hasn’t stopped at all. What’s actually happening is that the rate of surface warming has slowed somewhat over the past decade or more, probably because more heat has gone into the planet’s oceans. In other words, the excess heat is still here in the Earth system; it’s just not where we typically measure it. “Global warming is alive and well,” climate scientist Kevin Trenberth of the National Center for Atmospheric Research explained to me last month, “but about 30 percent of the heat is going deeper into the ocean.”

At the same time, an increase in volcanic eruptions also seems to have generated a slight and temporary cooling influence that’s offsetting some of the warming effect of carbon dioxide, by reflecting some sunlight away from the planet. But none of this is a reason not to worry about climate change. Climate researchers say it’s likely that this temporary global warming slowdown will soon subside and warming will snap back, perhaps stronger than before.

Myth 2: Arctic sea ice is recovering. One of the most dramatic indicators of global warming was last summer’s record low in the extent of Arctic sea ice—a drop that was 18 percent below the previous low in 2007. Since nothing about global warming suggests that you break a new record every successive year, it’s not surprising that the Arctic sea ice melt was less dramatic this year. This year’s seasonal low in ice extent was merely the sixth-lowest level on record.

Somehow, global warming skeptics found a way to call this good news. In particular, the Mail on Sunday in the United Kingdom ran an article hailing a “rebound” in sea ice and pronouncing that “And now it’s global cooling!” Because 2013 did not beat 2012’s record, and was only the sixth-lowest sea ice extent on record, skeptics celebrated an “increase of 60 percent.” Actually, here’s what’s happening to Arctic sea ice when you include, er, context: 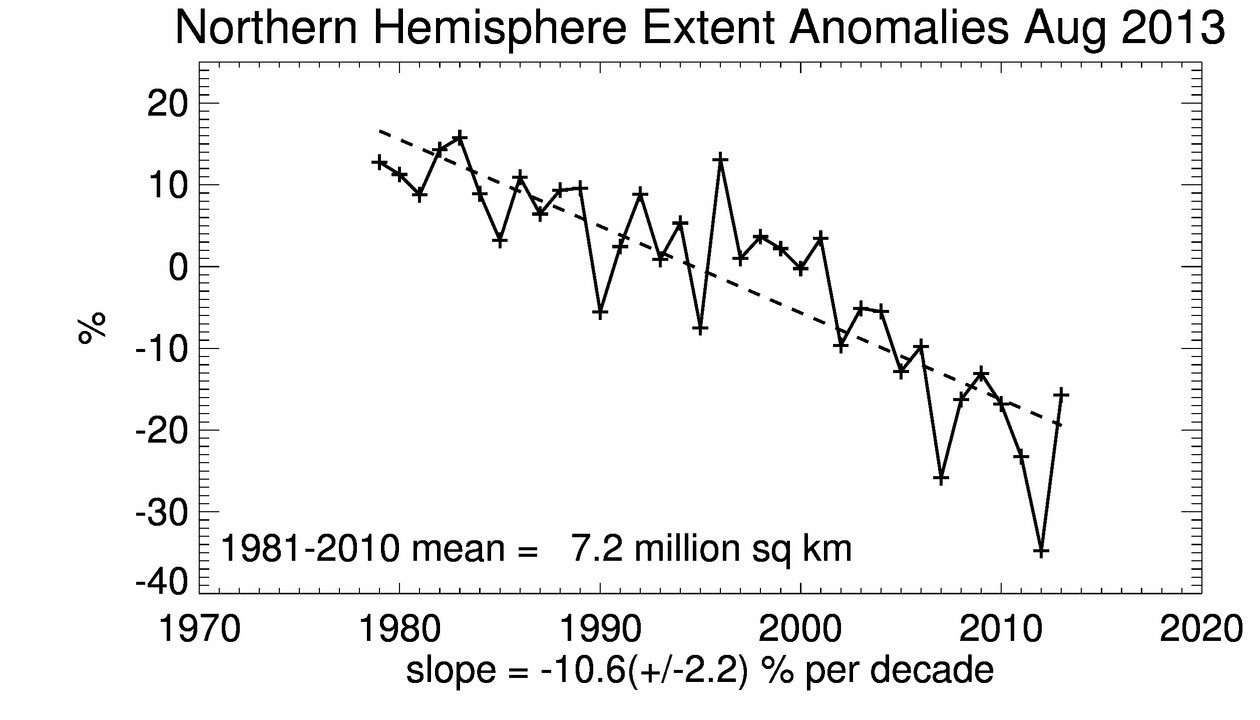 No wonder political psychologists have recently found that ideology can wreck your ability to do math. For a thorough debunking of sea ice misinformation, see this video with astronomer and reality-based blogger extraordinaire, Phil Plait.

Myth 3: Growing Antarctic ice undermines global-warming concerns. Lately skeptics have also been drawing attention Antarctic sea ice, which just hit a 35-year record high. Rush Limbaugh actually appears to have gotten confused over this, claiming recently on his show that Arctic ice was at a record extent, before correcting himself and realizing that he meant Antarctica—the place with, you know, the penguins rather the polar bears. 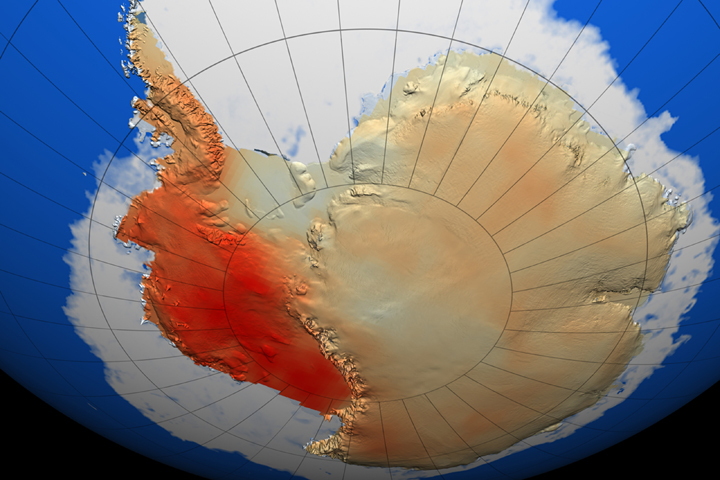 That Antarctic sea ice has been growing of late is not in dispute, but again, this is no refutation of global warming. Scientists are currently trying to figure out why Antarctic sea ice is increasing, and one theory points to stronger winds due to a stronger polar vortex—a phenomenon apparently capable of overcoming a general warming of the Southern Ocean.

Overall, it is important to understand that the Antarctic is very different from the Arctic. As Michael Lemonick of Climate Central puts it:

The IPCC’s leaked draft report says scientists have “low confidence” in their understanding of what’s going on with Antarctic sea ice. It also predicts, with “low confidence,” that this ice too will decline by the end of the century. In other words: Antarctica is complicated, remote, and little understood.

All of which, incidentally, highlights why you should trust scientists on climate change: They know what they don’t know and are honest about it, as the Antarctica case shows. That’s why, when they express 95 percent confidence that humans are driving global warming (in the same report that confesses a relative lack of understanding of what’s happening with Antarctic sea ice), it is worth paying attention.

One recent version of this argument was articulated by British science writer Matt Ridley, who argued in the Wall Street Journal that the leaked IPCC report “dials back the alarm” on global warming. Similarly, climate change contrarian Bjorn Lomborg is now arguing that the new report will support a “moderate climate change message,” rendering “alarmist scenarios ever more implausible.”

All of this is pretty hard to believe, given that IPCC chairman Rajendra Pachauri has recently stated that when it comes to the climate issue, it’s “five minutes before midnight.” But let’s consider the arguments for a more modest global warming, starting with Ridley’s. 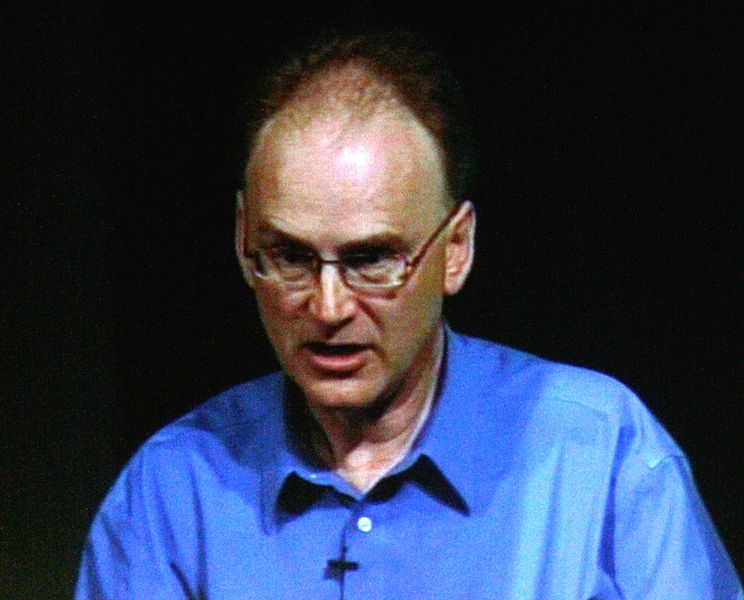 Matt Ridley, author of The Rational Optimist (2010), thinks global warming will be on the low end. Wikimedia Commons

Ridley draws our attention to a small change to the low end scientific estimate of how sensitive the climate is likely to be to a doubling of carbon dioxide emissions. In 2007, the IPCC put the low end of this range at 2 degrees Celsius; now—at least according to the leaked draft report—it is 1.5 degrees. The upper end of the range has not changed: It is 4.5 degrees Celsius.

Does this 0.5-degree shift matter? Although the rosiest scenario may have gotten slightly rosier, there’s no reason to assume we’ll be so lucky, or that global warming will be mild. Rebutting Ridley in the Wall Street Journal letters section, climate scientist John Abraham of the University of St. Thomas put it like this:

Basically, he is arguing that the Earth may undergo a slow simmer, whereas most scientists think it will be a faster boil. Either way, the consequences are enormous.

And there’s another problem with Ridley’s outlook. Much of his op-ed focused on how much warming we’ll see in the next 70 years or so—in fact, he argues that by 2083, the “benefits of climate change” may “still outweigh the harm.” Abraham counters that “we are already seeing economic and ecological damage, including increased precipitation in some regions, with consequent flooding, more severe drought in other regions, increased storms, heat waves and rising sea levels.”

In any case, the IPCC draft report plainly says that global warming will continue well past the year 2100. That’s only the beginning. The draft report explains that we can expect some of the carbon that we’ve emitted to stay in the atmosphere for over 1,000 years and for warming to continue for “several centuries.” The report implies that over the long term, sea levels could eventually rise on the order 5 to 10 meters (other scientists have placed it higher still).

Lomborg, for his part, acknowledges that global warming is a “problem,” just a modest one. “The IPCC’s predictions do not support alarmist predictions of global temperature rise that are often in the order of 5ºC (9ºF) and 1-2 meters (3-6) feet of sea level rise—not to mention Al Gore’s 6 meters (20 feet),” he claims. Yet much of this may depend on your time frame, as we’ve seen.

The upshot is that nobody can be absolutely certain which scenario for global warming in the 21st century will actually be realized. The question is, and has always been, about managing risks—risks not just for us, but risks to our children, grandchildren, and untold future generations if we leave them a badly damaged planet. Ridley and Lomborg could be right that global warming will still be relatively mild after 70 years, and will stay on the low end. But can we really take that chance?