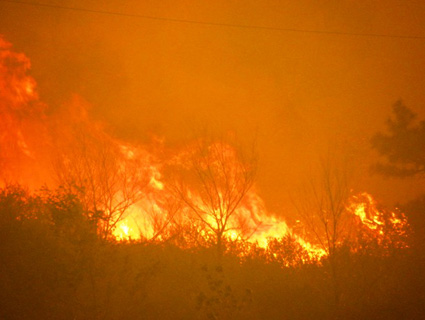 Flames from the High Park Fire west of Ft. Collins in June 2012. US Department of Agriculture

The severe flooding that barreled through the Colorado foothills last week and took at least 8 lives resulted from a freak tempest that’s been deemed one of the worst in the state’s history. In just a few days, Boulder received more than half its normal annual precipitation. It’s quite a reversal from the persistent drought and destructive wildfires Coloradans have recently contended with; in 2010, the Fourmile Canyon fire outside of Boulder became the state’s most destructive to date, until it was surpassed last summer by the High Park and Waldo Canyon fires of 2012, which caused tens of thousands of evacuations along the Front Range. These extreme swings—from parched and burning to flooded—have led some to wonder if climate change is at play; Chris Mooney does a great roundup of the thinking on this in a piece yesterday.

Torrential rainfall, rather than past wildfires, was the biggest factor in Colorado’s flooding.

There’s also been speculation that effects from these recent wildfires could have worsened the flooding: A National Geographic post points to how a lack of vegetation causes denuded hillsides to fail to trap enough water, and Live Science notes that debris slides were spotted in recently burned regions like the High Park Fire area and Boulder’s Fourmile Canyon. There’s good reason to wonder if burn-scarred areas might’ve exacerbated the problem. Wildfires affect soil quality and can increase stream flows and erosion by 10 to 100 times compared to normal forests. Scorched hillsides can send more debris down canyons.

The experts I reached out to with this question agreed that flash floods are often a result of thunderstorms hitting burned areas with repellent soils and lack of vegetation. But most of Colorado’s recent flooding doesn’t exactly fall under this scenario: “Remember that the area that has been burned compared to the area where rain fell is relatively small,” says Lee MacDonald, a hydrology expert at Colorado State University. Some of the rivers that were flooding and causing problems last week, such as in Big Thompson Canyon, weren’t coming out of large burn areas, he says. Instead, the unusual rainfall—deemed “biblical” by the National Weather Service—was the biggest factor in all the runoff.

Wildfires have a large effect on small and medium flooding events, but when rainfall is off the charts, the effect of burned areas shrinks. “It’s going to be difficult to separate out the part of the flooding that was increased because of fire because it was just so much water,” says Kevin Hyde, a post-doc studying post-fire erosion at the University of Wyoming. Proximity could play a role: “the closer you are to the burned areas,” Hyde adds, “the more impact the rainfall has.”

Still, the compounded damages from the cycle of wildfire and flooding could very well be amplified on the Front Range in coming years. Climate models foretell larger regional storms, and scientists have also predicted bigger, more intense wildfires in Colorado’s future. “What is that going to mean for the people living in the mouth of these areas?” wonders Hyde. If the 100-year flood that turned Boulder inside out last week is any indication, living at the base of the Rockies—while arguably worth it—isn’t getting any less complicated.