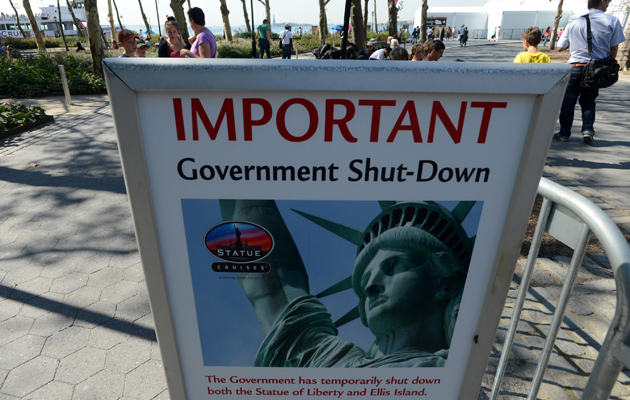 The shutdown has been bad news for babies in Arkansas.Wang Lei/Xinhua/ZumaPress.com

The federal government entered shutdown mode at midnight on Monday, after Congress failed to pass a continuing resolution that would keep departments and agencies up and running. Though some Republicans have dismissed the immediate impact of the shutdown, quite a lot of people have already been affected.

Kids with cancer: 30 children who were supposed to be admitted for cancer treatment at the National Institute of Health’s clinical center were put on hold, along with 170 adults.

Pregnant women: Several states had promised to pick up the tab if the US Department of Agriculture stopped funding the Supplemental Nutrition Program for Women, Infants and Children (WIC)—but not Arkansas, where 85,000 meals will no longer be provided to low income women and their children.

People who help pregnant women and babies: The 16 people who administer the WIC program in Utah will be furloughed—in order to free up money to continue funding the program.

Whales: The Marine Mammal Commission, which monitors whale populations, is on hiatus.

63-year-old Jo Elliott-Blakeslee: The shutdown of Craters of the Moon National Monument in Idaho has complicated the search for a woman who went missing in the park.

Virginia: 2,000 workers at the Portsmouth Naval Shipyard were sent home on Tuesday, and commissaries in northeast and southeast Virginia, which provide inexpensive groceries to members of the military, closed on Wednesday.

Firefighters: The Bureau of Land Management’s Little Snake Field Office in Colorado says its ability to respond to a fire is “severely limited.”

Firefighter widows: Heidi Adams, whose husband, Token, was killed investigating a fire in New Mexico last month, won’t receive survivor benefits because there’s no one at the National Forest Service to finalize the paperwork.

People who eat food: Eight thousand employees at the Center for Disease Control and Prevention were furloughed, including those tasked with monitoring the outbreak of foodborne illnesses.

People who cook food: The USDA’s food safety hotline has stopped fielding calls from people with questions about food storage and safe preparation.

Animal-semen exporters: The New Orleans Times-Picayune reports, “No one in Louisiana will be able export livestock, embryos, fertilized animal eggs or animal semen.” Animal semen? Yup, the USDA monitors that too.

First responders: The Department of Homeland Security’s Center for Domestic Preparedness in Anniston, Alabama, which trains first responders for states and municipalities, is closed.

Golfers: The Moffet Field Golf Course near Mountain View, California, is closed due to furloughs at the NASA facility where the 18-hole course is located.

Poor Louisianans: The state Commodities Supplemental Food Program, which serves 64,000 people each month, doesn’t have the funds to operate.

People with mysterious illnesses: The Undiagnosed Diseases Program at the National Institutes of Health has stopped accepting new patients, with the exception of children with life-threatening illnesses.

Meningitis researchers: A University of Hawaii research facility shut down.

Newt Gingrich: The former speaker of the House decried the closure of a “tour bus turnaround” at Mt. Vernon:

The tour bus turnaround at mount vernon has been closed by federal police. This is deliberate effort by Obama to hurt the public. Disgusting

Klansmen: A planned march in Gettysburg by the Confederate Knights of the KKK was canceled because the national battlefield park is closed.