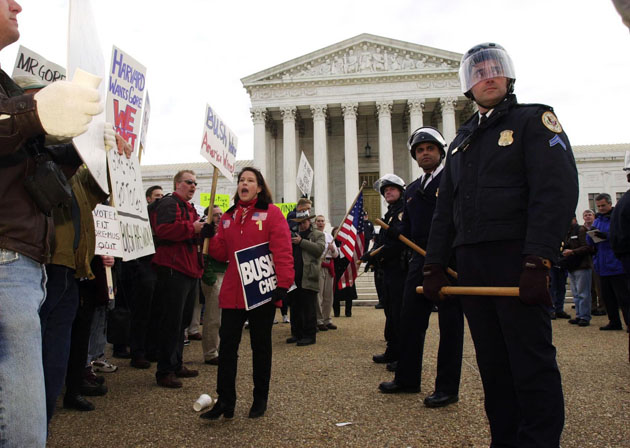 Protestors outside the Supreme Court in 2000.The Washington Times/ZUMA

All the votes from the November 5 election have been tabulated, and the Virginia attorney general race is as close as they come. Democrat Mark Herring holds a slim 164-vote lead over his Republican opponent, Mark Obenshain. The close count has teed up a likely recount for next month, and the Republican candidate has hinted at an unusual legal strategy: basing a lawsuit on Bush v. Gore, the controversial Supreme Court decision that ended the 2000 presidential election in George W. Bush’s favor.

The Supreme Court usually prides itself on respecting the past while keeping an eye toward future legal precedent. But the court trod lightly when it intervened in 2000. The five conservative justices may have handed the election to Bush, but they tried to ensure that their decision would lack wider ramifications. “Our consideration is limited to the present circumstances,” read the majority opinion in Bush v. Gore, “for the problem of equal protection in election processes generally presents many complexities.” The conservative majority wanted to put a stop to the Florida recount, but they hoped their ruling—which extended the 14th Amendment’s equal protection clause to argue that different standards cannot be used to count votes from different counties—wouldn’t set precedent in future cases.

For a time the justices got their wish. But the supposed one-time logic of the controversial decision has begun to gain acceptance in the legal community—particularly among campaign lawyers in contentious elections.

Virginia GOP attorney Miller Baker challenged the attorney general results on Bush v. Gore grounds last week during a meeting of the Fairfax County electoral board, claiming the rest of the state lacked equal protection thanks to the county’s method for tabulating votes. The problem stems from a swath of uncounted provisional ballots in the region. Obenshain had led Herring after initial Election Day results, but the Democrat closed the gap thanks to some misplaced votes in a reliably blue section of Fairfax County, a DC suburb. The Republican-dominated state Board of Elections then demanded that Fairfax change its procedure for provisional ballots midway through counting. But even after the changes, Fairfax still afforded residents several extra days to advocate on provisional ballots compared to the rest of the state. (Other counties had until the Friday after the election, while Fairfax allowed votes to be counted until the following Tuesday.)

Obenshain issued a statement last week that left his options open and mentioned the need for “uniform rules,” which election law expert Rick Hasen interpreted as a sign that the Republican is gearing up for a lawsuit that would base its challenge on Bush v. Gore.

If Obenshain does file a lawsuit using that reasoning, he will be just the latest politician to facilitate the recent rehabilitation of Bush v. Gore. Surprisingly, the court case that anointed George W. Bush president has actually favored liberals in terms of setting legal precedent. “The courts have looked around for some legal authority for the proposition that there is an important federal right to participate in federal elections,” says Samuel Issacharoff, a professor at New York University School of Law who has studied the aftermath of Bush v. Gore, “and the problem they have is that the constitution doesn’t specify this.”

The specific set of circumstances of the 2000 election may have worked against liberals, but the decision’s line of reasoning aligns with a standard progressive value: Despite no explicit guarantee of fair elections in the Constitution, the state has an inherent interest in guaranteeing that political actors cannot arbitrarily change election procedures to value one set of voters over another group. “What the courts have done is they’ve looked for a proposition that you can’t manipulate the rules of the election to determine the outcome,” Issacharoff says. “You can’t keep people from voting in order to do that. You can’t make post hoc changes in a way that takes advantage of your incumbent power to influence the outcome of an election. That’s seemingly such a basic proposition that every other democracy builds it in, hardwired. We have a very old democracy, in which our constitution doesn’t speak to these issues directly.”

Bush v. Gore was largely ignored in litigation in the years immediately following the decision, discarded by legal scholars as a one-off line of reasoning. That began to change after Bush’s reelection, as Democrats searched for ways to combat Republican efforts to restrict access to the polls. In 2006, a three-judge panel from Ohio’s Sixth Circuit of Court of Appeals sided with the plaintiffs’ equal protection argument in Stewart v. Blackwell, but that ruling was later vacated by the full circuit. Bush v. Gore came into play again during the first major recount since 2000, when former Republican Sen. Norm Coleman’s legal team predicated their arguments on the decision (Minnesota courts rejected that argument, eventually allowing Al Franken to take the Senate seat in question).

But in 2012, the Obama campaign found success using Bush v. Gore to fight back against the GOP’s voter suppression laws. Once again, it was the Sixth Circuit that found itself amenable to discarding the Supreme Court’s warnings and treating Bush v. Gore like any other opinion that creates precedent. That court had begun to establish Bush v. Gore as meaningful precedent in two previous decisions—2008’s League of Women Voters v. Brunner and 2010’s Hunter v. Hamilton County Board of Elections—but it went a step further with a pair of 2012 decisions. In Obama for America v. Husted, the president’s reelection campaign convinced first a district judge and then the Sixth Circuit that Ohio’s decision to decrease the days for early voting while maintaining an exemption for military absentee ballots violated the equal protection concepts established in Bush v. Gore. In the other case, Northeast Ohio Coalition for the Homeless v. Husted, a group of conservative judges relied on Bush v. Gore to side with the plaintiffs and overturn a state rule to invalidate votes cast in the wrong location due to poll worker mistakes. “It reads Bush v. Gore as a kind of free-floating license to do equity in election cases,” Hasen said in a law review article on the cases.

“[The citation of Bush v. Gore] wasn’t a throwaway line in some opinion where some district judge wants to stick his thumb in the eye of the court,” says Issacharoff, who advised Obama’s legal team during the lawsuit. “This was at the core of what we were arguing and it was conceptually central to it.”

Even as campaigns turn to Bush v. Gore, the Supreme Court itself has stayed on the sidelines, reluctant to revisit the legal reasoning in the case. They declined to hear an appeal on the 2012 early voting case, the best opportunity the court has had revisit its 2000 decision and correct lower courts on whether it creates precedent. The justices do discuss Bush v. Gore outside the courtroom—Antonin Scalia likes to admonish people to “get over it,” while former Justice Sandra Day O’Connor has expressed doubt on whether the court should have considered the case—but they won’t touch it in their decisions. The case had been verboten in written decisions, never once cited in a Supreme Court opinion until earlier this year, when Justice Clarence Thomas referenced Bush v. Gore in a July dissent for Arizona v. Inter Tribal Council.

Chief Justice John Roberts subtly hinted at his acceptance of the decision when his nomination to the court came before the Senate in 2005. “While it is true that the precise facts presented in Bush v. Gore are not likely to come before the Court again, it is not at all improbable that other election disputes will,” he wrote in testimony submitted to the Senate. “While the Court in Bush v. Gore stated that its ‘consideration is limited to the present circumstances,’ I believe that statement was not meant to deprive the decision of all precedential weight but, rather, to make clear that the precise facts of the case were unique.”

Even as bitter memories fade, the voter protection implications of Bush v. Gore remain uncertain. The Sixth Circuit is the lone circuit court to treat the case as established constitutional fact. “No other circuits have given Bush v. Gore a wide reading (or much of a reading at all),” Hasen writes. “In the rest of the country, Bush v. Gore is still basically dead.” Perhaps Mark Obenshain and Virginia Republicans will change that.