Forget YouTube as your go-to 3:00 p.m. internet distraction. For me, it’s the US patent office website. There is some seriously wild stuff being invented by your fellow citizens, not least in the area of climate change mitigation and adaptation. Here are a few of my favorite climate-related patents issued recently by the office. (I’ve added a little color to the design sketches): 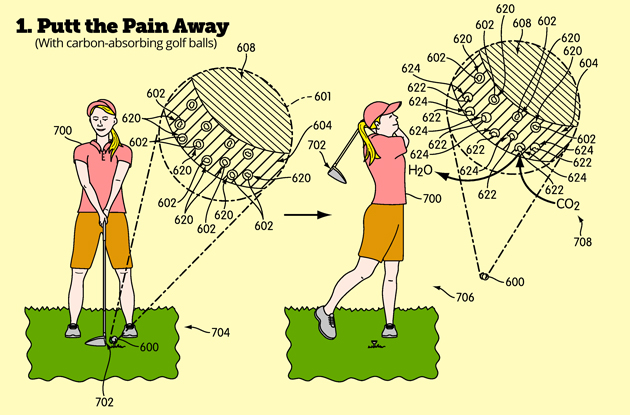 Golf courses are hardly known for being paragons of environmentally friendly land use. They use a massive amount of water and have been found to be net carbon emitters, mainly due to land-clearing. But—phew!—there could soon be a way to shuck that green guilt and keep on swinging.

These carbon dioxide-absorbing golf balls, invented by the golf team at Nike, are intended to “reduce atmospheric carbon dioxide levels to aid in alleviating global warming,” by enabling the “golf ball itself to play a role in the fight against global warming.” (You can’t make this stuff up). Additionally, the Nike inventors claim this is the first time a golf ball itself has attempted to off-set carbon consumed during its manufacture.

Here’s how it works: When you hit the ball, little bits of its surface layer deform and set off a chemical chain reaction that absorbs carbon dioxide as the ball flies through the air. The more times you swing, the greater the surface area exposed to the internal reactions. So, if you’re anything like me, and you need to hit the ball an embarrassing number of times, comfort yourself with the knowledge you’re doing more to save the world more than your pro golf buddies (except all my balls end up in the water). At the end of the game, according to the patent, you’ll be able to see how much carbon you’ve sequestered using a visual indicator on the side of the ball.

Golfing sure beats hammering out a broad international agreement to reduce carbon. But sorry to spike your high: The inventors admit the golf ball could “at best be only carbon neutral, and is not capable of reducing the total amount of carbon dioxide in the atmosphere.” Damn. Really? (After several attempts to organize an interview with the Portland-based inventor Chia-Chyi Cheng, Nike told me the company doesn’t talk to the media about their numerous inventions or patents). 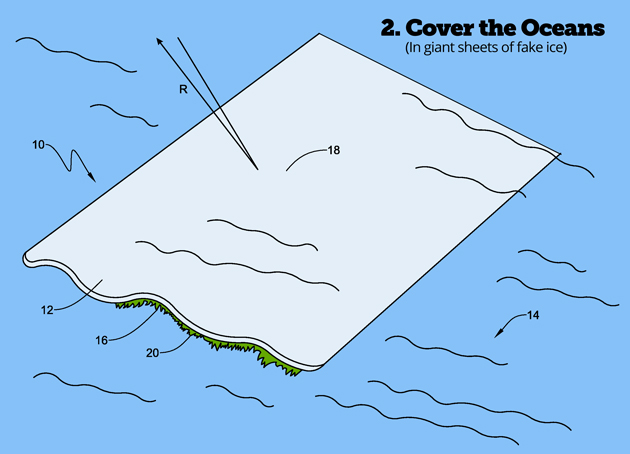 We learned last month that average summer temperatures in parts of the Arctic during the past 100 years are hotter than they have been for possibly as long as 120,000 years. And the Arctic recently registered the sixth lowest summer sea ice minimum on record.

Why don’t we just replace all that melting ice?

That’s the idea behind this recently published patent for artificial ice. According to the filing, an “ice” substrate would be dropped onto the surface of an ocean or a lake and left there to reflect sunlight back into the atmosphere using a 3-corner retro reflector surface (the same technology used by street signs). Meanwhile, nutrients sown on the underside would encourage algae to grow for biofuel production. Algae is a proven energy source. In February 2012, President Obama announced the Department of Energy would allocate $14 million in new funding to develop transportation fuels from algae.

“It seemed like a two-fer to me,” says inventor and engineer Phillip Langhorst from St. Louis, Missouri. “In order to solve global warming we’re going to have to do something on an insanely huge scale. And this is the only thing I’ve seen that’s big enough.”

A few weeks after putting the ice on the water, a ship would come along, scrape the algae off and reapply the necessary nutrients.

“I need help, obviously, to see if this is a viable scheme,” he says, although he admits most companies he approaches balk at the idea. But he argues that facing the realities and costs of big geo-engineering projects like this is becoming increasingly necessary, in lieu of putting a price on carbon: “Pick your poison, you know,” he says. “My goal is not so much to patent this and make a billion dollars off of it; it’s to solve the global warming issue so we all don’t have to move to Saskatchewan?.”

Verdict: Please, can’t we stop the real ice from melting? 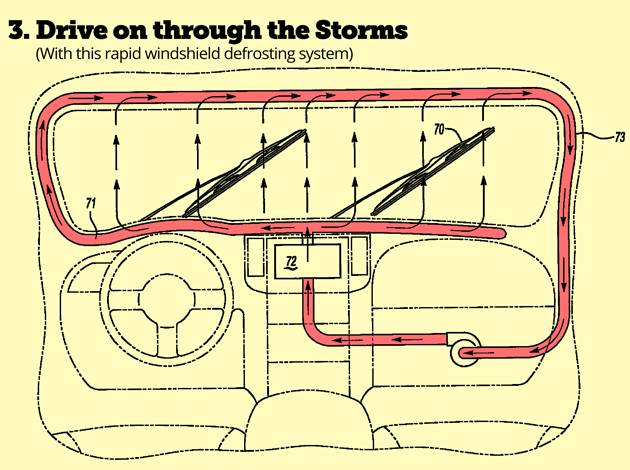 Imagine this scenario in the not-too-distant future: Your car has iced over in one of the many more extreme storms of a climate-changed world. It takes too long—and too much gas—to de-ice the car. Moreover, the engines in energy-efficient and electric cars mean there is less “waste heat” in the system that’s available for the purpose of traditional defrosting techniques.

A new defrosting system may just become the must-have for winter drivers, according to this patent for a “windshield washer fluid heater and system,” which attempts to defrost within seconds, not minutes. It may even, according to the language of the patent, reduce “energy dependence on foreign oil.” That actually isn’t too lofty a claim when you look at the auto industry roaring back to life. Since 2009, car production has nearly doubled; in July, US car and light-truck sales ran at an annualized pace of 15.8 million, up more than a million from the previous year. Any fuel savings count.

The invention passes engine heat that already exists through a new heat exchanger. Upon flicking the washer/wiper switch, washer fluid heats in a special new heater in a matter of seconds, and finally sprays out nozzles integrated into the wiper blades of the car, delivering a “continuous on-demand heated fluid deicing and cleaning action to the windshield and wiper blades.”

“This is so much more effective in clearing the windshield, because a traditional system needs to warm up 30-40 pounds of windshield glass before it can get to the outside ice,” which requires a lot of energy, says Jere Lansinger, a 74-year-old retired automotive engineer and inventor. A 40-year veteran of the industry in Detroit, Lansinger used to test defrosting systems to ensure they met the federal standard for safe driving: around 30 minutes for a clear windshield. “And 30 minutes is a terribly long time when you want to get moving in the morning.” So for the last 20 years he’s been tinkering on this invention in his garage. Now the defrost time is under a minute, he says.

Lansinger has commercial interest already. The invention has been bought by TSM Corporation, Michigan, and is being developed as a product called QuikTherm, which the company says is currently being tested at several North American automotive parts manufacturers. And that’s enormously gratifying for Lansinger. “Frankly it makes me feel better than any big royalties I’ll get.”

Verdict: ?A neat fuel-efficiency measure I’ve never thought about. And nothing’s worse than de-icing your car. 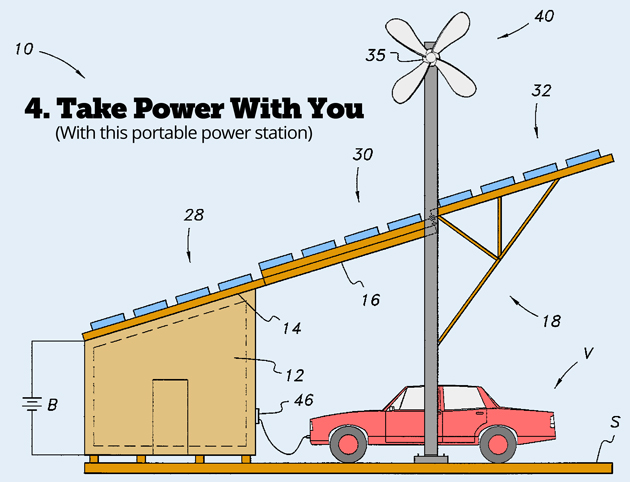 This might be my favorite for its simplicity: A portable power station that can be off-loaded from a trailer, unfolded, put up anywhere there’s sun or wind, and switched on. In the picture here, it’s being used to charge a car. But it can power anything it likes.

“I was tickled to death,” says Lynn Miller, the inventor from Crossville, Tennessee, about the day he was granted the patent, which he’s been working on for over three years. He’s now spent over $20,000 on the idea and is looking forward to getting a prototype up and running in the new year.

For Miller, it’s all about simplicity and reducing costs for the consumer. “We’d bring it out in the morning, and in the afternoon it’s working. It’s a plug-and play-system,” he says. He also likes the idea that having one of these in the company parking lot, or by the side of the road, gives ultimate green bragging rights: “It’s very visible, it reminds people day-in, day-out that you’re environmental.”

Miller’s plan is to also set up the portable power stations at schools and colleges to demonstrate the benefits of renewable energy. “It’s not just book knowledge, this can be turned into a classroom.”

Verdict: I want one.