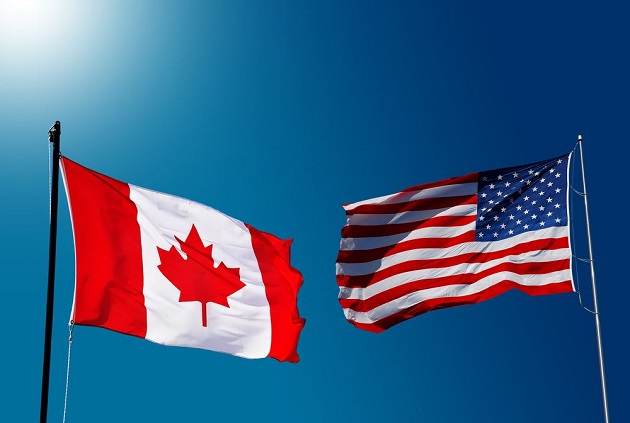 North America's climate policy laggards: Canada and the US rank 58th and 43rd in the world, respectively.<a href="http://www.shutterstock.com/pic-157243739/stock-photo-canadian-and-usa-flag-on-blue-sky.html?src=gdlxS0w6Oag1dA5lsjAkxw-1-45">SurangaSL</a>/Shutterstock

Recently, there’s been some good news when it comes to US greenhouse gas emissions: They’re actually going down. The bad news, though, is that despite this progress, we still only rank 43rd in the world for the overall effectiveness of our climate policies.

That’s the upshot of a new report by the Climate Action Network Europe and Germanwatch, a public policy think tank with offices in Bonn and Berlin. The two groups release an annual Climate Change Performance Index (CCPI) to assess how much individual countries are contributing to the global carbon problem, and how much they’re trying to do about it. The rankings include the globe’s 58 leading countries for greenhouse gas emissions—countries that, together, account for 90 percent of the globe’s carbon emissions from fossil energy use. Each country is assessed based its emissions trends, its energy efficiency, its progress on renewable energy, and its overall climate policies.

The US ranked 43rd last year and ranks 43rd this year as well, right between New Zealand and Croatia. We get particularly good marks for our 8-percent decrease in carbon emissions from energy sources in the last half decade, but we still fall well short of a stance that could be considered truly progressive or proactive on climate and energy. Still, if we want to gloat then it’s easy to compare ourselves to our northern neighbor, Canada, which was “the worst performer of all industrialised countries” and only fared better than Iran, Kazakhstan, and Saudi Arabia. (For more on Canada’s recent dismal climate performance see here.)

Here are the Climate Change Performance Index rankings for the top ten biggest emitters (most of which have declined in rank since last year): 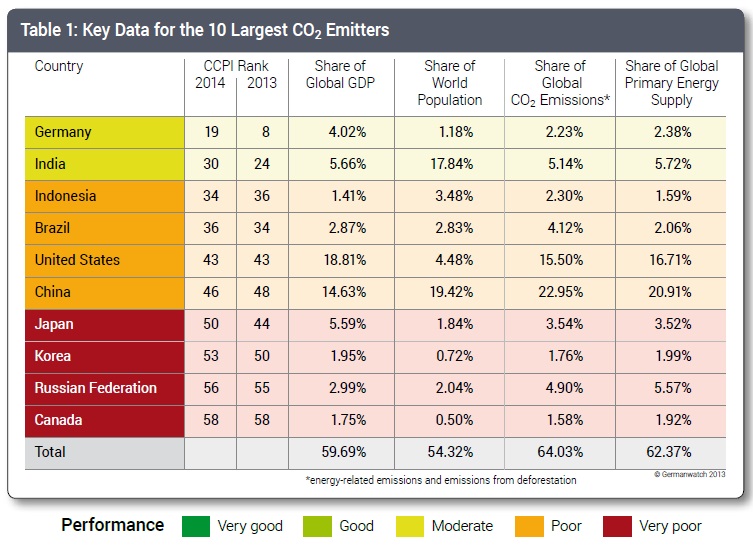 Based on the new report, here are some other surprising and intriguing facts about the nations of the world and how they’re performing in the uphill battle to save the globe from humans and their energy habits:

* Europe is one of the best performing regions overall, but there’s wide variability, especially among countries hit hard by the Eurozone debt crisis. On the one hand, bailed-out Portugal ranks sixth in the world on the CCPI index, suggesting economic hardship does not necessarily entail regression on climate policy. But on the other hand, bailed-out Greece ranks 47th, having “almost totally abandoned all climate policies” in the wake of its economic crisis.

* Morocco is a surprising success story, ranking 15th overall thanks to its “national solar plan” as well as a “national action plan against global warming.”

* Industrialized countries in the Pacific region have a lot to answer for. Japan slipped to 50th overall from 44th last year. Korea dropped to 53rd from 50th. And Australia plummeted to 57th thanks to its recent change in government.

* Large developing nations (the BRICs) are also lagging. India declined to 30th and Brazil slipped to 36th. Perhaps most important for the planet, China climbed to 46th in the rankings, a turnaround due to the fact that its dramatic rate of emissions growth is slowing somewhat, even as renewable energy investment continues apace. The Russian Federation is the worst of the BRICs, coming in at 56th.

Overall, there isn’t a ton of good news around the world this year when it comes to climate policy. No wonder, then, that the CCPI doesn’t put any country in positions 1, 2, or 3 of its rankings, noting that “no country is doing enough to prevent dangerous climate change.”