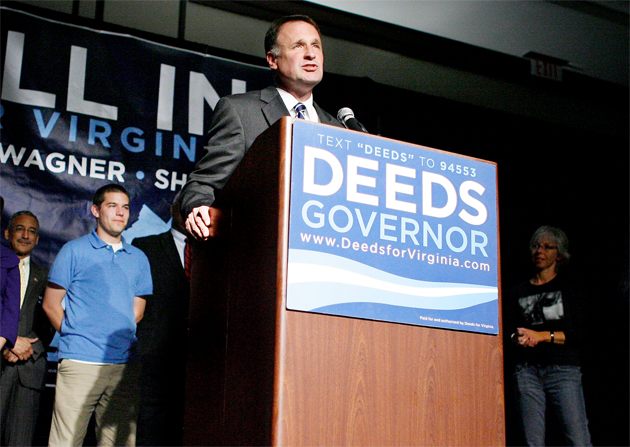 Creigh Deeds concludes his 2009 run for governor while his son looks on.Eva Russo/ZUMA

Update (11/20/13): Despite initial reports that there were no hospital beds available for Austin Deeds, the Washington Post reported that at least three facilities did have room. This post has been updated to reflect this.

Austin “Gus” Deeds underwent a psychiatric evaluation Monday at the Rockbridge County Community Services Board in Virginia. While at least three hospitals had beds available, hospital officials told the Washington Post, Deeds was still turned away.

The next day he likely stabbed his father, Sen. Creigh Deeds (D-Va.), in the face and chest before shooting himself, police said. The elder Deeds is currently listed in good condition.

Between April 1, 2010 and March 31, 2011, about 200 people in Virginia met the criteria for a Temporary Detention Order—meaning a physician of clinical psychologist saw a substantial risk of them causing harm to themselves or to others, or that they was unable to defend themselves—but were put back on the streets, according to a report from the state Office of the Inspector General. The Commonwealth isn’t the only state dealing with such problems.  States cut $1.8 billion from their mental health budgets from 2009-2011, according to a 2012 report from National Alliance on Mental Illness.

Also see our state-by-state interactive map of cuts to services for the mentally ill.

In a Mother Jones cover story six months ago, Mac McClelland wrote the harrowing story of her cousin Houston, who murdered his father after “a classic onset of schizophrenia.” When Houston’s violent outbursts started, his parents were told that calling the police was their only option—even though the local cops had killed  two mentally ill men in the past six years.

It’s also part of a pattern of exchanging one kind of institution—state mental hospitals—for another: jails. “In the 1950s, more than a half million people lived in US mental institutions—1 in 300 Americans. By the late ’70s, only 160,000 did, due to a concerted effort on the part of psychiatrists, philanthropists, and politicians to deinstitutionalize the mentally ill. Today there’s one psychiatric bed per 7,100 Americans,” Mac writes. But there’s been a corresponding rise of incarcerated inmates who are mentally ill. Between 1998 and 2006, the number of mentally ill people incarcerated in federal, state, and local prisons and jails more than quadrupled to 1,264,300. Those numbers have only gone up in the face of cuts to mental health programs due to the recession and austerity programs. See our timeline on the politics of deinstitutionalization here.