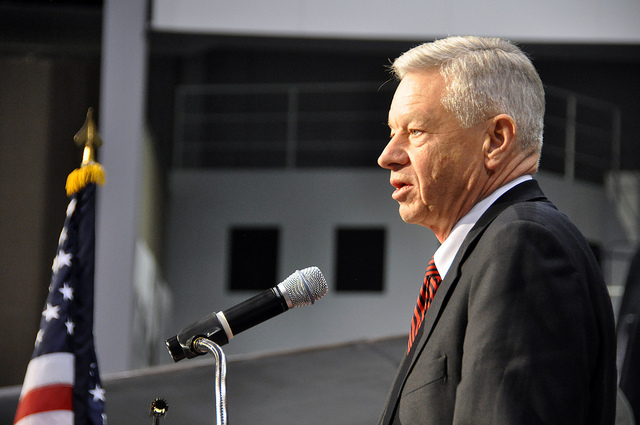 After the 2012 election, the Republican National Committee published a 100-page autopsy (PDF) nobly titled the “Growth and Opportunity Project” that pointed the supposed way forward for the humbled Grand Old Party. Regarding the dark-money-driven, super-PAC-mad politics of today, the document left little doubt about the party’s view: Let the money flow. The RNC called for ending the ban on “soft money” (the 1990s-era equivalent of dark money that fueled the Clinton White House scandals), raising contribution limits, removing the aggregate limit on how much overall money a donor can give in one cycle, and further deregulating money in politics at the state and federal levels.

But as the cost of winning an election increases, fundraising swallows up more of a congressman’s time, and candidates scramble to acquire their own super-PACs, several House Republicans are bucking their own party and demanding real reform.

Last week, Rep. Tom Petri (R-Wisc.) introduced a bill called the Citizens Involvement in Campaigns, or CIVIC Act, with the hope of spurring more small-dollar donations to political campaigns by reviving a pair of tax incentives. Petri’s bill would offer small donors two options. They could receive a tax credit of up to $200 (or up to $400 on a joint tax return) for donations made to a campaign or national political party. Or that same donor could claim a tax deduction of up to $600 (up to $1,200 for a joint return) for political donations. The intent is obvious: entice many more small donations to candidates.

When he unveiled his bill, Petri lamented both the cost of running for federal office and the growing clout of very wealthy donors in the political process. “Campaigns are becoming more and more expensive with no signs of slowing down,” he said. “And most would agree that the ideal way to finance a campaign is through a broad base of donors. Unfortunately, most Americans aren’t in the position to donate hundreds or thousands of dollars—but they want to get involved. We should be encouraging political participation.”

Fewer than 1 in 10 Americans have ever made a political donation, polls show. And for all of President Barack Obama’s success in reeling in scads of small donations (aside large contributions), politics remains dominated by big money. In last year’s elections, more than 60 percent of all donations came from donors giving more than $200, according to the Center for Responsive Politics. As for super-PACs and nonprofits, well, those are the playgrounds of millionaires and billionaires on both sides of the aisle.

Another House Republican, Rep. Andy Harris (R-Md.), recently introduced a bill of his own aiming to reform another cash-crazy part of congressional politics: so-called leadership PACs. Leadership PACs are different from your typical campaign committee. Instead of raising money for a politician’s own reelection bid, leadership PACs, which sprung up in the 1990s, allow members to raise money for distributing to their colleagues’ reelection campaigns. By spreading money around to your pals, a lawmaker can earn some goodwill and climb the ranks within his or her own party. Thanks to a loophole in the law, however, lawmakers often use their leadership PACs to pay for golf outings, tickets to NFL games, and other swanky junkets that politicians can’t pay for with their traditional campaign war chest.

Harris’ bill would close that loophole. “Public opinion of Congress is already low enough,” he said. “By banning the personal use of political committee funds, we can help improve the public trust in Congress.”

Let’s face it: In the Republican-controlled House, these bills stand little chance of passage. (The slew of Democrat-introduced reform bills, which tend to be more extensive and comprehensive, are also doomed.) Yet the fact that Republicans are joining the reform effort matters. In the past, when campaign spending has spiraled out of control and resulted in headline-grabbing political scandals, Congress’ instinct has been to look for the reforms already on the table and to pass one or some of those reforms in the scandal’s aftermath. And if the bills have a bipartisan imprimatur, all the better.

So Petri’s and Harris’ proposals may be DOA. But should another money-and-politics scandal strike, these bills will be ready to go—and they’ll have Democrats and Republicans ready to jump onboard.