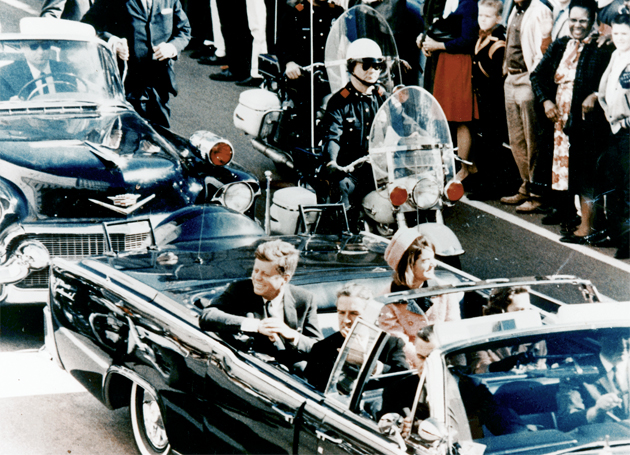 For 50 years, the murder of President John F. Kennedy has prompted dark suspicions about what led to those tragic moments in Dallas’ Dealey Plaza. Hidden-hand theories about the assassination fueled numerous movies and books in the years that followed and shaped a national culture of conspiracy. The Oswald-didn’t-do-it (or didn’t-do-it-alone) theory is the granddaddy of conspiracy theories; it paved the way for alternative (and sinister) explanations for a variety of events, including the assassinations or RFK and MLK Jr. and the 9/11 attacks. The JFK theorizing—which, in certain cases, posits that a cabal of government evildoers schemed the most notorious crime of 20th-century America—made The X Files possible.

Like many late-year boomers, I grew up fascinated by the speculation, poring over the latest “revelations” and initially believing the worst—at one point, when I was 13, my best friend and I called Parkland Hospital in Dallas and asked to be connected to the wing where the supposedly still-alive Kennedy was being housed—but I came to conclude that much of the conspiracy-mongering was bunk. In Slate, Fred Kaplan does an excellent job chronicling his own similar trajectory, so I won’t detail my conversion. But as I spent more time investigating and reporting national security matters, I came to the realization that government officials, spies, and operatives tend not to be sufficiently competent to pull off the murder of a president (with a well-placed patsy as the fall guy!) and then mount a subsequent and wildly effective cover-up. Still, I’ve resisted getting drawn too far into the Kennedy conspiracy debates—a true black hole. But if you’re asking, I do believe that Kennedy was likely killed as the result of underhanded alliances and government misdeeds. It’s just that what transpired was more nuanced than a CIA-Mafia-Castro-Soviet-Lyndon-Johnson plot.

I assume that Oswald shot the president. That loses me many JFK truthers. But the story of what brought this one man to the sixth floor of the Texas Book Depository is what’s important and probably indeed the tale of an actual conspiracy—one that was in plain sight at the time.

Oswald was obsessed with Cuba and a public advocate for Fidel Castro’s regime. In the summer of 1963, he opened a New Orleans outpost of the Fair Play for Cuba Committee, a pro-Castro organization. He tried to infiltrate a local anti-Castro group, and on August 9, 1963, he was arrested on Canal Street, after scuffling with three anti-Castro Cuban exiles. (More than a week later, he debated one of the Cuban exiles on the radio.) He printed up leaflets proclaiming “Hands Off Cuba”—a reference to Kennedy administration’s campaign against the Castro regime.

All sorts of wild plans were devised by Cuban exiles and their handlers for fomenting rebellion on the island. And, of course, there was the occasional plot to kill Castro.

Kennedy’s antipathy toward Castro was no secret. In the first months of his presidency, the CIA-backed assault at the Bay of Pigs was an embarrassing failure for Kennedy and the agency. The Cuban Missile Crisis of October 1962 justifiably caused a public freak-out across the United States. It was clear that Kennedy had a Cuban problem.

What wasn’t as clear was how Kennedy and his brother Bobby were prosecuting a secret war against Castro. In early 1962, the Kennedy White House approved Operation Mongoose, a plan cooked up by Brigadier Gen. Edward Lansdale that included economic warfare, psychological operations, and paramilitary action aimed at toppling Castro. The CIA station in Miami took the lead. (Years ago, I wrote a biography of Ted Shackley, who was the station chief at the time.) All sorts of wild plans were devised by Cuban exiles and their handlers for blowing up things inside Cuba and fomenting rebellion on the island. And, of course, there was the occasional plot to kill Castro.

But not much was immediately achieved on the boom-and-bang front. Toward the end of the Cuban Missile Crisis, Bobby Kennedy ordered Lansdale to cease all planning for sabotage and paramilitary operations. He didn’t want any “crackpot” individuals taking actions that could cause bigger problems. In early 1963, Operation Mongoose was terminated. Though Kennedy, as part of the resolution of the missile crisis, had pledged the United States would not invade Cuba, the CIA was ordered to keep devising paramilitary operations against Castro, and it continued working with its favorite exile groups. (One CIA official asked if an exploding seashell could be deposited in a spot where Castro went skin-diving.) On June 19, 1963, President Kennedy approved a program of major sabotage with the goal of encouraging resistance to Castro within Cuba. The CIA drafted a list of targets: power plants, oil refineries, railroad tracks, highways, and factories. The Miami station revved up its operations—with results. CIA-backed commando groups composed of exiles attacked an oil facility in Casildo Harbor and then assaulted a large sawmill on the coast of Oriente province.

This sabotage campaign was not acknowledged by the White House or widely known by the American public. But the Cuban leader routinely accused the aggressive imperialists of the north of mounting assaults on his island nation. His charges were occasionally reported in the US media, but generally dismissed as commie propaganda. Yet his accusations were often dead-on accurate. In one long tirade, Castro claimed that the CIA was using a 150-foot-long ship called the Rex in attacks against Cuba and that it was berthed in Palm Beach. He was correct. But this charge never became big news. (The CIA responded by drawing up plans to sell the vessel to another cut-out corporation and rename it.) The US media did not report that Cuba was indeed under assault by CIA-backed raiders.

But anyone paying close attention—and listening to Castro—knew what was going on. If not aware of all the details, he or she would have the sense that a secret war was being waged by Kennedy against Castro. Oswald presumably was such a person. There was a real reason for him to proclaim, “Hands Off Cuba”—and, thus, reason for him to feel enmity toward the president of the United States. (On November 22, near the moment Kennedy was shot, a CIA officer was meeting a Cuban agent in Paris and presenting him with a ballpoint pen rigged to contain poison for an attempted assassination of Castro.)

There are those who postulate that Oswald’s pro-Castro street activism was designed as a cover to hide his true motivation. Perhaps anti-Castro Cubans pissed off with Kennedy plotted a presidential assassination that they could pin on a pro-Castro operative to rally support for more direct US action against Castro. (At the time, however, Kennedy and his aides were approving sabotage action against Cuba.) Yet given Oswald’s assorted (and mind-bending) actual and possible interactions—with KGB officials, with pro- and anti-Castro Cubans, with FBI officials, with a businessman who was interviewed by the CIA, with folks connected to the New Orleans mob—it’s possible to imagine almost any conspiracy and find a possible Oswald link to back it up. After all, he was a former Marine who defected to the Soviet Union and un-defected and returned to the United States—and then two months before the assassination tried to return to Russia via Cuba. In early 1963, he attempted to assassinate a retired right-wing general who was famous for his screeds against communism.

Oswald was something of a Zelig. His past offers plenty of data points for anyone peddling an unofficial account of the Kennedy assassination. But in the swirl of supposition, there are hard and fast facts. The Kennedy conspiracy to undo Castro—via internal rebellion, paramilitary action, or assassination—did exist. It wasn’t a secret to Castro and his devotees. And in the last months of his life, Oswald at times was fixated on the Cuban issue. His public actions were those of a passionate and committed fan of Castro and the revolution. (The CIA, not surprisingly, would not reveal Kennedy’s get-Castro campaign to the Warren Commission, which was set up to investigate the assassination; consequently, the American public would not be able to fully evaluate Oswald’s actions.)

Five decades later, it’s doubtful that the mysteries of the Kennedy assassination—including Oswald’s motivation or motivations—will be fully resolved. The assassin was an odd and unstable fellow who never found a comfortable place in the Cold War world. He might not have fully understood all that drove him to shoot a president and shock a nation. So how can we? But if we’re compelled to make sense of this history-changing and heinous act, then an obvious starting place is the not-too-secret secret war on Cuba. It may well be that John Kennedy, the charismatic leader who embodied a new era and a changing time, did die as the result of a conspiracy—a conspiracy that involved the most powerful men in the world and that originated in his own office in the White House. And if this is the closest we can get to the truth so many years down the road, it still offers an important—and painful—lesson that deserves attention: Once the dogs of war (or secret war) are unleashed, there’s no telling where they will run.