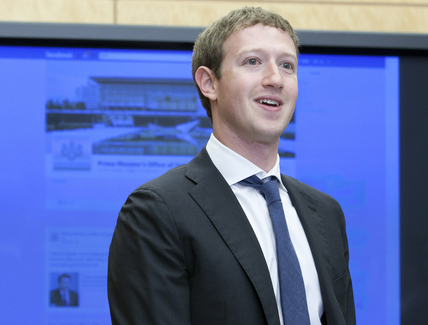 Most Americans assume that Silicon Valley, a shining beacon of US economic growth, will give a lot of dough back to Uncle Sam over the next few years. But thanks to a controversial loophole in US tax code, 12 tech companies—including Facebook, Twitter and Linkedin—are poised to avoid paying income taxes on their next $11.4 billion in earnings, netting the companies a collective savings of $4 billion, according to a report put out this week by the Citizens for Tax Justice (CTJ).

The way the law stands now, US companies get big tax deductions when they pay their employees in stock options. For example, if an executive is given the option to buy a million shares of a company at five cents a share and later cashes those options in when they’re selling for $20 a share, the company can deduct the price difference in tax breaks, even though they never actually paid that higher salary. This is especially profitable to emerging industries, like tech, where companies give stock options to young executives when they’re still coding out of their parents’ basements. These tech employees have an incentive to stay with the company over the long-term, and then cash in once the company is profitable. That means that companies get to store these tax breaks until—ta-da!—they’re not paying income taxes for years. Here’s how much these 12 companies have saved: 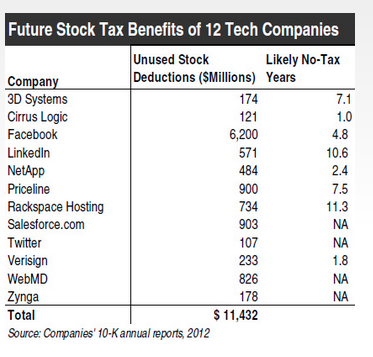 Twitter is the latest company that stands to profit from this, since it just went public. But in this latest report, CTJ determined that Facebook still has the highest amount of stock deductions to cash in—about $6.2 billion worth, allowing it to avoid income taxes for almost five years. And it’s not just tech companies. In April, CTJ found that 280 Fortune 500 companies have benefited from this break in the last three years alone.

Tony Nitti from Forbes argues that even with this loophole, Uncle Sam isn’t losing money, since as Facebook deducts $5 billion in taxes from Mark Zuckerberg’s stock, Zuckerberg is taxed on $5 billion in income, and the individual rate is higher than the corporate rate. Facebook did not immediately respond to comment on the report, but a spokesperson told the Huffington Post earlier this year that “it’s a mistake to look at only the corporate tax revenue while ignoring the billions of taxes paid from initial shareholders.”?

But Matt Gardner, executive director of the Institute on Taxation and Economic Policy, tells Mother Jones that the IRS is still losing money, since Zuckerberg would be taxed on his income no matter where it came from, and under the loophole, the company is able to write off his income without corporate income taxes.  “If Facebook buys Zuckerberg a lottery ticket for a buck, and then he wins a million dollars, should the company be able the write off that million? That’s absurd, but that gives you a sense of what’s going on here,” says Gardner.

Bipartisan lawmakers have recently started to denounce this loophole, and in February of 2013, Senator Carl Levin (D-MI) proposed a bill that would limit how high companies could go with their stock-option tax breaks.

“People recognize that these loopholes are not fair. They are wrong in every sense that a policy can be wrong—wrong fiscally, wrong economically, wrong ethically,” said Levin in a statement.