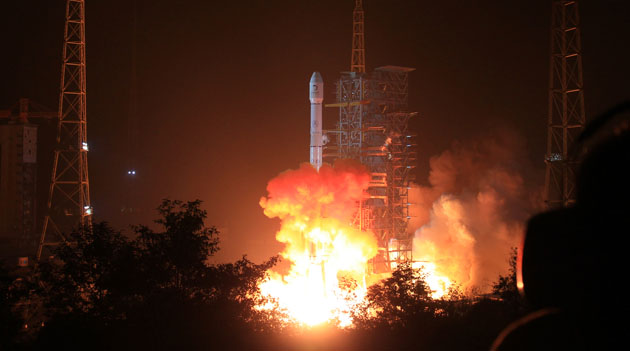 China will soon become the third country to ever land a spacecraft on the Moon’s surface. Early Monday morning, the Chinese government launched its first lunar probe, the Chang’e-3. The spacecraft should deposit the “Jade Rabbit” rover on the moon’s surface sometime in mid-December. The rover will conduct scientific experiments on the Moon’s Bay of Rainbows, a field of basaltic lava.

Chang’e-3 will be the first probe to touch down on the moon—rather than bluntly impact its surface—since the Soviet Union sent a mission there in 1976. The US hasn’t landed on the moon since the last Apollo mission in 1972. This latest launch is the second stage of a three-step plan for China’s lunar program. They’ve already completed step one (orbiting the moon) and are aiming to complete step three (returning an unmanned vessel with samples from the moon) by the end of the decade.

These missions are laying the groundwork for the country’s goal to land astronauts on the moon sometime around 2025. But those lunar ambitions are just one component of a broader Chinese space program. They’ve launched a space lab, which astronauts visited earlier this summer, and have plans for a permanent space station to rival the International Space Station (ISS), the orbiting station built by the US, EU, Russia, Japan and Canada. Not all of China’s missions are so benevolent, though: in 2007 China tested a missile that can destroy satellites, a technology that has set the US military on edge.

China’s advancements are a marked contrast to the US’s lack of political interest in space research. NASA is still the world’s preeminent authority on space exploration—the agency essentially leads the coalition in charge of the ISS and conducts the most ambitious scientific research of the solar system—but the program has diminished in stature since the heydays of the Apollo era in the early 1970s. NASA no longer can send its own astronauts to space. The agency has had to rely on Russia’s Soyuz spacecraft to ferry astronauts to the ISS since its Space Shuttle program ended in 2011. Upon taking office, President Barack Obama canceled George W. Bush’s lofty ambitions to return humans to the moon by 2020. Instead, Obama directed NASA to explore capturing an asteroid, but the proposal has been tepidly pushed by the president and stymied by congressional Republicans. NASA—an agency where 97 percent of employees were furloughed during October’s government shutdown—has also warned that any grand schemes for further space exploration will just be idle talk if sequestration cuts, which took nearly $1 billion out of the agency’s budget this year, continue into 2014.